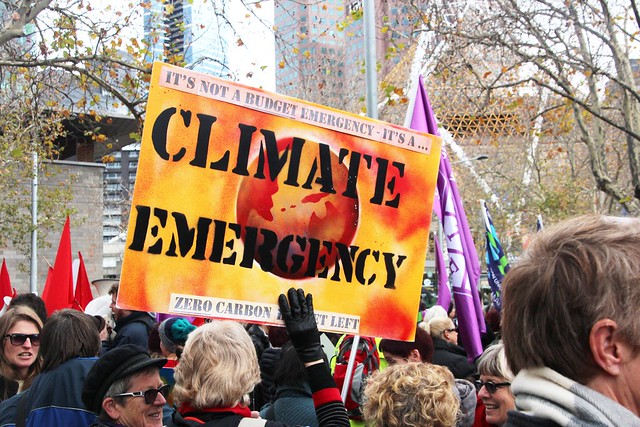 To the Environmental Community:

In 2003, political strategist Frank Luntz wrote a confidential Republican Party memo on what he called “the environmental communications battle.”

In that memo, Luntz advised Republicans to change the words they used to meet their ends. “The scientific debate is closing but not yet closed,” he wrote. “There is still a window of opportunity to challenge the science,” Luntz proposed using the phrase “climate change” instead of “global warming.” His reasoning: “…while global warming has catastrophic communications attached to it, climate change sounds a more controllable and less emotional challenge.”

Like it or not, Frank Luntz had a point. When I was growing up in New England, “climate change” meant the changing of the seasons: spring, summer, autumn, and winter.

Today, in the midst of increasingly alarming scientific studies and giant storms, the necessary response has been diminished by this widely-accepted softening of the words we use to describe the dangerous reality that stands before us. Language matters!

I recently reached out to two leading and widely respected ecologists, Paul Hawken and Bill McKibben, to get their input on the mainstream usage of the benign phrase “climate change.” McKibben now uses the far more potent phrase “climate chaos.” Hawken believes the proper term is “climate volatility.”

One thing is abundantly clear―it’s time to change the words to meet the peril! As Confucius said:

Would you join us in replacing the use of the all-together benign phrase “climate change” with variations of more grave language? Consider the following alternatives: climate crisis, climate catastrophe, climate disruption, climate upheaval, or even global warming. Whatever choice of words, we should stop using “climate change.”

11 thoughts on “An Open Letter to the Environmental Community: Language Matters! by Ralph Nader”