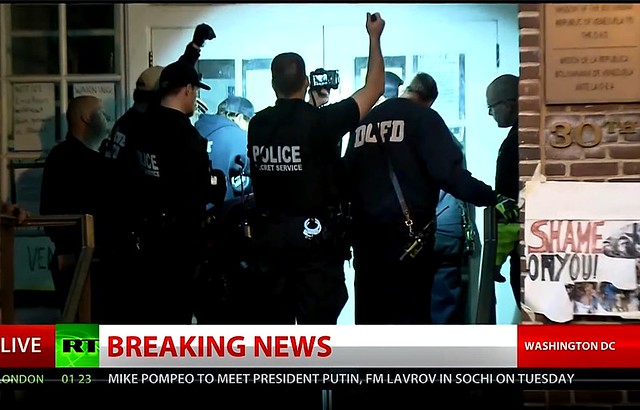 Rick Sanchez breaks the news of the departure of the pro-Maduro Embassy Protection Collective from Venezuela’s embassy in Washington, DC following a trespassing notice from authorities stating that opposition leader Guaido’s “ambassadors” have legal right to the building and ordering its occupants to evacuate. Pro-Guaido protestors chant and cheer as the US Secret Service seems poised to evict the handful of activists who remain inside.

A final message from the Venezuelan Embassy Protection Collective as police prepare to unlawfully raid the building pic.twitter.com/CL1qLVARlg

I wanted to save the portrait of Bolivar in which he is depicted as less European looking, because one of the first moves the racist Venezuelan opposition made after taking over the National Assembly was to remove those images of El Libertador. ✊🏽 https://t.co/hgpQMbXgro

Rick Sanchez anchors breaking news of the standoff outside Venezuela’s embassy in the US. US Secret Service Police seemed poised to forcibly evict the handful of pro-Maduro “protectors” who chose to remain inside despite being ordered to evacuate or face criminal prosecution. But they remain defiantly locked inside as pro-Guaido demonstrators continue to jeer and threaten them. RT America’s Michele Greenstein provides live on site coverage of the chaos. Former US diplomat Jim Jatras, investigative author and journalist Max Blumenthal and RT America’s Dan Cohen join Rick Sanchez by telephone to share their insight and analysis

UPDATE: #EmbassyProtectionCollective members remain inside. They stated to US Secret Service explicitly and repeatedly they will not leave if it means the US violates the Vienna Convention by making an illegal eviction and unlawful arrests pic.twitter.com/loVIYyODEJ

Mara V, lawyer of the #EmbassyProtectionCollective explains what happened today.

Journalist @RealAlexRubi spoke to @N2Sreports after leaving the Venezuelan embassy in Washington just a short time ago. He had been inside reporting, alongside the Embassy Protection Collective since April 24th. pic.twitter.com/L9dz62m5Xb

Read the memo released by the Embassy Protection Collective earlier today for more clarification on the currrent situation https://t.co/KulYcsG60x

BREAKING: After drawing back last night, US Secret Service reportedly about to illegally seize Embassy of Venezuela and arrest #EmbassyProtectionCollective members, in violation of international law https://t.co/PJZuPlvw2z

UPDATE: Situation remains stable for now. Please join us daily for vigils from 6 to 8pm to show support for #EmbassyProtectionCollective pic.twitter.com/3Jzc7qWlB4

Bobby Bobinson explains what a protecting power agreement is pic.twitter.com/RepeZQbO9e

RT America’s Michele Greenstein reports for News.Views.Hughes from outside the Venezuelan Embassy, where the remnant of pro-Maduro “protectors” who remain inside the building. Meanwhile, police have established a perimeter around the building and following the commotion of Monday night, pro-Guaido protestors optimistic about taking over the embassy.

RT America’s Michele Greenstein reports live for the News with Rick Sanchez from outside the Venezuelan embassy in Washington, DC. Four pro-Maduro “protectors” remain defiantly ensconced in the building. A Secret Service Police presence and throng of pro-Guaido protestors remain on site.

FAQs On The Venezuelan Embassy Protection Collective In D.C.