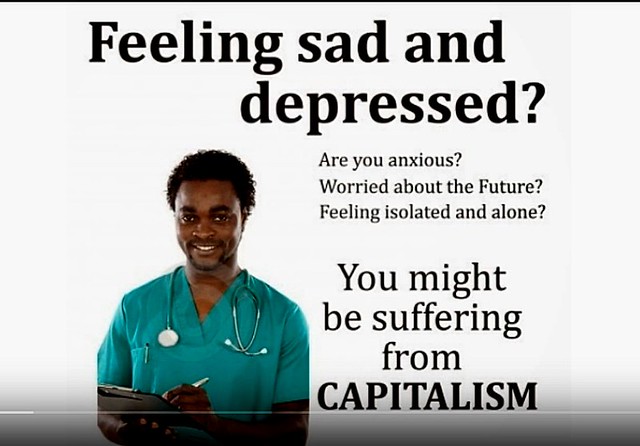 “However, the social, political, and economic organization of society must be recognized as a significant contributor to people’s mental health, with certain social structures being more advantageous to the emergence of mental well-being than others. Capitalism can never offer the conditions most conducive to achieving mental health. Oppression, exploitation, and inequality greatly repress the true realization of what it means to be human.” — David Matthews, 2019

by The Anti-Social Socialist
Writer, Dandelion Salad
May 17, 2019

Chris Hedges: America, the Land of the Desperate and Doomed, interviewed by Greg Palast

We Must Keep Despair At Bay In The Siege Waged By The Forces Of Destruction And Greed!

Chris Hedges: We Desperately Need the Clarion Call of the Radical Poet to Give Words to our Despair + The Wreckage of a Soul by Soraya Boyd

17 thoughts on “What is the Relationship Between Loneliness and Capitalism? by The Anti-Social Socialist”