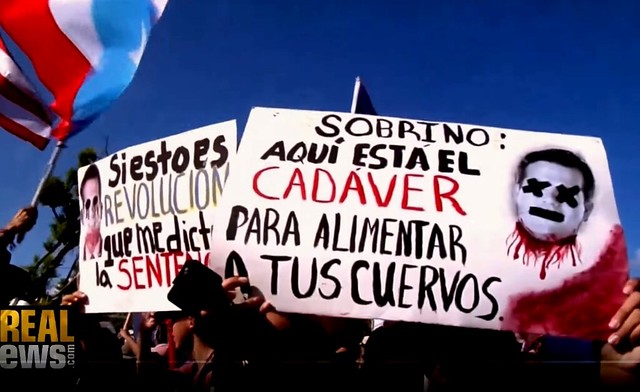 The souls of Puerto Ricans everywhere should burn with indignation as they read through the text messages by Gov. Ricardo Rossello and members of his administration written in a group chat. On July 13, the Center for Investigative Journalism in Puerto Rico published 900 pages of the messages.

The contents ranged from openly defaming valiant women of the island who are fighting against sexual violence to insulting folk heroes such as Carlos Gallisa who have fought alongside the toiling masses in their quest for freedom, equality and independence. Perhaps the most macabre and damning part of the messages discuss the government’s coverup of the actual death toll of thousands of Puerto Ricans from Hurricane Maria, with some members making jokes at the expense of the dead. This is disgusting behavior ubiquitous among the ruling cliques of capitalist nations.

This “Telegram Gate” controversy is just the newest chapter in corrupt practices committed by successive colonial administrations that have plagued the island since famed genocidal conqueror Juan Ponce DeLeon invaded this beautiful land in 1514, beginning the genocide of the Indigenous Taino people.

Thus, it is not surprising that there has been such a militant response by the people calling on colonial governor Rossello to step down. On July 17, half a million people demonstrated in San Juan. By July 22, there had been 10 consecutive days of protest.

Many bourgeois reporters will claim that the only reason why these protests are occurring is allegations of corruption. But corruption is just one part of the story.

The contradictions of living in a colonial entity have grown more acute for a majority of Puerto Ricans on the island. Under Rossello’s administration, the little sovereignty Puerto Ricans had left to deal with their economic situation was given to an unelected board of supervisors, led by the imperialist U.S. government, under the PROMESA agreement. The Puerto Rico Oversight, Management, and Economic Stability Act is a 2016 U.S. federal law that established the oversight board.

The arrangement was made under the guise of “fiscal responsibility” due to the massive amount of debt accrued by Puerto Rico, an island that has been strangled economically by the United States for over 120 years. This board put in place austerity programs that are blatant machinations of class conflict.

‘Refugees on our own island’

The austerity drive aggravated an already decrepit economy, thus continuously leaving Puerto Ricans in the dark while billionaires scramble to buy up everything on the island due to the massive privatization campaign.

Then came Hurricane Maria, with our beleaguered island left alone after this massive storm hit, leaving death and destruction everywhere.

Our people became refugees on our own island, snubbed by the government that claims Puerto Ricans are rightful citizens of the United States of America. But the fascist U.S. president hosted a press conference on the island during which he threw paper towels at desperate families to “help” them.

All these events and numerous others have built up a rage in the hearts of Puerto Ricans, thus producing the outpouring of demonstrations on the island and in the diaspora.

The protests have humanized a beleaguered people. Our imperialist overlords have continuously shown that they value profits over our wellbeing. Now we are showing that we will not stand for this exploitation any longer. Ousting Rossello is just the beginning. The people have risen, and we will not stop until our island is free.

‘The people are forever strong’

This is a momentous task, but we are up for it. We shall walk in the footsteps of our revolutionary ancestors who rebelled against the Spanish under the Taino leader Agueybana II, on the path of the brave souls of Lares who rebelled against Spain in 1868, and many other figures who have defied the U.S. head on, like Albizu Campos, the valiant people of Jayuya and Oscar Rivera Lopez. Our fight is just, and we will win in the end for imperialism is a paper tiger and the people are forever strong!

The struggle ahead will be long, but with the solidarity of the international working class we will triumph. This means that we, the Puerto Rican revolutionaries, must also adopt a proletarian internationalist outlook. For our oppression under U.S. imperialism is an oppression felt throughout the world.

We must stand steadfastly with the Bolivarian revolutionaries of Venezuela in their struggle against U.S.-backed counterrevolutionaries. Puerto Rico plays an especially important role in this issue, since multiple times Gov. Rossello has offered Puerto Rico as a place for the U.S. military to base its insurgency against the Venezuelan people.

We must ensure solidarity with the Caribbean nations, especially Cuba, which have stood in solidarity with Puerto Ricans from the beginning, always calling for the end of U.S. colonial oppression of our nation. We must also stand firmly with Haitian revolutionaries who have continuously struggled against U.S. imperialism.

Thus, Puerto Ricans in the mainland United States have a very special role to play. We must continue to put pressure on the U.S. government to withdraw the blockades and sanctions levied on nations such as Cuba, Nicaragua and Venezuela. These are manifestations of class warfare against revolutionary nations and must end.

‘Solidarity with peoples of other colonies’

Also, Puerto Ricans must show solidarity with the peoples of other colonies of the United States, such as Guam, Mariana Islands, Hawaii and the Philippines. Currently there is a righteous struggle by Indigenous Hawaiians whose holy lands are slated to be desecrated in the name of science. We must affirm our solidarity with the Indigenous Hawaiians whose nation, culture and quality of life has been decimated due to U.S. imperialism.

Another main struggle occurring right now is in the Philippines against fascist President Rodrigo Duterte. Since his election he has begun the policy of extrajudicial killing of poor people in the name of the “war on drugs.” Sounds familiar, eh?

Although on paper the Philippines became independent in 1946, the United States has continuously undermined the struggle for democracy by supporting and funding multiple dictatorships. Duterte is no different. Therefore we must stand in solidarity with Filipinos and all other peoples struggling for freedom.

This is a heavy task, but the strength of the working class is unmatched. Together we will build a new world out of the ashes of the old!

The political crisis in Puerto Rico is deepening, with a massive strike and hundreds of thousands taking to the streets, demanding Governor Rosselló resign for his corrupt management of the island. Activist Julio Lopez Varona analyzes the situation.

Why Puerto Rico is ‘a crisis made in Washington’

Embattled Puerto Rican Governor Ricardo Rossello has been exposed for misogynistic and degrading language and for making fun of hurricane victims. But are there deeper reasons for the ongoing mass protests on the island territory? Sociology Professor Cesar Ayala, co-author of Puerto Rico in the American Century, joins Rick Sanchez to share his insights. He argues that “the island has become ungovernable” after blunders in Washington caused an “exodus of population and downward economic spiral” in Puerto Rico that has reached a boiling point.

The Governor of Puerto Rico Ricardo Rosselló has announced his resignation following days of massive protests demanding his impeachment over leaked texts with allies where the politician used homophobic and sexist language. READ MORE: https://www.rt.com/news/465004-puerto-rico-governor-resigns/

The Debt Before the Storm by Lance Selfa + Puerto Rico Devastated By Hurricanes, Colonialism by Berta Joubert-Ceci