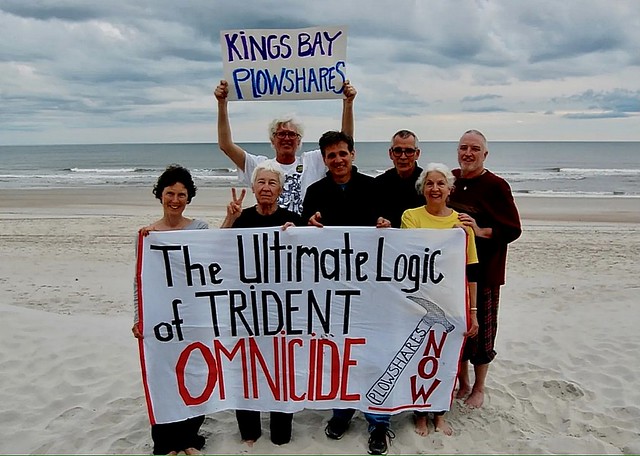 Chris Hedges talks to New York Catholic Workers Martha Hennessy and Carmen Trotta about breaking into the Kings Bay Naval Submarine Base to charge the US government with crimes against peace on April 4, 2018. The peace activists, known as the Kings Bay Plowshares 7, were arrested and went on trial this week in Georgia, following allegations of trespass and damage to government property, among others.

Kings Bay is the largest nuclear submarine base in the world, with six ballistic missile subs and two guided missile subs. Over the past four decades, activists in the Plowshares movement have taken part in about 100 similar actions at nuclear arms facilities, beginning in 1980 at the General Electric nuclear missile plant in King of Prussia, Pennsylvania.

This is a breaking news update for our supporters. A fuller update will be forthcoming.

BRUNSWICK, GA – More than 18 months after they snuck onto the site of one of the largest known collections of nuclear weaponry in the world, a jury found the Kings Bay Plowshares 7 guilty of all four of the charges brought against them.

The defendants face more than 20 years in prison for destruction and depredation of government property in excess of $1,000, trespassing, and conspiracy.

“The Pentagon has many installations – and we just walked out of one of them,” Colville said outside the courthouse. “It’s a place where they weaponize the law. And they wield it mostly against the poor, the people who have all the red lined neighborhoods in this county know that very well.

“And once in a while the people who are privileged like us get a taste of it. And when we do we should hear the word guilty as a blessing on us because it gives us an opportunity to stand with people who hear guilty all the time every day.”

The seven expect to be sentenced in 60 to 90 days. Until then, six of them have been released under bond conditions each had prior to trial.

Late at night on April 4, 2018 Mark Colville, Clare Grady, Martha Hennessy, Fr. Steve Kelly, S.J. Elizabeth McAlister, Patrick O’Neill, and Carmen Trotta used a bolt cutter to enter a remote gate at Naval Base Kings Bay in St. Mary’s GA. They walked two miles through swamp and brush. They then split into three groups and prayed, poured blood, spray painted messages against nuclear weapons, hammered on parts of a shrine to nuclear missiles, hung banners, and waited to be arrested.

During the course of the trial, which began Monday morning, the defendants and their supporters had expressed pleasure with the unexpected amount of information they had been able to provide to the jury about their reasons for undertaking their protest. Federal Judge Lisa Godbey Wood had issued an order late last Friday night restricting any evidence or testimony having to do with a necessity defense, international law and treaties restricting nuclear weaponry, and religious and moral reasons.

“I really think that the verdict was, frankly, reactionary,” Trotta told supporters outside the courthouse. “They (the jurors) heard a lot. The judge allowed them to hear a lot. And it’s a little frightening that nuclear weapons could be hidden in plain sight. We have to understand that we are a remnant.… We remain a remnant of the spirit that I think was stronger in our country at other periods on time.

The struggle continues. Please support this profound sacrifice by these seven requires generosity. Your support of the Kings Bay Plowshares 7 will help cover the ongoing costs surrounding this trial and social change effort. You can give at our GoFundMe site and checks can be sent to Plowshares, PO Box 3087, Washington, DC 20010. Further details check the website: kingsbayplowshares7.org.