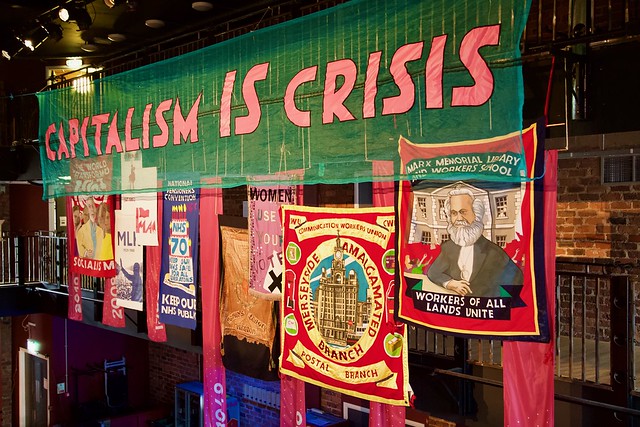 During the 1970s, the capitalist class experienced declining profits amid a recession. The response from the system was to abandon the welfare state and move towards neoliberalism, a model of austerity, privatization, deregulation, and regressive taxation that’s since enriched the upper class amid ever-increasing inequality. Margaret Thatcher said that “there is no alternative” to neoliberalism, and the ruling class continues to believe this, because social democracy would bring back down the corporatocracy’s profit intake.

So what will be their response when an economic crash comes that’s estimated to be larger than the last one and is accentuated by record U.S. inequality? The losses of assets for the super-rich in this month alone are around $1.5 trillion, and combined with the current pandemic, the ruling class is clearly concerned about unrest right now. There’s been a spike in demand for private jets and an exodus to the wealthy’s secluded second homes. Troops are being prepositioned in major cities, and in smaller ones like Jackson, Mississippi. The National Security Council has been managing the U.S. government’s overall response to the virus in close coordination with U.S. intelligence agencies and the military.

As America acts like a failed state, with the White House failing to adequately assess or respond to the current economic and health threats, I get the impression that we’re seeing the early stages of a breakdown of capitalist society as we’ve long known it. People are stockpiling goods. Households are losing income as communities are forced to stay home. In the background of daily working class life looms a continual series of market plunges that foreshadow the coming larger economic breakdown. When the full effects of this economic downturn start being felt, whether next month or next year, what happens afterward will depend upon the responses from the two great forces of political power: the ruling class and the revolutionary proletarian movement.

The ruling class will respond with national security state crackdowns similar to the one after 9/11. Whitney Webb wrote this week about the recent actions of the military/intelligence complex:

“The coming government response, the agencies largely responsible for crafting it and its classified nature deserve public scrutiny now, particularly given the federal government’s tendency to not let ‘a serious crisis to go to waste,’ as former President Obama’s then-chief of staff Rahm Emanuel infamously said during the 2008 financial crisis. Indeed, during a time of panic — over a pandemic and over a simultaneous major economic downturn — concern over government overreach is warranted, particularly now given the involvement of intelligence agencies and the classification of planning for an explosion of domestic cases that the government believes is only weeks away.”

Throughout the next decade and beyond, society will be made less functional by this meltdown of the economy, exacerbated by increasing climate change disasters and health crises like the Coronavirus. The U.S. dollar will continue to decline, felled by the rapid breakdown of American global power.

There will be escalating reactions from the system, whether these reactions consist of more U.S. government surveillance (which is already being considered), crackdowns on free expression (which is happening as Facebook tightens censorship amid the virus), or campaigns against rival powers like China (which are happening as the U.S. media and political establishment scapegoat China for the crisis). And all the while, the corporate state will refuse to alleviate the hardship of the lower classes.

To avoid a societal breakdown during the Coronavirus quarantine, the ruling institutions are giving working people paid sick leave, prohibiting evictions, suspending broadband data caps, and stopping the charging of interest rates on attending college. There’s also talk of giving a free government money grant to people throughout the crisis, as Hong Kong’s capitalist government has already done. But these moves won’t precede the implementation of higher wages, universal healthcare, or bank nationalization. And the big banks are trying to use the crisis to achieve extreme Wall Street deregulation.

It won’t end there. “Look, we know this script,” Naomi Klein says about how the ruling class will exploit the crisis.

“In 2008, the last time we had a global financial meltdown, the same kinds of bad ideas for no-strings-attached corporate bailouts carried the day, and regular people around the world paid the price. We know what Trump’s plan is: a pandemic shock doctrine featuring all the most dangerous ideas lying around, from privatizing Social Security to locking down borders to caging even more migrants. Hell, he might even try canceling elections. But the end of this story hasn’t been written yet.”

As poor and working people, we’re on our own amid this upheaval. Aside from the crumbs the ruling class will throw at us, living standards will continue to get worse throughout the capitalist world as policy is shaped by disaster capitalism. So what can we do to fight back? In the short term, our course of action should be to exacerbate the dysfunctionality of the crisis by organizing strikes in key sectors of the economy.

The economy is dependent on a very small minority of workers bagging groceries and delivering things. The means to have them come together and refuse to go to work are beyond my personal influence, but I should encourage these individuals to start doing this in groups. And our demands amid this strike should be made clear: a permanent suspension of evictions, a universal healthcare program, a federal minimum wage of $15 (or higher), and a universal food and housing program.

If we don’t get these basic needs met—as I think we almost certainly won’t—after the virus risks go down we’ll have to mobilize in the streets. A mass protest movement needs to be realized in the United States in the same vein as the ones in France, Chile, and elsewhere, and the government’s failures during the Coronavirus should become the catalyst of outrage that produces this revolt.

As the uprising continues, we’ll be able to more quickly grow the American communist parties that have the will to overthrow and replace the capitalist state. Even now, it’s become abundantly obvious that capitalism isn’t working, and therefore that socialism is the solution. China, Vietnam, and Cuba have dealt with the virus phenomenally, showing that their models of proletariat dictatorship—a democratic state controlled by the workers—is what societies need to withstand crises like these. As the economic situation develops, Marxism-Leninism’s appeal will become more clear.

For now, the contradictions of capitalism are being exposed in ways so stark and confusing that both the system and the masses seem unable to confidently respond. The government can only manage some haphazard policies involved shutting down sectors of public life, with the rest of the details being left to individual institutions and people. Hints are appearing of a reactive police state crackdown, and the capitalist class and its kleptocratic government allies are trying to do whatever they can to exploit the situation. This is what the imperial core looks like during the emergence of a major shock, one that’s only so impactful because imperial power and global capitalism have long been heading for some sort of collapse.

Investors are finally showing signs of buying into the Federal Reserve’s desperate bid to rescue Wall Street. Economist and founder of Democracy at Work Prof. Richard Wolff joins Rick Sanchez to discuss the Trump administration’s enormous stimulus package and whether it can resolve the current financial crisis. He argues that “we are in a situation for which no precedent exists.” He also points out that we are seeing the economic results of failing to prepare for the COVID-19 coronavirus pandemic.

A Coronavirus Bailout Will Save Corporations, Not Workers

What happened to the cash from the last bailout? Industries spent it all on stock buybacks and are now looking for billions more in relief from the impact of coronavirus.

Top 10 Reasons the U.S. Government Is Blowing This, by David Swanson

13 thoughts on “The 2020 Coronavirus Economic Crash and The Crisis of Capitalism by Rainer Shea + Richard Wolff: This Is Like Nothing Ever Experienced”