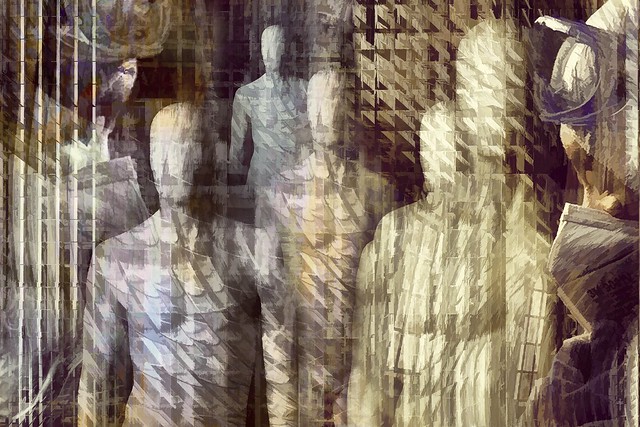 At a certain point in an age of absurdity the normalization of madness becomes so common that it is almost indiscernible to most in the thick of it. Indeed, late capitalism, the stage which is undoubtedly preceding complete barbarism, has produced an endless stream of absurdities which not only insult the senses of those who possess a conscience and a modicum of critical thinking skills, but can also deliver a fatal injury as we are seeing unfold in real time with tepid or reckless responses to the Covid-19 pandemic.

Donald Trump’s ceaseless spin of the truth is already legendary. But his indifference to the deadliness of the virus has been amplified by groups like the far-right Freedom Works who have quietly supported anti-shutdown protests around the country. The malignancy of Trump’s sowing confusion via baseless accusations and endless deflection is exacting an extraordinary toll in American lives. And the dissonance is equally jarring. At many of these protests, socially liberal leaning anti-vaxxers are uniting with white supremacists and gun wielding militias in a bizarre display of solidarity.

The demand has not been for increased financial support, rent freezes, hazard pay, student debt forgiveness or universal healthcare as other protests have been doing. It has been for the government to “open up” businesses for non-essential services where working people are potentially exposed to the deadly pathogen. Some of the signs at these demonstrations speak volumes about the privilege of many of the protesters, saying they want a haircut, or their nails done, or to play a round of golf. Theories with little to no evidence on how the virus came about or if it is even a real thing, are peddled generously.

Unsurprisingly, many of the theories being thrown around these days scapegoat China; and this only feeds into Trump’s ramped up war of propaganda against the nuclear armed country and his unabashed racism at home. The latter was on display this month when he told an Asian American reporter to “ask China” about the United States’ record on addressing the pandemic. It is no coincidence that these rallies to end the supposed “lock down” are primarily made up of white middle-class Americans either. After all, many of them have been untouched. The worst of this pandemic has disproportionately impacted people of color, indigenous communities and migrants.

The economic landscape has also tipped the scale into utter absurdity, even more so than ever before. Jeff Bezos, the richest man in the world, will likely become the world’s first trillionaire. And much of this is due to him profiting from the desperation and social conditions of the pandemic. That we, as denizens of this planet, can hear that bit of insanity without revolt is quite telling. While tens of millions of people have lost their livelihoods in this time of unprecedented crisis, the wealthiest have only become wealthier, and much of that thanks to direct government bailouts. It is worth noting that as Bezos gets closer to the trillion dollar mark, his business has been cutting hazard pay as his workers become ill with Covid-19. They were given thank you t-shirts as compensation for the life threatening risks they take to gain him his wealth. Even prior to the deadly pandemic, Amazon was a dangerous place to work. Long hours, injuries from heavy lifting and machinery failures were common. The pandemic has only amplified these things in far more deadly ways.

Indeed, over the past couple months, we have witnessed the depths that the uberwealthy can sink to. Elon Musk, the man who wants to colonize Mars and whose net worth is approximately 36 billion dollars, has tweeted endlessly about the pandemic. Originally likening it to the common cold, he has been relentless in demanding the “opening up” of the economy, linking health measures to prevent contagion to idiotic claims of tyranny, all while he remains safely at home at his palatial estate. Of course, Trump adored his sickening online sycophancy. Along with a cadre of senators, Glenn Beck, and most of the staff of Fox News, the calls for working people to get back to work has echoed down the corridors of power. Meanwhile, almost all of them remain safely at home, comfortably tweeting and airing their opinions to the beleaguered masses.

In a country built upon land theft and slavery by the elite ruling class, which has hardly had a year without attacking another nation, the words of the wealthy are taken with almost as much reverence as the utterances of high priests were in ancient civilizations. In fact, there is no separation of church and state because capitalism is the state religion. And far too many Americans have been conditioned to adore their billionaires and celebrities as demigods, even when they continually rob them of the fruit of their labor. There are signs that this adoration is fraying as each day passes. Vapid Twitter posts from celebrities saying, erroneously, that “we are all in the same boat” are growing tedious; and the so-called titans of industry are being seen more as the parasites they are.

But there is also a rising tide of distrust in officials in charge of major and critical institutions like the CDC. For instance, the viral video segment from the upcoming, so-called “documentary” Plandemic revolves around one central figure, the discredited scientist Judy Mikovits, and attempts to weave a complicated tale of conspiracy about Anthony Fauci and other officials with virtually zero evidence to back any of it up. But the blame for most of this public dubiety lies at the doorstep of the establishment itself.

Scores of atrocities have come from the unholy union of the state, corporations and the military. Even though it may not be discussed widely in mainstream circles, there is some public memory of the multitude of crimes committed by powerful state actors and agencies, from the Tuskegee experiments on Black men, to COINTELPRO, to infiltration of the Civil Rights and antiwar movements, to the nuclear tests that contaminated the Marshall Islands and exiled its indigenous population, to the radiation experiments on unsuspecting soldiers and pregnant women, and beyond. These crimes, along with those committed against non-Americans during war, as in Vietnam, Laos, Cambodia, Iraq, Libya, have eroded the public’s confidence in the nation’s established institutions. Indeed, all those incidents have led us to this moment. And Trump has used all of this to his advantage. He continues to distract from his initial denialism and ongoing anemic response to the pandemic by playing on rampant paranoia we are seeing in many places, especially online.

The United States leads the world in cases and deaths from Covid-19 and this is, at least in part, due to a culture of entrenched, willful ignorance where science is concerned. The rampant denial over climate change in an era where there is literally no debate on the subject among the majority of the world’s scientists, is a glaring example of this. But it is also due to a long legacy of brutal betrayals and crimes, and a culture which values the stock portfolios of the wealthy over the health and lives of the working class, people of color, the disabled and the elderly. There is no end in sight for this pandemic thanks to this arrangement. And no coherent or humane plan is in the works to address the enormous human suffering that will result.

Absurdity is a luxury of the powerful, but a misery for everyone else. Under the rubric of capitalism, the ludicrous becomes a tool in fomenting distrust, disenfranchisement, alienation, fear and confusion. It is used to divide and conquer. But because of its corrosive effect, it can only go on for so long before the very fabric of a society disintegrates. We are not there yet, but we should not kid ourselves in thinking we are far from it.

7 thoughts on “A Pandemic and a Plague of Absurdity, by Kenn Orphan”