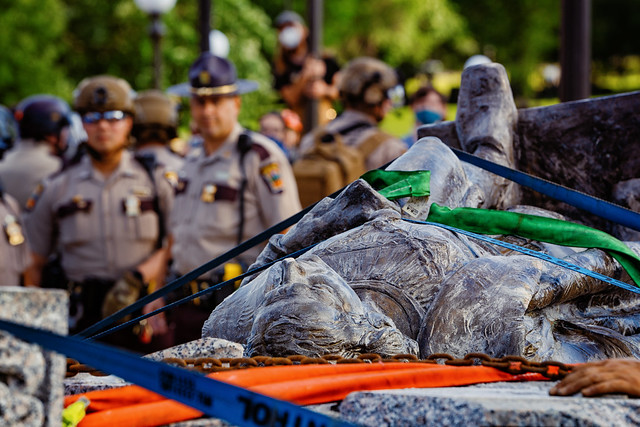 Donald Trump’s indulgence in conspiracy theories is running amok. The latest is his speculation that a 75-year-old man who had his skull split open by police was a “provocateur”.

The man in question, Martin Gugino, was shoved to the ground by police officers after he approached them openly, without threat and in broad daylight during a public protest in Buffalo, New York state. He fell backwards, suffering concussion and spilling blood on the sidewalk. Dozens of police officers in riot gear then walked past his prone body to enforce a curfew.

Two officers have been subsequently charged with assault over the incident.

A follow-up report on the One American News Network, a pro-Trump outlet, claimed that Gugino may have been a supporter of antifascist provocateurs. Trump then amplified that highly speculative report with his Twitter platform.

This time Trump may have gone too far even for Republican lawmakers and senior GOP figures. Several of them deplored the president for “fanning the flames” of violence and “reckless” peddling of conspiracy theories.

There is no evidence that the elderly protester was doing anything other than peacefully exercising his Constitutional right to support the mass demonstrations that have engulfed the US after the killing of African-American man George Floyd by Minneapolis police on 25 May.

Like thousands of other US citizens protesting against police brutality over the past two weeks, Martin Gugino found himself subjected to police brutality. The world has been shocked by images of officers manhandling civilians, driving vehicles into crowds, shooting at journalist crews and sweeping into neighbourhoods like vigilante gangs, yelling at residents to go inside their homes.

Trump has pitched himself as a “law and order president”, calling for the National Guard to back up riot police. He and his supporters have sought to portray largely peaceful protests as being infiltrated by extreme leftwing subversives, referred to as “Antifa”. This is not to deny that such radical activists exist across the US, but Trump’s claims about their presence and influence are grossly exaggerated.

Even US law enforcement organisations have found little evidence of Antifa being responsible for fomenting protests in hundreds of American cities and towns, the vast majority of which have been peaceful and of a wide multiracial composition, simply demanding an end to racist policing.

Trump’s seeking of a scapegoat has been echoed by his Secretary of State Mike Pompeo who has hinted darkly at “outsiders” whipping up protests.

This conspiratorial thinking is aimed at confusing the overdue public debate on US police brutality and militarisation of law and order. By blaming others and inflaming passions and prejudices, the desired effect is to let the system off the hook.

The same blame-game is at play over Trump’s attempts to incriminate China or the World Health Organisation for spreading the coronavirus pandemic.

Like his latest Tweet about a 75-year-old man being a provocateur for getting his head smashed in by police, Trump has accused China without a shred of evidence of releasing the virus from one of its laboratories.

It really is a sign of how extreme Trump has become when Ari Fleischer, the former press secretary of Iraq War president GW Bush, has denounced the current White House Commander-in-Chief as “reckless in trafficking conspiracy theories”.

Earlier this week, Trump’s White House switched the “Antifa” trope by claiming that the mass protests across the US were the work of Venezuelan President Nicolas Maduro.

Trump is showing himself to be completely deranged as well as being a chillingly cynical practitioner of the dark arts. His earlier advice about people drinking household bleach as a cure for Covid-19 also show him to be a dangerous buffoon.

But the truth is that such conspiratorial loony-thinking is embedded in US political culture in a way that cuts across both so-called right and left.

The supposed liberals in the Democrats and their supportive media like the New York Times and CNN may condemn Trump for peddling outlandish speculation and for “pouring gasoline on flames”.

But these same sources have been relentlessly pumping out nonsense about Russian and Chinese interference in US politics, setting up geopolitical conflicts that pander to American imperialism and its military industrial complex.

For decades, it is a staple of US politics and establishment media to portray American social problems as the work of outside agitators and foreign enemies. McCarthyism, Red-baiting and so on.

Conspiracy-thinking about phantom bogeymen is the traditional way for US politics to avoid fundamental democratic change because it conceals the inner corruption. It’s just rather apt that’s all that the current president is a conspiracy theorist-in-chief.

People are asking: where does this end? The list of monuments and emblems slated for removal in the US and Europe is a daunting, ever-expanding one.

Some are labelled as glorifying racism, others for venerating war, imperialism and colonialism.

Statues to Christopher Columbus and Confederate leaders in the US have been toppled this week, so too have landmark effigies in Britain, Belgium, and other European countries.

The anger on both sides of the Atlantic has come like a torrent following the racist police killing of African-American man George Floyd in Minneapolis on 25 May.

That anger goes beyond racist policing and now engulfs wider historic issues of slavery and colonialism.

Defenders of the statues remaining in place say the calls for their removal amount to anarchy, comparing it to barbarian acts by the cults like Al Qaeda. They say it can only lead to chaos and obliteration of history itself. Without these statues, even if they are dubious, how can one discuss past epochs of history, it is contended.

These are glib arguments, maybe even disingenuous, put forward in some cases by people who in reality are apologists for the misdeeds attributed to the historic figures.

If some statues have been torn down or defaced recently, it is because popular demands for their removal have been ignored for decades by the authorities, leading to frustrated direct action by citizens. In any case, most people objecting to these symbols have called for the statues to be taken down in an orderly fashion to be placed in a museum where the public can view them in a context of critical history.

As to the question about where does all this end? Well, one can understand the disquiet. The list is truly awesome and encompassing of national icons.

How about US army bases named after Confederate military leaders who are associated with fighting for “the right” to slavery? How about statues to British war time leader Winston Churchill who espoused racist contempt for colonized peoples of the British empire? How about Belgian King Leopold II who oversaw genocidal slavery in Africa at the end of the 19th century. Many more figures central to Western “heritage” could be cited.

Hundreds, perhaps thousands, of landmarks, statues, bases, street names, colleges, hospitals and other public buildings could be renamed or replaced throughout the US and European countries owing to their association with historic crimes of slavery, colonialism and imperialism.

This is not a wrecking crusade against supposed Western culture. It is a reckoning with the systematic crimes of these nations whose vile legacy prevails until today. From racist police killing of ethnic minorities, as well as poor working class whites, to endless wars of aggression against foreign nations that are waged with impunity. The pathological policies of Western states are the result of these states never properly being held to account for their crimes, past and present.

To call for a rooting out of despotic public symbols in Western states with histories of slavery and imperialism is not some kind of insipid “cancel culture” or expression of trivial “wokeness”. Writing it off like that is a failure to understand the nefarious depth of accepted depravity-as-normal.

The list of reckoning for Western states is indeed an enormous one. Because of the enormous responsibility for crimes against humanity upon which the wealth of Western states was largely created and is sustained by. It is an integral part of the capitalist system that exploits human beings for private profit, which necessitates oppression and war.

If such a reckoning seems daunting, that’s because it is. But it doesn’t mean that it should be ignored or demeaned. Until Western states are held to fully account for their complicity in genocidal slavery, wars and colonialism, then there will never be justice or peace. Either at home or abroad.

Without genuine accountability, which reflects genuine consciousness of horrors and why and how the horrors were and are perpetrated, the system is allowed to continue in its destructive, murderous ways.