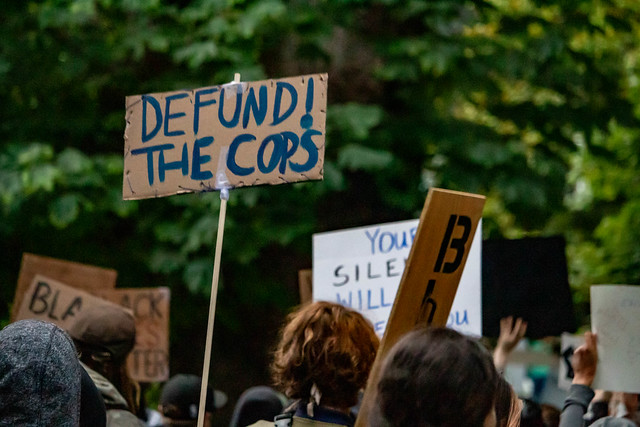 I have never heard it louder than I did this morning.

The Interstate highway, I-80, that is, two miles or so north of my abode in Iowa City.

It’s a highway to Hell in the heartland of the deranged Superpower that leads the world in per-capita Greenhouse Gassing.

All those carbon-spewing, planet-cooking semi-trailers, cars, vans, SUVs, motorcycles, and buses merge into a continuous roar that comes down through the campus town’s treetops like some howling serpent with no discernible head or tail.

It was just six-thirty in the morning. I could already make out the endless howl of engines and tires.

What a shame. For three days and nights last week, marching crowds of angry young adults and teenagers silenced the beast for a few miles after Iowa State and Johnson County Police realized they couldn’t stop Black Lives Matter protesters from monkey-wrenching “the Main Street of America.”

The forces of order mounted a noxious and ignoble defense of the holy white interstate highway system on the night of Wednesday, June 3rd. Flash bombs and tear-gas sent young folks, Black and white, back into town, one (a young Black man) in an ambulance.

But those were bad optics: white middle-class students alongside considerably less privileged Black and African activists being violently dispersed by fascistic riot police just north of “college-town USA.” And so, the next day, the Black mayor of Iowa City could be seen negotiating with a white state police captain for a careful procession onto the Interstate.

It was almost eerie to behold from the Dubuque Avenue bridge above I-80: no traffic heading east or west on either side. The captain acted like he was granting something not previously agreed upon. In reality, however, state police had already set up traffic detours in anticipation of crowds certain to come back for a return engagement. The order had come down earlier in the day: no more ugly battle scenes.

The military-style riot police were no longer guarding the sacred white nationalist highway Thursday night. I saw them earlier in the day, standing grimly outside the Johnson County Court House, where racially disparate prosecutions help Iowa possess the third highest racial disparity in mass incarceration among the nation’s fifty state.

Now it was time to let the liberal class seem to take over for a bit, with elected Black officials in the lead. By virtue of the color of their skin, they possessed an ability the white authorities lacked to calm the anti-racist and anti-police state rebellion.

I did not avail myself of the opportunity to stroll around on I-80 chanting “Say His Name, George Floyd” and “Black Lives Matter.” As I jogged home, I wondered how many of the Interstate’s occupiers joined me in reflecting on the ecological impact of highways and the environmental dimensions of 21st century race-class oppression. If the environmental calamity being created by anthropogenic (capitalogenic) climate change “isn’t going to be averted,” Noam Chomsky rightly told Occupy Boston eight years ago, then “in a generation or two, everything else we’re talking about won’t matter.” The betting windows will close on prospects for a decent and livable future unless humanity moves quickly off fossil fuels and on to renewable energy sources – a technically viable project.

This is “historical materialism” – or just materialism – 101. The “usual” struggles over how the pie is distributed, managed, and controlled and by and for who are going to take on a frightful feel when it becomes apparent that the overcooked pie is infected beyond cure.

Who wants to turn the world upside down only to find that it is riddled with runaway decay?

Who hopes to inherit a dying Earth from the bourgeoisie?

There’s a catch, however. The catastrophe will not be averted under capitalism – the biggest ticket item on the long list of “everything else” leftists have long opposed. As the Canadian Marxist Sam Gindin noted in a review essay reflecting on the progressive environmentalist Naomi Klein’s tendency to focus on “neoliberal” and “free market” capitalism more than on capitalism as such in her important book This Changes Everything: Capitalism vs. The Climate:

“… It is not just that any capitalism is inseparable from the compulsion to indiscriminate growth, but that capitalism’s commodification of labor power and nature drives an individualized consumerism inimical to collective values (consumption is the compensation for what we lose in being commodified and is the incentive to work) and insensitive to the environment (nature is an input, and the full costs of how it is exploited by any corporation are for someone else to worry about)…. A social system based on private ownership of production can’t support the kind of planning that could avert environmental catastrophe. The owners of capital are fragmented and compelled by competition to look after their own interests first, and any serious planning would have to override property rights — an action that would be aggressively resisted.”

As the Marxist philosopher Istvan Meszaros has observed, updating Rosa Luxembourg for the Capitalocene in the 21st century, “it’s [eco] socialism or barbarism if we’re lucky.”

One of the neatest moments I witnessed in the “Say His Name” protests in Iowa City came five nights ago at the downtown intersection of Burlington and Gilbert Streets. The protesters started chanting “Money for [X], not police.” It got pleasantly rhythmic as marchers filled in the “X” with different things: jobs, schools, health care, housing, and more.

Money for housing, not police.

Money for schools, not police.

Money for childcare, not police.

One of the nice things about this poetic moment was that it took protesters briefly off the snare of liberal racial identitarianism (dominant on both sides of the nation’s polarized partisan divide) and on to issues and demands that concern working-class and poor people of all colors, races, and ethnicities in their struggle (conscious or not) with capital.

Another cool aspect of the “money for X, not police” mantra was the beginning grasp it suggested of an important point. Beneath outwardly anti-statist discourse about the conflict between “government” (supposedly bad) and the “free market” (supposedly good), the American corporate and financial ruling class is pleased with state policy of a specifically regressive, plutocratic, and authoritarian — state capitalist and evermore fascistic— sort. It doesn’t want to destroy the state. It wants to de-fund, disable, and de-legitimize what the French sociologist Pierre Bourdieu called “the left hand of the state”— the programs and services won by past popular struggles and social movements for social justice, equality, human need, and the common good.

It does not wish to axe the “right hand of the state” – the parts of government that provide service and welfare to concentrated wealth and dole out punishment (including rampant mass incarceration and felony-marking) for the disproportionately (but far from exclusively) Black and brown poor and oppressed.

It’s not about whether “big government” should work or exist. It’s about who government should work for: the (multi-racial and multi-ethnic cross-gendered) working-class majority or the leading centers of concentrated wealth and power.

The more it shreds the social protection and uplift programs provided by “the left [social and democratic] hand of the state,” the more capital relies on the repressive, fascistic, and police-statist “right hand of the state” to control its lower orders. There is a dialectically inseparable relationship between the slashing of the social welfare state and the rise of the American racist mass incarceration state, itself so extreme that 1 in 3 Black boys (compared to just 1 in 17 white boys) born today can expect to go prison in their lifetime.

I think I started the “money for health care” chant, suggesting it from the margins of the crowd. I also tried, without luck, to get folks going on “money for the environment” (too many syllables), “money for ecology” (same problem) and “money for green jobs” (too strange sounding).

It’s too bad I didn’t succeed in advancing green slogans. There will be no social or racial justice worth having on a dead planet. Universal health care cannot stem the death and disease produced by the never-ending stream of poison the soulless corporate profits system regularly injects into our air, soil, water, lungs, minds, and bloodstreams.

The capital-induced crisis of livable ecology is the leading issue of our or any time. If it is not properly, quickly, comprehensively, and radically addressed, nothing else will matter.

13 thoughts on “There Will Be No Social Or Racial Justice Worth Having On A Dead Planet, by Paul Street”