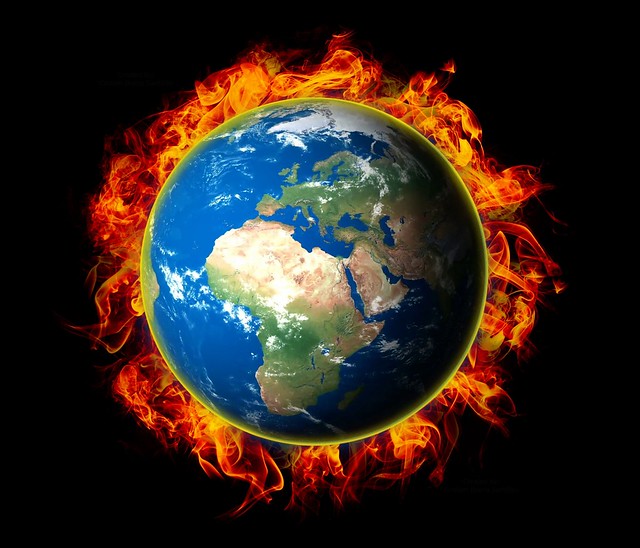 The context here is that the carbon dioxide, methane and other greenhouse gases thrown into the atmosphere don’t magically disappear but will have effects that will persist for centuries. A ton saved today is a ton saved tomorrow.

There are the mass disruptions that humanity will almost certainly see from dramatic rises in sea levels and the disruptions to agricultural patterns and sea life. Then there is the human health impact. In what its authors say is the most detailed attempt yet undertaken to quantify what the future cost of global warming will be in terms of mortality, a new scientific paper predicts the future will see significant increases in deaths.

Sixteen researchers, collaborating on a National Bureau of Economic Research paper titled “Valuing the Global Mortality Consequences of Climate Change Accounting for Adaptation Costs and Benefits,” estimate that under “business as usual” — that is, Earth’s current trend of steadily increasing greenhouse gas emissions continues — there would be 85 extra deaths per 100,000 people annually by the end of the 21st century. To put that statistic in perspective, all the world’s cancers currently are responsible for 125 deaths per 100,000 people, according to World Health Organization data. Or to be put it another way, the 85 extra deaths represent a toll comparable to the global total of deaths from infectious diseases in 2018.

As would be expected, the increased deaths will be disproportionally suffered in the Global South. Although the financial cost of mitigation is predicted to be higher in the advanced capitalist countries than elsewhere, the easing of cold weather in winter months might actually cause death rates to decline in high-latitude, high-income locations. The authors put that possibility in stark terms with this comparison:

“The costs of climate change induced mortality risks are distributed unevenly around the world. Despite the gains from adaptation … there are large increases in mortality risk in the global south. For example, in Accra, Ghana, climate change is predicted to cause damages equivalent to approximately 160 additional deaths per 100,000 annually under [the business as usual scenario] in 2100. In contrast, there are gains in many impact regions in the global north, including in Oslo, Norway, where we predict that the equivalent of approximately 230 lives per 100,000 are saved annually. These changes are equal to an 18% increase in Accra’s annual mortality rate and a 28% decline in Oslo’s.”

And thus their conclusion that “Today’s poor bear a disproportionately high share of the global mortality risks of climate change, as current incomes (as well as current average temperatures) are strongly correlated with future climate change impacts.” In other words, those least responsible for global warming will pay the highest price for it.

To make these predictions, the authors gathered mortality statistics from 41 countries accounting for 55 percent of the world’s population, which they say enables them to have put together a more comprehensive analysis than previously attempted by earlier studies.

It won’t be pretty for our descendants

In a different scenario, under which greenhouse gases are stabilized in coming years, the expected number of excess deaths would be less, although still concentrated in the Global South. Under this scenario, the amount of carbon dioxide equivalent is presumed to stabilize at above 500 parts per million (ppm), and although that is far less than the “business as usual” scenario, it should be remembered that today’s carbon dioxide equivalent content is 407 ppm. And that is with the recent downward blip thanks to the pandemic. To use non-scientific terminology for what would happen in a 500 ppm world, our descendants will be screwed.

To have a hope of keeping the eventual total of global warming from the start of the Industrial Revolution to under 2 degrees Celsius, considered the outside limit before uncontrollable, catastrophic environmental disruptions are triggered, atmospheric greenhouse gases will have to be held to not much more than present-day levels and then brought down.

Without a drastic change, soon, in global output of greenhouse gases — and no such change is anywhere in sight — even the scenario of stabilizing greenhouse gases at 500 ppm seems out of reach. But even if we could suddenly convert to a carbon-neutral economy and cease adding net gains to atmospheric greenhouse gases, it may already be too late. More worrisome still, the effects of global warming are occurring faster than expected.

The Arctic is warming two to three times faster than Earth is overall. The resulting faster than expected loss of land ice contributes to a faster sea level rise and the loss of sea ice adds to global warming in a feedback loop. That’s because a dark ocean surface absorbs solar radiation up to 10 times more readily than the brighter sea ice surface. In a 2019 paper, “Radiative Heating of an Ice-Free Arctic Ocean,” published in Geophysical Research Letters, three oceanographers and atmospheric researchers calculate that if the Arctic Ocean becomes ice-free, the loss of the ice’s reflective power radiating solar energy back into space would be the equivalent to adding one trillion tons of carbon dioxide to the atmosphere. That would be roughly equal to adding 25 years of additional global CO₂emissions.

Although an ice-free Arctic Ocean is still generally predicted to be well into the future, that future might arrive much sooner than expected. Scientists at the British Antarctic Survey, publishing this week in the journal Nature Climate Change, believe it is possible for the Arctic to be ice-free as soon as 2035, a possibility based on study of Arctic sea ice during the last interglacial period, when Arctic land summer temperatures were 4 to 5 degrees C. higher than the pre-industrial baseline. By one measure, current temperatures above 60 degrees north latitude have already risen about 3 degrees C. since 1900.

There’s plenty of bad news to go around

As it is, predictions of what the world will look like are increasingly dire. For example, a 2015 paper by nine scientists led by geologist Andrea Dutton at the University of Florida published in the journal Science found that when global temperatures in the past were between 1 and 2 degrees C. above the pre-industrial base temperature, sea levels rose six to nine meters. What that finding means is that humanity may have already committed itself to an eventual sea level rise of that magnitude.

Need more? A 2016 paper published in Atmospheric Chemistry and Physics, authored by 19 climate scientists from the United States, France, Germany and China and led by James Hansen, predicts that the melted freshwater from melting glaciers will add to the other scenarios to create a feedback loop that could culminate in a sea level rise of “several meters” in 50 to 150 years.

Still another paper, “Explaining Ocean Warming: Causes, Effects and Consequences,” concludes that the mean global ocean temperature will increase by as much as 4 degrees C. by 2100. This 2016 paper states that Earth has tipped into a heat imbalance since 1970, and this excess heating has thus far been greatly ameliorated because the world’s oceans have absorbed 93 percent of the enhanced heating since the 1970s. This accumulated heat is not permanently stored, but can be released back into the atmosphere, potentially providing significant feedback that would accelerate global warming. Dozens of climate scientists from around the world contributed peer-reviewed work to this report, research that in turn is based on more than 500 peer-reviews papers.

There is plenty more, but perhaps the foregoing is sufficient. And so what is the world doing? Very little. The December 2019 meeting of the Conference of the Parties to the United Nations Framework Convention on Climate Change (COP 25) in Madrid concluded with the world’s governments saying the conference “Notes with concern the state of the global climate system” and “Decides to hold, at its twenty-sixth (2020) and twenty-seventh (2021) sessions, round tables among Parties and non-Party stakeholders on pre-2020 implementation and ambition.” The time for “noting” there may be a problem would seem to be well past. A year earlier, at COP24 in Katowice, Poland, the world’s governments agreed to a rulebook with no real enforcement mechanism. And at COP23 in Bonn, participants congratulated themselves for their willingness to talk and agreed they would talk some more.

And so it goes, as Kurt Vonnegut liked to say. We are fortunate that hot air from political leaders doesn’t add to global warming, however weighed down they are by the piles of corporate money that keep “solutions” at the level of talking rather than action. Our descendants are not likely to be amused.

21 thoughts on “Those Least Responsible For Global Warming Will Pay The Highest Price For It, by Pete Dolack”