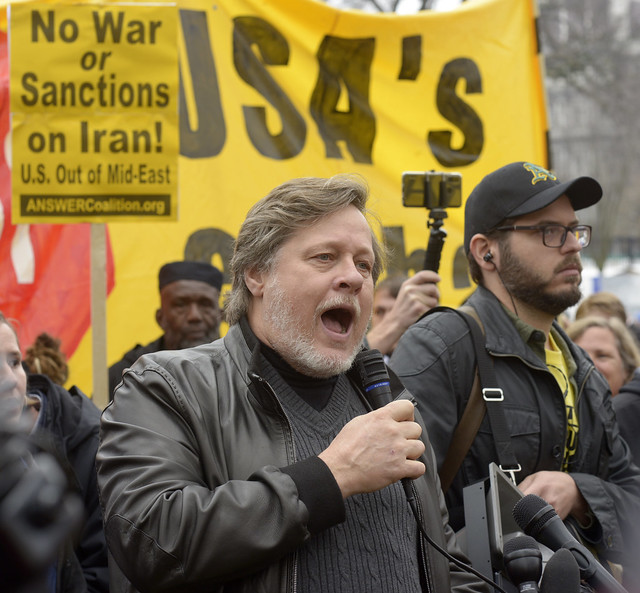 My sincere condolences to Margaret Flowers and Kevin Zeese‘s family and friends. He will be missed by many. ~ Lo

I'm heartbroken. One of the best humans I've ever known – Kevin Zeese @KBZeese – has passed away from a heart attack. He was a powerful force on the front-lines of every fight for justice – poverty, war, healthcare, & more. The movement for peace & love has lost a shining star.

Devastated by the sudden loss of my friend, Kevin Zeese. Kevin was a reassuring guide through turmoil, a militant for peace, the epitome of a stand-up guy. He put his body between the empire and its targets and stood on the frontlines until his last day. pic.twitter.com/LNH9DErcFg

Heartbreaking! Our dear @KBZeese Kevin Zeese passed away suddenly this morning. Kevin was a brilliant writer, organizer, strategist and visionary. Wherever there was injustice, Kevin was there, with his partner Margaret @MFlowers8 and @PopResistance. We miss you, brother. pic.twitter.com/q87cGWHaS5

I am heart broken this morning. I learned that my friend and comrade Kevin Zeese passed away suddenly.
Rest in Power!@KBZeese

The movement just lost a brother in the struggle against war and oppression. @KBZeese was a tireless organizer, strategist and front line activist, standing strong when threatened with right-wing & state violence and jail, along side his partner @MFlowers8. Kevin Zeese Presente! pic.twitter.com/lSzzd3Pyd6

Devastating news that international solidarity and anti-war activist Kevin Zeese has passed away. He was at the frontlines defending the Venezuelan embassy in DC last year and his solidarity with the Bolivarian Revolution was immense. He'll be sorely missed. Rest in power! pic.twitter.com/ERyyYcZdrB

What a tragedy and loss. Kevin, Margaret and others here in our DC area movement formed an organic community of resistance opposing the US illegal, pirate-like seizure of the Venezuelan Embassy. Kevin’s leadership was consistent, steadfast and effective. A big loss for all today https://t.co/cg2nue6eCs

An unspeakable loss to so many on a personal and movement level. Kevin Zeese was a force of nature. His brilliance illuminated how we got here and where we're going. Now we take him there in our hearts. Kevin Zeese presente! La lucha continua! https://t.co/SJKyaAa2k9

We are deeply saddened to announce our former Senate candidate & long-standing Green activist Kevin Zeese unexpectedly passed away early this morning. More information on how we can come together to lift up his legacy to the Green Party will be forthcoming. Kevin Zeese, Presente.

Unspeakably tragic. Kevin Zeese was a clarion voice on the US left who knew how important it is to prioritize anti-imperialism.

Kevin put his body on the line protecting Venezuela's embassy, and dispelled regime-change propaganda at @PopResistance.

He will be sorely missed. RIP https://t.co/R1fyaBCNit

We deeply regret the unexpected departure of our brother Kevin Zeese, courageous Peace and Human Rights activist. One of the US heroes that defended our Embassy until the end. Our condolences to his partner Margaret and all of his family. pic.twitter.com/fLoqFhskPp

U.S. peace activist and organizer, Friend to Venezuela and Latin America, Co-director of @PopResistance and Embassy Protector (among many other things), Kevin Zeese, passed away this morning. The fight lives on. Thank you Kevin for everything. @teleSURenglish pic.twitter.com/A1sXS5OVx6

Kevin Zeese is a genuine example of a committed fighter for a better world. His solidarity was unconditional and his joyful energy was contagious. I learned so much from him.

We’ll carry his memory to all future battles. We love you Kevin. pic.twitter.com/RKp4Xd8mtS

We are sad to announce the passing of our Press Secretary Kevin Zeese last night. ”Kevin leaves an enormous hole in his wake. He would want his legacy to be that we filled it by multiplying our efforts to bring about a better world.” – Howie Hawkinshttps://t.co/34zxo8llxx pic.twitter.com/7JQD9pXFai

@KBZeese remembering Kevin Zeese, who passed away last night. Pics from our trip to #Palestine – Aida refugee camp, in #Jerusalem with Rabbi Hirsch, in the #Naqab with local Palestinian Bedouin. Such a brilliant, caring person, such a sad day. pic.twitter.com/CfGF6vy9kP

We were devastated to learn of the death today of Kevin Zeese, a lifelong fighter for justice & against imperialism. He was an example for us all. We will honor his life by continuing the struggle he was so important a part of—opposing imperialism.

Our movements have had no greater friend and comrade.

Thank you Kevin, we are eternally grateful.

Rest in the greatest of power…
as we continue the struggles. pic.twitter.com/7yT8dEiFsd

“Those in power can kill one, two, or three roses, but they will never be able to stop the coming of spring”
– Lula da Silva

I lost a friend.

All of us lost a prolific, tireless, and principled advocate and activist for peace and justice.