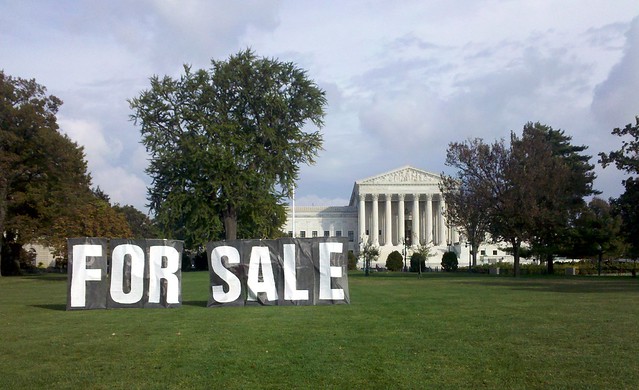 “It would be naive to depend on the Supreme Court to defend the rights of poor people, women, people of color, dissenters of all kinds. Those rights only come alive when citizens organize, protest, demonstrate, strike, boycott, rebel, and violate the law in order to uphold justice.” — Howard Zinn

The history of most ancient civilizations is one of caste and the ritualized enforcement of hierarchy. Subjects of these societies were conditioned to venerate a priestly class. Those ordained and ceremonially clad minsters of temple law who were untouchable figures endowed with enormous power over the day to day lives of ordinary people. Their primary role was protecting the interests of the ruling class through the dispensing of restrictions or rights on the laboring classes.

In many ways, the Supreme Court of the United States is an archetype of that priestly class. They are selected by the president, essentially the modern-day emperor and, once ensconced in this class of black robbed figures, they are there for life. As a hegemonic institution, they are the final authority on the issues of importance to ordinary people. That is, of course, the ones they take an interest in. But most of their work is in corporate and banking law because the transactions of the wealthy and powerful have always outweighed that of the lower classes in any empire.

It is only through the lens of empire that the hierarchy of caste becomes clear. And once it is illuminated, the fog of blind deference to the powerful is lifted. Indeed, we can see how these institutions have been constructed and designed to perpetuate a caste system. What else could explain the highest court in a republic that claims “all men are created equal” making a decision to deny citizenship to African slaves, only to later grant personhood to corporations?

Under late neoliberal capitalism, its most barbaric phase, the Supreme Court, or priestly class, has become one of the last refuges for the ruling class to hide in. But as the American Empire crumbles, this refuge is more and more resembling a fortress against the rightful anger of the masses, than a sanctuary for wealthy oligarchs. And it may be that the days of this refuge are numbered.

Ruth Bader Ginsburg was a more liberal voice of America’s priestly class known as the Supreme Court. Her defense of feminism and LGBTQ people are to be commended. But she, like her colleagues, dwelled in ivory towers far from the lived lives of the millions who reside under the oppressive weight of the American Empire’s hubris. It is why she had difficulty understanding protests against racist policing in the country. It is also why she denied Native American’s their sovereignty in one infamous case against the Oneida Nation, who attempted to buy back land that was stolen from them by the white colonial settler state. Ginsburg did express some regret for her remarks about Colin Kaepernick and the Oneida decision, but both instances signaled an underlying disconnect from these lived realities of caste and dispossession.

While Ginsburg’s death comes at one of the most tense moments in the recent history of the American Empire, it must be reiterated that the Supreme Court is not the true arbiter of change or a defender of the marginalized or disenfranchised in American society. It never was. There is a long succession of SCOTUS decisions to attest to the fact that it is an institution designed to protect the interests of the ruling class. In today’s context, this means corporations, banking and the US government, especially its surveillance and military wings.

Empire’s of the past relied on a priestly class to hold the angst and rage of its subjects at bay. They possessed all the ritualized accessories of authority, but they did not oppose the empire itself because they could not. The Supreme Court of the United States is no different in this regard. It carries out the will of the ruling class because it cannot do otherwise. And as we witness the American Empire begin to crumble under the weight of its own excesses and the avarice and cruelty of its ruling class, we should remind ourselves of this truth.

Donald Trump, the emperor without clothes extraordinaire, will now attempt to appoint one of the most fascist leaning justices the US has ever seen. He will delve into his cadre of ghouls of which there are many. And if history is a guide, he will likely succeed. But justice has never emanated from the powerful. Nor has it ever been dispensed by the priestly class employed to defend an empire’s caste system. It has always come from the din of the street. From those residents of the precincts of poverty and marginalization who have organized in solidarity, who have raised their voices in defiance, and who have put their bodies on the line to halt the engine of brutality. And now, more than ever before, we need redeem this urgent lesson from history.