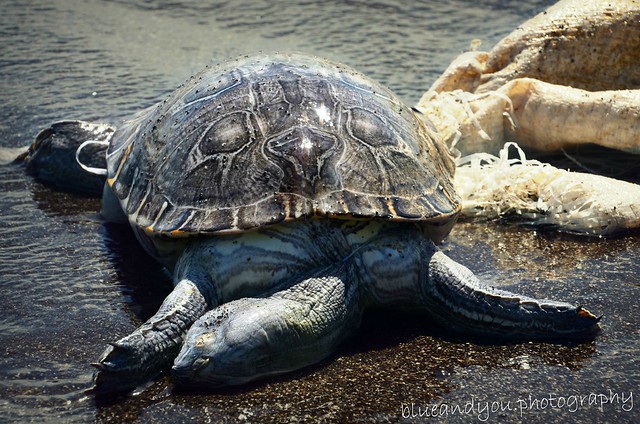 This one creature represented hundreds of millions or more, and species of all kinds. All impacted by the byproducts of our modern consumer capitalist world. It was a surreal sight only later matched in intensity and horror when watching a video of the dissection of a deceased whale whose belly was bursting with tons of plastic bags and other hard synthetic polymers, or the sight of a deformed tortoise whose shell was strangulated throughout its life by a plastic beverage holder.

This month another set of photographs highlighted the global crime and catastrophe of ecocide. It was by Sri Lankan photographer Tilaxan Tharmapalan, and it won the UK’s Royal Society of Biology photography competition. Tharmapalan captured images of a wild herd of elephants scavenging for food in a rancid landfill near a wildlife sanctuary. Many of the elephants have become ill or died as a result of feeding on plastic and other toxic waste. But it is the ubiquitous nature of plastic, the myth of recycling, and the normalization of its presence in our lives that I wanted to discuss in this essay.

Images like this make the greenwashing efforts by the plastic industry and Big Oil fall flat. In fact, they have been a lie from the start. It was the plastic industry that started the idea of “recycling.” But this was not intended to reduce the production of plastic. On the contrary, it was intended to give a veneer of “corporate responsibility,” while they ramped up plastic manufacturing. Over the decades recycling became the mantra of many “environmental” organizations. But the myth of recycling remains largely obscured. In every recycled plastic product there is an equal measure of new plastic, so there is no real reduction. It is the exact opposite.

Single use beverage containers have only increased, with only a fraction of the plastic packaging produced ever recycled. Most, over 90% in fact, wind up in landfills like the one in Sri Lanka, or on the side of roads where lazy and self-centered motorists dispatch them in haste from their car windows every single day, or in riverways that run to the ocean and wind up churning into a great toxic gyre in the centre. Today, there are more types of plastic than ever before. Most are unrecyclable, although they will be imprinted with a number on the bottom to add to the illusion of their future incarnation for use.

Plastic has become integrated into every aspect of modern life, from medicine to food to furniture to clothing to machinery. Bathed in it from the delivery room of a hospital till the morgue, there is virtually no place in modern life that it cannot be found. And with it has come an incredible curse. All around the planet plastic waste has become a problem of monumental proportions, and most especially in the global south. But westerners need to halt themselves from distancing or heaping condemnation on the global south for this problem.

Sri Lanka, where the award winning photo was taken, like so many other countries under the heel of the IMF and World Bank, are not the ones profiting from the plastic industry. The profiteers are multibillionaire companies like Dow Chemical, Hanwool Corporation, BASF, Lyondellbasell, Ihne & Tesch GmbH, Exxonmobil, Matsui Technologies India Ltd., and SABIC. And billionaires like Stewart and Lynda Resnick of The Wonderful Company or William Young of Plastipak or Warren Buffett. And as the demand for plastic continues to surge, their net worth has only grown larger.

In addition to this, it is the west, or global north, that has been shipping the bulk of its unrecyclable or “undesirable” plastic refuse to the global south. So the trash in these landfills that are fouling estuaries, deltas and wildlife sanctuaries around the world are from those of us in so-called “developed countries.” Some of these nations have pushed back against these acts of environmental colonialism, but they are in an uphill battle with some of the most powerful and wealthy corporations ever known.

The elephants in that landfill in Sri Lanka are no different than the seabirds, or the whales, or the sea turtles we have watched succumb to humanity’s insoluble and indigestible jetsam and refuse. In fact, they are all harbingers. Portents of what lies ahead for all of us. Whether we like it or not, we are all denizens of a plastic coated world. One that has made enormous profit from the overproduction of plastic for a few and incurred incalculable expense for us all. Plastic can now be found in virtually every corner of the planet, from the Arctic to the Pyrenees to the Marianas Trench. It has even been found in the cells of organisms and in every human tissue. And all of this has come about thanks to the political and economic arrangement of late capitalism, an arrangement that does not possess the capacity for ethical and moral direction in regard to a living planet.

The thin and fragile ribbon we call the biosphere is the only place that we know life exists for sure, and in its great abundance. And it has been relentlessly assaulted through rapacious mining, deforestation and the extraction of fossil fuels by a ruling and wealthy global elite. The byproducts of the latter being climate change fueling CO2, oil spills that ravage coral reefs, and plastic pollution. As for the latter, we will never fully grasp the carnage wrought upon countless species by plastic refuse, on the lands and in the seas we deceptively call the “wild.” We can only fight to protect what remains, even if it has all been tainted by the mad dissemination of synthetic polymers.

4 thoughts on “A Plastic Coated World, by Kenn Orphan”