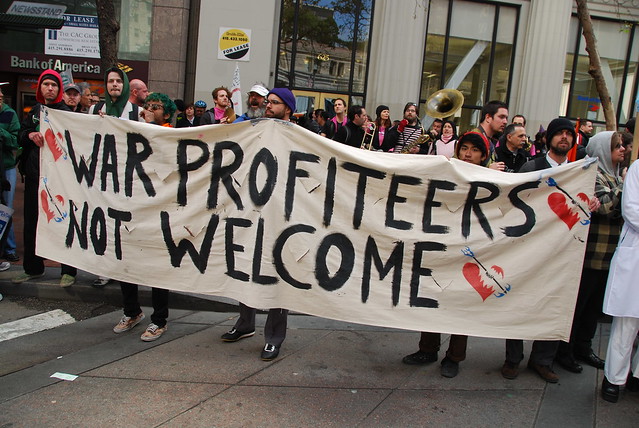 Take a gander, if you can stomach it, at buildbackbetter.gov.

Now, be honest, if this were the work of a Republican would you be ready to protest?

Not only did you not vote for anything new, as the vast majority of the nominees and the policy proposals are long-established moss-gathering Washingtonians, but the new additions here and there are the worst of the bunch.

This is a president-elect openly nominating a group of revolving door war profiteers with shameless but secretive schemes for profiting from mass killing.

There’s not a single nominee for anything who’s taken a stand for disarmament, peace, a green new deal, Medicare for all, or a serious shift to progressive taxation.

Amidst all the hyped diversity, there’s not a single nominee for anything who’s opposed the waging of wars on nations full of men, women, and children with a little bit darker skin tone.

There’s also not a single nominee who would stand for being called “progressive” unless there was a paycheck in it.

There’s a nominee for Secretary of State who wanted to chop Iraq up into three separate puppet states, thinks the U.S. should get more serious about belligerence toward Russia, and wants us to be clear that by “ending wars” nobody means ending, you know, wars.

The rumored nominee not yet added for Secretary of “Defense” is itching for war with China.

The nominee for director of the Office of Management and Budget proposed attacking Libya to steal its oil — but in a very feminist way.

The rumored nominee for CIA is a torturer.

The nominee for special envoy on climate is not anyone with any particular knowledge of climate, but someone with years of experience digging the hole we’re in: John Kerry.

The nominee for director of national “intelligence” helped multiply the drone murders 10-fold.

The nominee for National Security Advisor has pushed war making in Libya and Syria.

The rumored nominee for Housing and Human Services has just presided over one of the world’s worst COVID outbreaks, during which she approved huge health insurance premium increases and gave nursing home corporations legal immunity.

The buildbackbetter.gov website doesn’t just list nominees, but also policy proposals. Here, of course, foreign policy disappears again. Poof! There’s no mention of the federal budget, how much should go where, what wars or bases or treaties or weapons customers or weapons purchases should be handled how. Nothing.

Instead, there’s a pile of vague campaign platitudes about climate. There’s a long list of nice sounding commitments on race, such as “Support second chances for economic success.” A few of them are more concrete and useful, such as “Stopping the transfer of weapons of war to police forces.” What about ending mass incarceration? What about ending the death penalty? What about ending student debt, creating Medicare for All, making college part of public education, taxing billionaires, converting to peaceful industries, expanding Social Security, creating a Green New Deal? What about the good old Employee Free Choice Act? What about a living wage? There’s an economic plan with no mention of any of this. There’s a COVID plan that amounts to a half-assed duplication of what other nations have been doing for months — so of course it seems good by U.S. standards.

This is the problem: lowered standards. But for all the talk of “believing science” there’s little recognition in U.S. politics that climate collapse, nuclear danger, environmental destruction, and war proliferation don’t grade on a curve. Disasters destroy whether or not you can imagine something even worse, whether or not you can imagine a more offensive presentation.

Seriously, how is it that this buffoonish crowd of grifters and recycled corporate platforms is not generating massive protests?

Top 12 Reasons Biden Is Not My Fault, by David Swanson

20 thoughts on “Biden’s Actions So Far Would Have Ye Olde Resistance in the Streets If He Were Republican, by David Swanson”