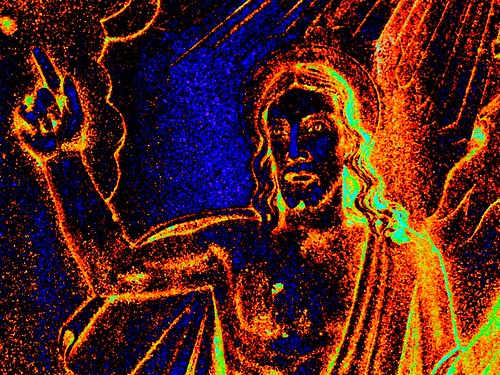 Hedges: “…I think, [the] fundamental message of the Gospel is anti-capitalist, anti-imperialist. Remember when Jesus is taken to the desert by Satan and Satan offers him not only riches, but control of land, which is empire? And that is a condemnation. The Gospels are such a clear condemnation not just of the Roman Empire, but of empire.”

Bullock: “But the other layer of this is that it’s easier to speak truth to the powerless. And so I would maybe disagree and say that those who are left behind have not been written off. They have been anointed to the status of whipping boy and whipping girl. And so the holiness message, right, is a weekly opportunity to speak truth to the powerless which purges the preacher’s impulse to speak truth to somebody. And so every week the preacher is then free from the guilt of having not whooped somebody. Jesus whipped the money changers. Preachers whip their members.

“And so there’s an interesting dynamic in the black church, where many ministers will say things to their members–don’t steal–but they won’t say “don’t steal” to Wall Street. Right? But if stealing is wrong for Leroy, right, then stealing ought to be wrong for the corporate banker. But you don’t get that connection.

Hedges: We have to, as the consumers that we have conditioned, been conditioned to be, recognize that all of these things have to be brought before the manger holding the baby Jesus and abandoned if we’re going to recapture what that gospel message is about.

Bullock: I would simply say there’s a song that says must Jesus bear the cross alone and all the world go free; know there is a cross for everyone and there is a cross from me. So if the baby was born to bear a cross, then let us not just admire him, but let us follow him.”

And when we give each other Christmas gifts in His name, let us remember that He has given us the sun and the moon and the stars, and the earth with its forests and mountains and oceans—and all that lives and move upon them. He has given us all green things and everything that blossoms and bears fruit and all that we quarrel about and all that we have misused—and to save us from our foolishness, from all our sins, He came down to earth and gave us Himself.

Jesus’s Manifesto: The Sermon on the Plain by Roman A. Montero

Christmas 1914: When Rank and File Imposed Truce During Imperialist War by Henry Hagins + Balls to War

Lewis Logan: Jesus was an anti-imperialist