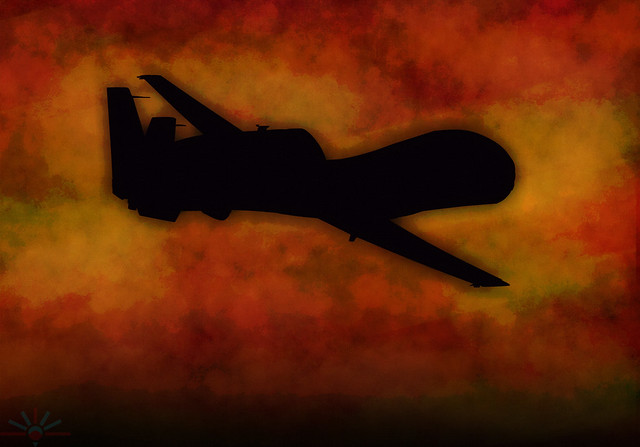 If I search on Google for the words “drones” and “morality” most of the results are from 2012 through 2016. If I search for “drones” and “ethics” I get a bunch of articles from 2017 to 2020. Reading the various websites confirms the obvious hypothesis that (as a rule, with plenty of exceptions) “morality” is what people mention when an evil practice is still shocking and objectionable, whereas “ethics” is what they use when talking about a normal, inevitable part of life that has to be tweaked into the very most proper shape.

I’m old enough to remember when drone murders were shocking. Heck, I even recall a few people calling them murders. Of course, there were always those who objected based on the political party of the U.S. president at the moment. There were always those who believed that blowing up human beings with missiles would be OK if the Air Force would just put a damn pilot in the plane. From pretty early on there were those ready to accept drone murders but draw the line at drones that would fire the missiles without some young recruit in a trailer in Nevada being ordered to push a button. And of course there were immediately millions of fans of drone wars “because with drone wars nobody gets hurt.” But there was also shock and outrage.

Some were disturbed who learned that most of the targets of “precision drone strikes” were unknown human beings, and that even more just had the bad luck to be nearby those unknown human beings at the wrong time, while other victims had tried to help the wounded and gotten themselves blown up in the second tap of a “double-tap.” Some of those who learned that drone murderers had referred to their victims as “bug splat” were disgusted. Those who discovered that among the known targets were children and people who could easily have been arrested, and those who noticed that all the talk of law enforcement was utter nonsense as not a single victim had been convicted or sentenced and virtually none had been indicted, raised concerns. Others were bothered by the trauma suffered by those participating in the drone murders.

Even lawyers eager to ignore the illegality of war were known, back in the day, to declare drone murders to be, in fact, murders whenever not part of war — war constituting the sacred cleansing agent that transforms even murder into something noble. Even hyper-militarists whistling the Star-Spangled Banner out of every orifice were heard, back in the day, worrying about what would happen when profiteers armed the world with similar drones, so that it wasn’t just the United States (and Israel) droning people.

And there was real shock and outrage over the actual immorality of murdering people. The small scale of drone murders even seemed to open some eyes to the horror of the larger scale of the wars of which the drone murders were a part. That shock value seems to have dramatically diminished.

I mean in the United States. In the lands targeted, the outrage is only growing. Those living under the unremitting trauma of endlessly buzzing drones threatening instant annihilation at any moment have not come to accept it. When the United States murdered an Iranian general, Iranians screamed “murder!” But that brief re-entry of drone murders into the U.S. corporate information system gave many people the wrong impression, namely that missiles tend to target particular individuals who can be designated as enemies, who are adult and male, who wear uniforms. None of that is true.

Bush did it. Obama did it on a larger scale. Trump did it on an even larger scale. The trend knows not partisanship, but the well-divided-and-conquered U.S. public knows little else. Both parties’ suckers — er, members — have reason not to oppose what their past leaders have done. But there are still those among us who want to ban weaponized drones.

Obama moved Bush’s wars from land to air. Trump continued that trend. Biden seems inclined to advance the same trend even further. But a few things might build public opposition.

First, police and border patrol members and prison guards and every uniformed sadist in the Fatherland wants armed drones and wants to use them, and will before long create a horrific tragedy in a Place That Matters in U.S. media. We must do everything we can to avoid this, but if it happens, it may wake people up to what is being inflicted on others in all the countries that aren’t the indispensable country.

Second, the confirmation-or-rejection hearings for Avril Haines as Director of National “Intelligence” may be brought to focus on her role in justifying lawless drone murders. We must do everything we can to make that happen.

Vijay Prashad: The Democratic Party and the War Machine

I agree with the Chairman of the Joint Chiefs of Staff on Foreign Bases, by David Swanson

America’s Lawless Arrogance Has Gone Too Far with the Assassination of Iran’s Top Military Commander, by Finian Cunningham+ Why Did the U.S. Attack Iran? by Bruce Gagnon

6 thoughts on “Drone Murder Has Been Normalized, by David Swanson”