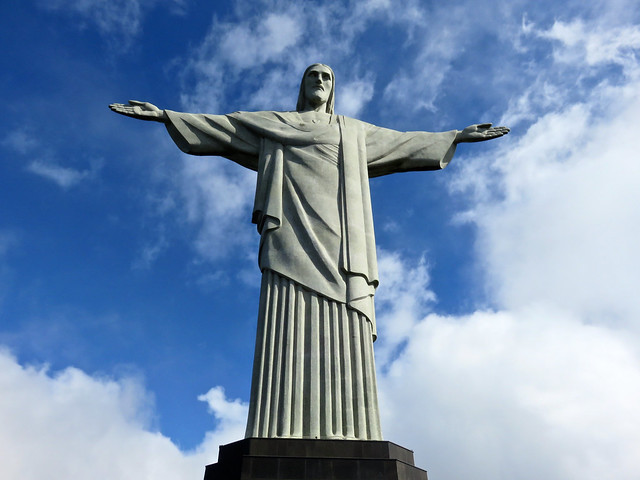 The USA is a very religious nation, in this sense: Most of its people hold self-destructive values about society, politics, and economics that they are reluctant to question, because they believe that “faith” should outrank reason. Most of these people call themselves “Christians,” i.e., followers of Jesus Christ, but these basic values of theirs are just the opposite of the wise things that Jesus actually said. I am writing this essay in the hope of getting at least a few of these self-described “Christians” to reconsider.

I’ll start with an example that is quick and easy. Most self-described “Christians” believe that it’s important to go to church regularly to worship Jesus, because the bureaucrats of the church have said so, but Jesus himself said just the opposite:

Matthew 6:5-6 “And when you pray, do not be like the hypocrites, for they love to pray standing in the synagogues and on the street corners to be seen by others. Truly I tell you, they have received their reward in full. But when you pray, go into your room, close the door and pray to your Father, who is unseen. Then your Father, who sees what is done in secret, will reward you.”

But I don’t consider that issue to be of great importance. What is important?

Theologians have long debated whether

is more important. Here in the USA, faith seems to have won out. People believe that it’s enough to just call themselves “Christian” and they’re done. It’s like sitting in the bleachers to watch a football game, rooting for one team, wearing a sweatshirt that proclaims your allegiance to that team. You don’t need to actually get down there on the playing field and participate. One self-described “Christian” told me, “we don’t have to do all that stuff, because Jesus already did it for us.”

Personally, I’d disagree with that fellow. I’m inclined to agree with James, who advocated works. You can only manifest your faith through your works. Faith without works is an empty and cheap sort of faith. Allegiance and a sweatshirt won’t get you onto Team Jesus; religion is not a spectator sport. Look at what Jesus himself said to Peter and Andrew:

Matthew 4:19 “And he saith unto them, Come ye after me, and I will make you fishers of men.”

Besides recruitment, what is important? Jesus himself answered that:

Mark 12:28-31 “One of the teachers of the law came and heard them debating. Noticing that Jesus had given them a good answer, he asked him, “Of all the commandments, which is the most important?”

Now, how do we carry out these commandments? How do we love God and our neighbor? Again, in my opinion it’s not enough just to feel love inside your head and heart. That’s like faith without works – that’s cheap and empty; I think God wants more. We need to DO something. The road to hell is paved with good intentions. (No, that last aphorism is not in the Bible, but I still think it’s pretty good.)

And what works should you carry out, to manifest your love? Some people build giant statues. Here’s a picture of the statue in Rio De Janeiro, Brazil. It cost a quarter of a million dollars to build in the 1920s; that’s 3.6 million dollars in today’s money. It’s like the Team Jesus sweatshirt, but bigger. I can think of better ways to spend that money.

In my own opinion, those two commandments were really one: The best way to show your love for God is by loving your neighbor. That view is reinforced by Paul’s interpretation:

Galatians 5:14 “For the whole law is fulfilled in one word: ‘You shall love your neighbor as yourself.‘”

And how can you love your neighbor? Jesus answered that pretty clearly:

Matthew 25:34-40 “Then the King will say to those on his right, ‘Come, you who are blessed by my Father; take your inheritance, the kingdom prepared for you since the creation of the world. For I was hungry and you gave me something to eat; I was thirsty and you gave me something to drink; I was a stranger and you took me in; I was naked and you clothed me; I was sick and you took care of me; I was in prison and you visited me.’

“And the King will answer them, ‘Truly I tell you, whatever you did for one of the least of these brothers and sisters of mine, you did for me.’”

Note the use of the word “stranger” in Matthew 25:35. Jesus was not suggesting that you should only help people who you know well. And modern technology has made the whole world into one neighborhood; we are all neighbors now.

But the USA hasn’t behaved as a “Christian nation.” Today, in the wealthiest country in the history of the world, are many, many people who are poor, homeless, and hungry. You can find one begging on every major street corner.

Meanwhile, the rich tell us to trust the market, which they claim is wise. In essence, our present system is worship of the market. But Jesus advised against that:

Matthew 6:24 “No one can serve two masters. Either you will hate the one and love the other, or you will be devoted to the one and despise the other. You cannot serve both God and money.”

The market is not wise – it has actually increased economic inequality. And the rich believe themselves to be wise, too, but Jesus told us otherwise:

Matthew 19:24 “Again I tell you, it is easier for a camel to go through the eye of a needle than for someone who is rich to enter the kingdom of God.”

What can we do for the poor and needy? It’s not enough just to alleviate their suffering momentarily. If we really love them, we ought to change their lives so that they don’t need to beg ever again, so that their lives are as good as ours. But you can’t simply take home with you every beggar you meet. That’s too big a burden for you to carry alone. We have to do it together, systematically. We need to restructure our entire economic system, so it is not based on markets. Here I will quote not Jesus, but Martin Luther King Jr:

“True compassion is more than flinging a coin to a beggar. It comes to see that an edifice which produces beggars needs restructuring.”

How should we restructure our economic system? Well, look at how the early followers of Jesus behaved:

Acts 2:44-45 “All the believers were together and had everything in common. They sold property and possessions to give to anyone who had need.”

Acts 4:32-35 “All the believers were one in heart and mind. No one claimed that any of their possessions was their own, but they shared everything they had. With great power the apostles continued to testify to the resurrection of the Lord Jesus. And God’s grace was so powerfully at work in them all that there were no needy persons among them. For from time to time those who owned land or houses sold them, brought the money from the sales and put it at the apostles’ feet, and it was distributed to anyone who had need.”

Acts 11:29 “The disciples, as each one was able, decided to provide help for the brothers and sisters living in Judea.”

These passages from Acts no doubt formed the inspiration for the communist slogan that was later popularized by Karl Marx:

And there is another reason, a more selfish reason, for us to become unselfish. Modern technology has made us all interdependent. Pandemic, the threat of nuclear war, the ongoing collapse of the ecosystem, or even just a local madman shooting up the shopping mall, all tie our fates together: If your neighbor suffers, then you may suffer too. To treat your neighbor kindly is no longer just love – now it is also self-preservation. Indeed, I’ve written this essay in hope of my own self-preservation.

Please, let us all be kind to each other.

Eric Schechter’s “political awakening,” as he calls it, began in 2006, shortly before he retired from mathematics. His last mathematical work was a book comparing different mathematical logics. He says this may have helped him appreciate the linguist Lakoff’s book Moral Politics, which compares different political logics. But he has subsequently moved far to the left of liberal Lakoff. Schechter would describe himself as anarcho-communist, to the few people who know what those terms really mean; to others he just says “share and don’t hit” following Robert Fulghum. Schechter writes essays, some of which he turns into leaflets and/or videos. In addition to his own blog, some of his political works have been published in Dandelion Salad and/or the Greanville Post. When there isn’t a pandemic, he attends rallies and occasionally meetings. At rallies, he usually has the most radical placard, and he’s handing out leaflets more radical than the rally’s organizers had in mind.

3 thoughts on “US Christianity VS Jesus, by Eric Schechter”