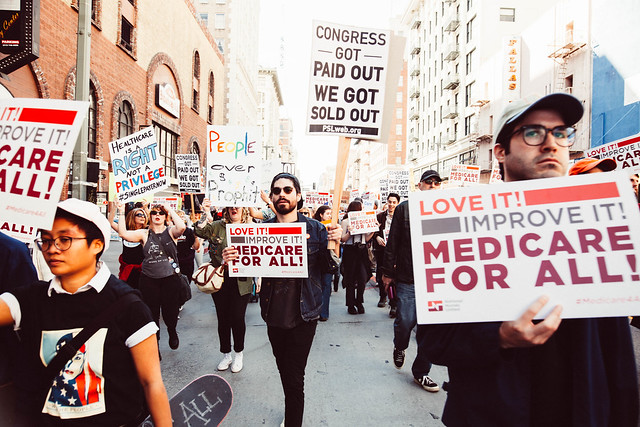 Do you remember the promises made by the Democratic Party’s presidential and Congressional candidates on universal health insurance? You can forget their pledges and somber convictions now that your votes put the Democrats in charge of the House and the Senate. The Democrats’ leaders are abandoning their promises and retreating into a cowardly corporatist future.

Here is the present scene. Leading Democrats, House Speaker Nancy Pelosi and Senate Majority Leader Chuck Schumer, have decided to spend tens of billions of taxpayer dollars to subsidize the giant health insurance companies like Aetna and United Healthcare to “cover recently laid-off workers and those who purchase their own coverage,” as The New York Times reported. There are no price restraints on the gouging insurance premiums or loophole-ridden policies. That is why giant corporate socialist insurers love the “American Rescue Plan,” which gives them socialist cash on the barrelhead. The law lets insurers decide how and whether they pay healthcare bills with co-pays, deductibles, or grant waivers. All these anti-consumer details are buried in the endless and inscrutable fine print.

Whatever happened to the Democrats’ (Bernie Sanders, Elizabeth Warren, Pramila Jayapal, etc.) demand for single-payer – everybody in, nobody out – with free choice of doctors and hospitals instead of the existing cruel, and profiteering industry for which enough is never enough? Senator Sanders often mentioned a Yale study, published on February 15, 2020, that found:

“Although health care expenditure per capita is higher in the USA than in any other country, more than 37 million Americans do not have health insurance, and 41 million more have inadequate access to care. Efforts are ongoing to repeal the Affordable Care Act which would exacerbate health-care inequities. By contrast, a universal system, such as that proposed in the Medicare for All Act, has the potential to transform the availability and efficiency of American health-care services. Taking into account both the costs of coverage expansion and the savings that would be achieved through the Medicare for All Act, we calculate that a single-payer, universal health-care system is likely to lead to a 13% savings in national health-care expenditure, equivalent to more than $450 billion annually….” (See the study: Improving the Prognosis of Health Care in the USA, February 15, 2020).”

Well, House Speaker Pelosi is discouraging House Democrats from supporting Representative Pramila Jayapal’s H.R. 1384, the present gold standard for single-payer. News reports indicate that Representative Jayapal (D-WA) and Representative. Debbie Dingell (D-MI) will reintroduce their Medicare for All bill next week. Speaker Pelosi is telling Democrats in the House to focus instead on the modest expansion of Obamacare with its corporate welfare, utter complexity and seriously inadequate coverage. Almost eighty million Americans are presently uninsured or underinsured – a level that will not be significantly reduced for deprived workers by tweaking Obamacare during the Covid-19 pandemic.

A modified Obamacare, with no price ceilings, will hardly reduce the tens of thousands of American deaths every year because people cannot afford health insurance to get diagnosed and treated in time to prevent fatalities. The Yale study also found that: “ensuring health-care access for all Americans would save more than 68,000 lives and 1.73 million life-years every year compared with the status quo.” Tweaking Obamacare does little to stem the relentless surge in healthcare prices and profits in our country, which is unique for not placing billing ceilings on medical procedures and drugs. This “get whatever you can” behavior by the vendors is so uncontrolled that healthcare billing fraud and abuse is costing people one billion dollars A DAY! Malcolm Sparrow, who is an applied mathematician at Harvard, estimates medical billing fraud amounts to at least ten percent of all healthcare expenses each year.

Obamacare does nothing to limit the perverse incentives of a fee-for-service system that includes unnecessary operations, over-diagnosis, and over-prescribing all of which increase the risks of preventable casualties. A Johns Hopkins University School of Medicine peer-reviewed study in 2016 estimates that close to 5000 lives are lost weekly due to such “preventable problems” just in hospitals (see: Study Suggests Medical Errors Now Third Leading Cause of Death in the U.S., May 3, 2016).

It gets worse. Year after year, the corporate Democrats, along with the Republicans, are facilitating expanding corporate takeovers of Medicare and Medicaid. The giant and widening attack on Medicare is called “Medicare Advantage,” which more accurately should be called “Medicare [Dis]advantage.” Our corporatized government, under both Parties, has been allowing deceptive promotional seductions of elderly people to take Medicare [Dis]advantage – now fully 40% of all Medicare beneficiaries – which is just a corporate insurance plan with multiple undisclosed tripwires.

Former President Trump worsened what he inherited from the Democrats in outsourcing Medicare. He launched something called “direct contracting” that, “could fully turn Medicare over to private health insurers” declared Diane Archer, former chair of Consumer Reports, in her article on March 8, 2021. Medicare Advantage premiums can be pricey. According to Kay Tillow, Executive Director of the Nurses Professional Organization, “The Medicare Advantage Plans are smiling all the way to the bank. In 2019 each Medicare Advantage beneficiary cost taxpayers $11,822 while those in original Medicare cost $10,813 each – that’s over $1,000 more and over 9% more per person for the for-profit insurers!”

Where is the outcry among Democratic politicians to reverse completely the corporate takeover of Medicare? Last year, many Democratic candidates pontificated about the need for single-payer health insurance, but now in Congress, we are scarcely hearing a peep about this vital human right. Their campaign rhetoric is just a distant memory. Tragically, it is now harder than ever for the elderly to get out of Medicare [Dis]advantage and go back to traditional Medicare.

Millions of elderly people are deceived by televised marketing lies and slick brochures. The hapless Federal Trade Commission (FTC) should investigate and end the deceptions. Congressional investigations and hearings are long overdue. As the authoritative Dr. Fred Hyde says about the so-called Medicare Advantage: “It’s not what you pay, it’s what you get.” That is, the corporate health plan works until they get sick, until “they want their doctor and their hospital.” Dr. Hyde was referring to the narrow networks where these companies park their beneficiaries.

More astonishing in this story of the rapacious corporate takeover of Medicare is that AARP promotes these flawed plans to their members, takes paid ads by big insurers in AARP publications, and derives income from this collaboration.

Imagine, over 50,000 SEIU retirees are automatically placed by their unions in these Medicare [Dis]advantage traps without first being allowed to choose traditional Medicare.

This whole sordid sabotage of the nineteen sixties Democrats’ dream, under President Lyndon Johnson, of taking the first step toward universal healthcare coverage for everyone, begs for more exposes. It begs for more clamor by the progressive Democrats in Congress who are strangely passive so far. I’m speaking of Representatives Jayapal, Raskin, Ocasio-Cortez (AOC) and the receding “Squad,” as well as Senators Warren and Sanders. If we can’t expect these stalwarts to start the counterattack that will save lives, save trillions of dollars over the years, focus on prevention not just treatment, and diminish the anxiety, dread, and fear, that the citizens of Canada and other western nations do not experience because they are insured from birth on, who is left to defend the American people against the arrogant health insurance corporate barons?

I’m sending this column to these self-styled progressive Democrats along with a two-page specific critique of corporate Medicare from the Physicians for a National Health Program (PNHP) website. PNHP’s membership counts over 15,000 pro-single-payer physicians. In a comment on the PNHP site, Don McCanne, M.D., says,

“Remember, the mission of private, for-profit Medicare Advantage insurers is to make money, whereas the mission of our traditional Medicare program is to provide health care. We are supporting a program that deferentially caters to the private insurers and their interests when we should be supporting a program that is designed to take care of patients. Those being deceived by the private Medicare Advantage marketing materials really do not realize the bad deal they may be getting until they face the private insurer barriers to needed care. Silver Sneakers won’t take care of that.” (See: https://pnhp.org/news/russell-mokhiber-explains-why-private-medicare-advantage-plans-are-a-bad-deal/)

If you care about this issue, tell your Members of Congress it is time to pass Medicare for All represented by H.R. 1384.

Payroll Taxes Are the Achilles Heel of Social Security, by Jim Kavanagh