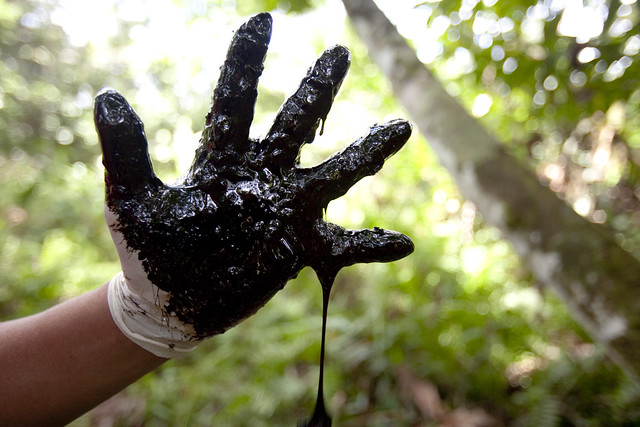 “We must answer their call. Our Mother Earth, militarized, fenced-in, poisoned, a place where basic rights are systematically violated, demands that we take action. Let us build societies that are able to coexist in a dignified way, in a way that protects life. Let us come together and remain hopeful as we defend and care for the blood of the Earth and of its spirits.” – Berta Caceres, Indigenous rights and environmental activist of the Lenca people, murdered in Honduras in 2016

If there is one glaring truth of the 21st century, it is that Indigenous people are at the forefront of a war being waged against the living earth itself. From the Athabasca to the Niger Delta to the Ecuadorian Amazon, the fossil fuel industry, along with other extractive industries, are drenched in the blood of countless innocent people and responsible for ecological annihilation on a scale that is unimaginable. With all of this comes global impunity. These industries enjoy legal protection from the most powerful state entities on earth. Their crimes, of which we are all a victim, go unpunished.

There are few better examples of how the fossil fuel industry operates with impunity than in Chevron-Texaco’s deliberate destruction of the Ecuadorian Amazon, often referred to as the “Amazon Chernobyl” due to the scale of the catastrophe. From 1964 to 1992 Texaco, the company acquired by Chevron with all of its liabilities, polluted a 1700 square mile swath of pristine rainforest. In its lust for profits, the company cut corners and dumped at least 19 billion gallons of toxic water into the environment. It discharged 17 million gallons of crude into unlined pits, some as deep as 30 feet, on the forest floor. There is no telling how many species succumbed to the horrors of such unbridled greed.

But this is also a story of environmental racism. For decades, Indigenous people of this region were told that the oil was no threat to them. On the contrary, many of them were told that it had medicinal value and contained “vitamins.” Thousands of people used that water. They drank it, cooked with it, bathed in it, oblivious to the danger. After seeing a spike in birth defects and cancers, that danger became increasingly clear. Unable to relocate because of crushing, imposed poverty, they are forced to live in this human-made disaster area, even though it is slowly killing them.

Despite losing its legal battle, as well as an appeal to the highest court in Ecuador which ordered them to pay 9.5 billion USD for clean up and healthcare for the communities affected by its crime, Chevron has yet to pay a dime. Even the Hague, that supposed bastion of justice that wastes no time prosecuting African dictators, sided with Chevron’s corporate criminals.

And the company has done everything it can to persecute its victims, and hold them responsible for its own malfeasance. It has ruthlessly gone after the Indigenous people who dared oppose it, as well as their defenders. One is human rights lawyer, Steven Donziger, who was largely to thank for winning the case against Chevron. He has been under house arrest for nearly 600 days due to a spurious charge by a judge well known to be in the pocket of Big Business.

Indeed, Chevron is attempting to use an American statute, once reserved for prosecuting the Mafia, on Indigenous land and water defenders, environmentalists, and anyone who stands in solidarity with them. The ramifications for this are, of course, chilling to say the least. If they succeed, there is nothing to stop other corporate abusers in going after Indigenous people elsewhere, or other human and environmental rights activists.

Of course Chevron is not alone. The industries responsible for carving the great, festering wound in the living loam of the earth, known as the Alberta Tar Sands, have managed to suppress information regarding adverse health affects on Indigenous people in that region for many years. Even in this case, it is environmental racism writ large with health authorities blaming Indigenous people’s illnesses on “poor eating habits, obesity and smoking” rather than the obvious pollution being spewed into the atmosphere or poured into waterways from nearby plants. They routinely side with Big Oil against Indigenous people and the biosphere in one of the most greenwashed countries in the world.

And in the Niger Delta, one of the most important wetland regions on the planet, Royal Dutch Shell has been systematically devastating wildlife and water for decades with near impunity. Gas flares contaminate the air with benzene, causing birth defects and cancer among the Indigenous communities. Over the past fifty years an estimated 1.5 million tons of oil has spilled into the ecosystem.

Shell’s ecological destruction goes hand in hand with its brutal suppression of human rights. Its presence in the Niger Delta has brought deforestation, water pollution and poverty. Nearly 85 percent of all oil revenues go to less than 1% of the population in a country where, according to the African Development Bank, more than 70 percent live on less than one US dollar per day.

None of this would be possible without the marriage of the corporation and the state. Shell has had a long history of assisting and directing the Nigerian military in the violent suppression of dissent and protest; and Indigenous environmental activist Ken Saro-Wiwa presented a problem to the oil giant in that he organized defiance of their destruction of Ogoni lands. On November 10, 1995, Saro-Wiwa was among nine other Ogoni activists murdered after being convicted in a kangaroo court at the behest of the company. Today, the plunder and devastation of the Niger Delta continues.

For decades fossil fuel industries, as well as other extractive companies and corporations, have managed to wreak devastation on our fragile biosphere with no consequence for their crimes. Indeed, they have succeeded in controlling a weak global judiciary beholden to corporate interests. But humanity is in an existential crisis like never before. We can no longer stand idly by while the corporate state ravages our world and our future before our eyes. Indigenous people have been calling for us to recognize the deathward trajectory of our political and economic order for centuries. And if we continue to ignore their plea for sanity it will be at our collective peril.

5 thoughts on “The Amazon Chernobyl is a Warning for Us All, by Kenn Orphan”