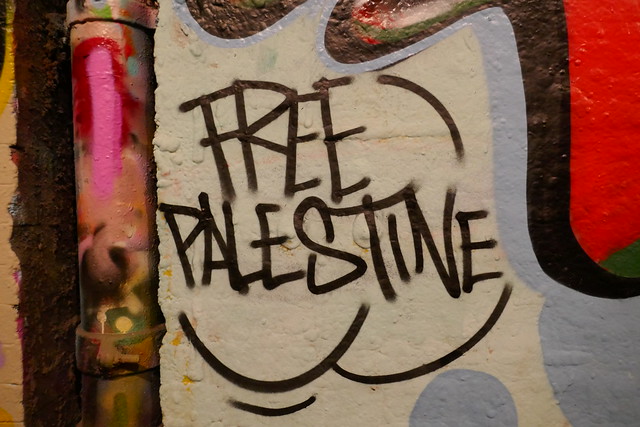 Fortunately, there has been a noticeable shift in public opinion. Even among many American Jews there has been increasing unease with being associated with such an obviously belligerent and sadistic colonial settler regime. Much of this is thanks to the tireless work of organizations like Jewish Voice for Peace. The recent reports from Human Rights Watch and the Israeli human rights organization B’Tselem which detailed Israel apartheid, have also been instrumental in providing a framework that can be used to understand and confront this decades long injustice. But it is also largely thanks to the Black Lives Matter movement which galvanized public outrage in the wake of the brutal police murder of George Floyd. Justified parallels are being drawn between systemic racism in the US and the intricate system of apartheid in place in Israel/Palestine. And, in both instances, the self defense excuse is wearing thin on anyone who has a conscience.

For years Israel has justified its periodic carpet-bombing rampages in Gaza as its right to “self defense.” But that narrative is beginning to sound an awful lot like American police when they tell Black people to “stop resisting” as they kneel on their necks. It falls apart upon close inspection of the facts on the ground. Just as the case with the police, one cannot claim to have feared for one’s life if you are the one holding the gun and have your supposed attacker in handcuffs on the ground. Gaza and the Occupied West Bank and Jerusalem resemble the Bantustans of apartheid South Africa. They are captive populations in shackles, with no say in how they wish to be governed, constantly subject to arbitrary and violent punishment by the state of Israel.

After Israel’s heavy bombardment of the captive population of Gaza last week, unprecedented mass protests have swept over the entire world. But make no mistake, Israel is wasting no time now with its public relations campaign. It realizes that its image as the Middle East’s “only democracy” has once again been shown for the farce it is with videos on social media showing Palestinian families being violently removed from their homes in Sheikh Jarrah to make way for Jewish settlers, many of whom were not even born there and come from the US or Russia.

These campaigns to sway international perception of Israel, known as hasbara, are nothing new and they are not unique to them either. Apartheid South Africa made many attempts to restore its image on the world stage as it violently oppressed its Black population. The infamous Sun City courted international celebrities to play in its one and only “integrated” enclave. And during segregation in the US the government routinely sent Black artists on international public relations tours to obscure the cruel reality of Jim Crow segregation and create an illusion of American inclusiveness.

It is important to remember this when apologists for Israeli apartheid say things like “there is no apartheid in Israel since Arab citizens can vote and there is an Arab on the supreme court there.” Oppressive systems often engage in what is known as tokenism as a way of distraction. In other words, placing some members of an oppressed population in positions of authority or high esteem as judges or heads of departments or as celebrities.

This is an insidious tactic that has long been used in the US by its ruling class. President Biden’s own cabinet picks reflect a lot of this. A person from Cuba to head the Department of Homeland Security. A Black person as Secretary of Defense. A woman to head the Department of the Treasury. Tokenism is obfuscation. It gives the illusion of inclusion and change when, in fact, it is primarily optics. Nothing of substance in regard to policy or systemic operations of government change in the least.

Israel is no different in this regard. It routinely parades the LGBT community and Black Israelis on the world stage in an effort to obscure its fundamentally discriminatory and oppressive apartheid system. It is a cynical approach which, sadly, often works. But fortunately, this game is beginning to lose its edge.

Apartheid is easily demonstrated to most reasonable people when presented with the facts on the ground. Within Israel, towns and neighbourhoods have committees that have the right to exclude whomever they want on the basis of ethnicity or religion. Those that have a Jewish majority can effectively ban non-Jews from living where they want, echoing the redlining practices in the US that excluded Black Americans from purchasing homes in predominantly white, middle-class neighborhoods. Many Palestinian and Bedouin communities are disproportionately discriminated in building permits and are often disconnected from basic services like water and garbage collection. In fact, there are over 65 laws that discriminate against Palestinian citizens of Israel and it allocates only a fraction of its budget to Palestinian Israelis councils.

In addition to this, nearly 3 million Palestinians in the occupied West Bank and Jerusalem live under Israeli occupation. Israeli apologists claim that the Palestinian Authority is their government when, in actuality, it is merely a proxy government for the occupation. Thanks to the corrupt Oslo Accords, Israel has effectively divided the occupied West Bank into three administrative areas. In all but one of those areas, Israel has absolute control. Palestinians in the remaining area are still subject to the Israeli occupation by way of the administration of its proxy, the PA.

All Palestinians in the occupied West Bank and East Jerusalem face home demolitions, walls, barriers, separate roads, scores of dehumanizing checkpoints, daily violence from Jewish settlers that include being shot at and the burning of olive groves, and military tribunals instead of civil courts like their Israeli settler counterparts. Palestinian children are routinely spirited away in terrorizing night raids and taken to detention centers that are often undisclosed. There they often face abuse and neglect.

And over 2 million Palestinians in Gaza, which has been blockaded and besieged for nearly 15 years, have absolutely no say regarding their unjustified imprisonment or the routine collective punishment meted out by the Israeli military. These Palestinians are subject to indiscriminate bombing and are prevented from leaving the Strip by Israel and Egypt. The UN has warned repeatedly that Gaza will be unlivable thanks to poverty, scant access to clean drinking water, and routine Israeli drone surveillance and bombardment.

As the conviction of Derrick Chauvin was no cure for US police state violence, the ceasefire between Israel and Gaza offers no solution for ongoing Israeli ethnic cleansing and apartheid. It may provide some relief, especially to the people of Gaza who were mercilessly terrorized for 11 days by one of the world’s most sophisticated military powers. And it may ease the consciences of those simply weary of the story dominating headlines and social media timelines. But it does nothing to solve the entrenched problem itself. Only through ongoing public pressure and mass movements will systems change. Now, more than ever before, it is crucial that the spotlight on Israeli apartheid not fade.

11 thoughts on “The Spotlight on Israeli Apartheid Must Not Fade, by Kenn Orphan”