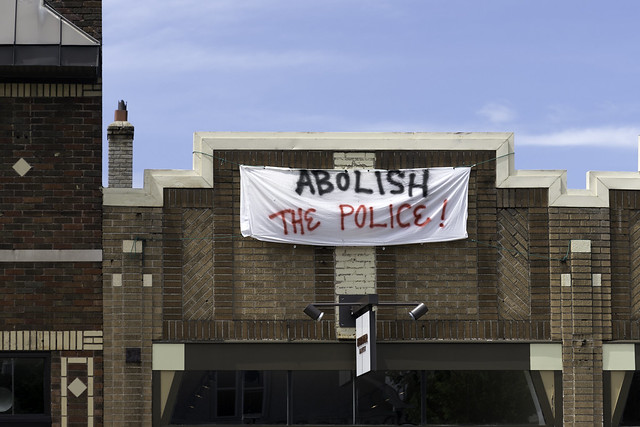 “Police push millions of people into the criminal punishment system, where anti-Black death-dealing rises through each circle of hell. Black people comprise 13 percent of the U.S. population but roughly 30 percent of the arrested, 35 percent of the imprisoned, 42 percent of those on death row, and 56 percent of those serving life sentences. Inside the largest prison system on the planet, the Covid-19 death rate is five times that of the general population. The roughly eight hundred U.S. military bases the world over — like the nation’s birth in native dispossession and slavery — reinforce the lessons that Trump’s brand of white brothers know all too well: take by force and invent the racial enemy. We live in the age of human sacrifice, says Ruth Wilson Gilmore, and our prison and military machinery normalizes industrialized killing. We must abolish the prison-industrial complex … .”

That the military-industrial complex itself went missing from that last sentence reflects the fact that it isn’t the topic of the book. That it got mentioned in the preceding sentences is remarkable. Outside of anti-prison and antiracist activism, one is hard-pressed to find any advocate for anything good under the sun who mentions war abolition even in passing.

Police and war abolition have a lot more in common, however, than the reluctance of well-funded respectable reform movements to support them. The two causes confront similar, dehumanizing, fear-driving myths and misunderstandings. Both have to help people outgrow their belief in the good war or the good prison sentence, and the fantasy of putting police to benevolent use or deploying the military to handle disaster relief. Both have to explain why reforms don’t help, and educate on what must replace the evil institutions that they are accused of wanting to simply tear down. Both must work on structural changes and cultural changes, tackling systems as deeply embedded in psyches as in public budgets. Both know the centrality of re-directing resources. Both are potential sources of massive funding for human and environmental needs if they can redirect it.

Both are taking on the worst actor in the U.S. government(s) and thus have the rest of the world to point to for big steps in the right direction — even as many other governments engage in their own awful policing and warring. Both are opposing institutions falsely imagined as affairs of adult males. Both institutions are, in fact, largely imaginary and false in people’s common pictures of them which consist of battlefields with ground “defense” forces, and lenient courts with “correctional” officers. Prison abolitionists must shatter concepts of idealized victims (and the debasement of non-perfect victims) while war abolitionists must point out the unwanted knowledge of what preceded the sacred assaults on innocent and pristine Pearl Harbor and the Pentagon/World Trade Center. Police largely create riots, and militaries largely create armed enemies. Prisons fuel recidivism, and U.S. wars are waged against U.S.-made weapons and dictators. Yet reality looks upside down to those who still need to be brought into the police and war abolition movements.

Something else connects these two movements. They’re up against, in many cases, the exact same people: the same profiteers, politicians, and pundits, as well as many of the same people “serving” as soldiers, police, and guards (in sequence and simultaneously). We Do This Till We Free Us describes a failed effort in Chicago to halt the creation of a new police academy by then-Mayor Rahm Emanuel, which of course did not completely fail as it did educational work in the process. Advocates for peace had been opponents of Emanuel for many years. Now, there’s something of a joining of efforts in opposing his nomination for ambassador to Japan, assisted by all the organizing that was done in Chicago when he was mayor.

And, of course, joining abolition efforts makes them stronger. If those seeking to abolish the MIC help out those seeking to abolish the PIC and vice versa, both gain — and so does the pot of funding they collectively strive to redirect into something useful. The WorldBeyondWar.org website that builds a case for war abolition could be tweaked to produce a World Beyond Police website, and could be improved by thinking through analogies from the insights of the latter. If either of these abolition movements ever becomes respectable in corporate media outlets and foundations there will be a tendency of course for it to shun the other, but I hope it will be resisted by those who understand the world we need to create, and I hope that in the meantime both movements can resist the temptation to imagine that they can know that their movement will be the one to succeed first. Nobody can be divided and conquered who doesn’t choose to be.

Chris Hedges: Our National Conversation on Race and Crime is Based on a Fiction

10 thoughts on “Abolishing Police and Abolishing Militaries, by David Swanson”