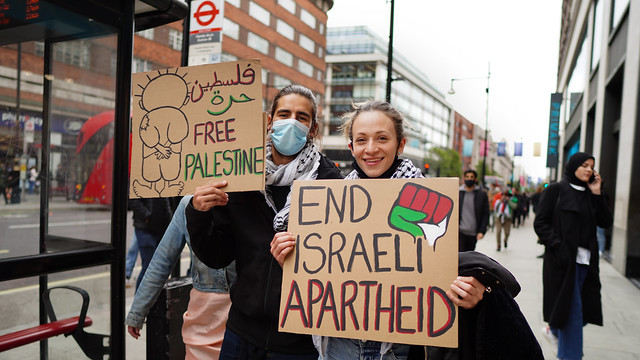 The liberal icon Bill Maher, never interested in understanding the long history of injustice in the region, wasted no time in defending Israel’s murderous crimes and attacking anyone who opposed them. He never does when it comes to the Palestinians. Representative Ilhan Omar was pilloried by politicians in both parties and talking heads for simply stating the obvious. And “journalists” like Melanie Phillips, a darling of the far right, came out recently with a laughable article decrying a new so-called “Palestinianism” of the left, and absurdly warned that support and solidarity with Palestinians is “opening up a new Nazi front” against Jews.

Anyone who has had any experience in Palestinian solidarity is hardly surprised by any of this. These tactics have always been used generously against anyone who even lightly criticizes the state of Israel. But there is something different now. Since extensive reports from Human Rights Watch and the Israeli human rights organization B’Tselem outlined the details of Israeli apartheid, the Israeli brand has been tarnished with the stain of racism. In the era of Black Lives Matter, this is something that cannot be easily shook. But while there are growing, global mass movements opposing all forms of racism and apartheid, most governments, particularly in the West, continue to follow the party line when it comes to Israel.

Recently, the US, Canada, the UK and Australia stated they will not send delegates to the annual anti-racism conference in Durban, South Africa because they are concerned about antisemitism. Since there is a concerted effort to equate antisemitism with any criticism of Israel or the political ideology of Zionism, it makes it easy for them to make such a ludicrous claim. But this is especially rich coming from nations either founded through the usage of racism to justify slavery and the violent ethnic cleansing of the indigenous populations or whose imperial projects were steeped in racist ideology to justify colonialism. And it is worth remembering that these same nations were at the forefront of defending apartheid South Africa decades ago even as a worldwide movement against the racist state was growing.

The supposed “indignation” of these countries is rather trite and transparent. This isn’t about condemning the vile social hatred of antisemitism. This is about the defense of a client state that has served as an asset to their neo-imperialistic interests and aspirations in the region. But this defense is becoming more untenable by the day as evidence piles up proving the crime of apartheid beyond any doubt. The conference will go on despite the tantrums of these states, and that may be for the best. They would only muddy the waters of discourse with meaningless platitudes, something their politicians have excelled at.

The decades long oppression of the Palestinians appears to be coming to a head. And there is growing global opposition to blind support of Israel so long as it continues its brutal system of apartheid and ethnic cleansing. Most of this opposition is not falling for the old tricks used by apologists to derail any meaningful criticism or demands for the basic, equal human rights of the Palestinians. The shame of apartheid is far greater than any of the lies generated to defend it. But, make no mistake, it won’t stop them from trying.

7 thoughts on “Defending the Shame of Apartheid, by Kenn Orphan”