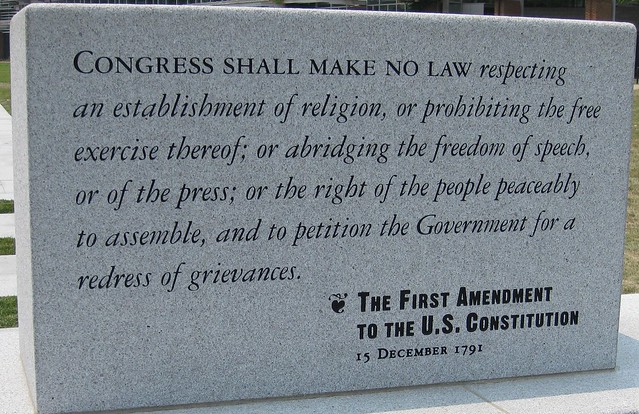 The First Amendment to our Constitution declares that Congress cannot abridge the right of the people “…to petition the Government for a redress of grievances.” Unfortunately, this vital tool of our democracy is easily circumvented by Congress simply not responding whatsoever to “petitions” by the citizenry. This government undermining of our constitutional right is producing invincibly incommunicado government officials.

Countless times over the years, I have asked civic group leaders about the outcome of their “petition,” their deliberative letters, their serious requests regarding desired policy changes, public hearings, new initiatives, and reversal of courses of actions. Their replies have almost always been no answer, no response, didn’t hear from them, and not even an acknowledgment of receipt.

I am not referring to congressional “casework” matters or letters and calls from campaign donors, social buddies, nor the easy letters by politicians on the occasion of birthdays and graduations.

I am referring to letters about serious matters of government raised by the citizenry. George W. Bush, during the weeks leading up to his criminal, bloody invasion of Iraq in 2003, received over twelve urgent, organized requests to meet from Americans. These requests turned out to be prophetic in their warnings about the deadly consequences of this unconstitutional, illegal war. These informed entreaties came from large religious organizations, business, labor, peace, veterans, lawyers, and women’s groups, as well as former intelligence officials, some of whom had recently returned from Iraq or had direct experience with the region.

They wrote, telephoned, and emailed the White House. There was not even an acknowledgment. It was as if these citizens did not exist.

Over two years later the American Bar Association (ABA) – the largest membership organization of lawyers in the country – sent Bush and Cheney three “white papers” written by ABA task forces of lawyers who served under both Republican and Democratic Administrations. These task forces charged the White House with three significant violations of the Constitution (See: https://nader.org/2013/04/19/aba-white-papers/). The ABA did not receive an acknowledgment, never mind a response. There wasn’t even a White House referral for review by the Justice Department for a response.

Our experience in recent years has confirmed that being an arrogant, incommunicado government official is now entrenched government policy. Yet, such closed-door inaction is not considered news by the media, including the independent media.

Together with two leading constitutional law specialists, Bruce Fein and Louis Fisher, I have sent scores of requests for action regarding an array of criminal and civil violations – many impeachable offenses – by Trump to the Executive Branch agencies and departments as well as Democratic leaders in Congress. Only one response from Senator Tim Kaine (D-VA) was received, only because the letter was related to his prior support for invoking the 25th Amendment.

But our letters went way beyond Trump. Letters of import were sent, backed by phone calls and emails to Commissioners of the Federal Trade Commission (FTC), the Federal Communications Commission (FCC), and the Securities and Exchange Commission (SEC), the U.S. Department of Defense, the U.S. Secretary of the Treasury, chairs of Congressional Committees and Subcommittees, and many more. We received no response, nor any acknowledgment. Into a depthless void they were sent, by people whose jobs, salaries, and power come from the sovereignty and tax dollars of the people.

Some of these politicians might be considered political allies. Try getting Senators Elizabeth Warren (D-MA) and Bernie Sanders (I-VT) to return a call or respond to an invitation to be on our weekly radio show and podcast to discuss serious matters. Progressive chairs of the Senate and the House Committees on Financial Services became incommunicado after receiving two of our requests to hold long-overdue hearings on public banking and reinstating the postal savings bank. Both Senator Sherrod Brown and Congresswoman Maxine Waters chose to be incommunicado.

Among the worst is crypto Republican, the nominally Democratic Chair of the tax-writing U.S. House Ways and Means Committee, Richard Neal (D-MA). (https://neal.house.gov/).

After one hundred or more serious letters to George W. Bush and Barack Obama went unanswered, I compiled them into a book titled, Return to Sender: Unanswered Letters to the President, 2001-2015, Seven Stories Press 2015 (See, https://nader.org/books/return-to-sender/).

We don’t take our government officials being incommunicado personally. We take this civically and seriously. Even members of Congress routinely do not get replies to their letters directed at the Executive Branch departments. Congressional Committee subpoenas are ignored – subpoenas! – by both Republican and Democratic Presidents. Trump set the all-time record – defying over one hundred subpoenas without so much as an acknowledgment. Why, members of Congress have told us that their own letters to other members of Congress go unanswered!

Last year, former Representative Alan Grayson (D-FL) communicated to his good friends in the House, Rep. Steve Cohen (D-TN) and Rep. Brad Sherman (D-CA), regarding a proposal to shield government Covid-19 scientists from White House madness. He got no response at all.

The straight-arm culture is omnipresent because there is no penalty, no accountability, no legal action possible for inaction, and there is no media exposure. Journalists could care less, because they are more likely to get some response to their inquiries and, if not, they simply report the lack of a reply or comment in their stories. Civic groups do not want to publicly complain, because they would appear powerless and weak. Many simply stop communicating their new horizons and urgencies.

In the nineteen sixties and seventies – until the dark Reagan years – citizen group letters for demands, requests, or advice to government officials were made public. Often the press would report on such initiatives. Politicians felt some heat to hold hearings, demand Executive Branch action, or introduce legislation. Today the absence of media coverage gives our incommunicado government officials little incentive to address civic calls to action.

Today the silence is deafening. Just try calling your members of Congress, not as one of their donors or golf companions, but as a serious informed citizen behaving as described in Civics 101. Note the automated runaround, where you end up not connecting with any real person and leaving a message that goes unanswered.

This shut-out got worse under Covid-19, but long preceded that convenient explanation for not having real human beings answer telephone calls to Congressional offices. The switchboard number for Congress is 202-224-3121. Ask for your incommunicado lawmaker or their chief of staff by name. Be patient, the Congress has taken off most of the summer until after Labor Day while still collecting their pay and perks. All the backlogged undone work on Capitol Hill can be once again deferred and avoided to the detriment of “the People.”

Whatever happened to “We the People,” people? Among other nullifications of your Constitution by Congress is that aforementioned part of the First Amendment. If members of Congress aren’t listening or responding except to commercial lobbyists and some causes that happen by gut-wrenching tragedy to be in the news, Congress just becomes a stone-walling dictatorship for lawlessness, servicing the always welcomed lawless, self-enriching plutocracy.

(To read some of our letters, go to nader.org.)

Chris Hedges: The Death Of The US Constitution

Paul Street: Reflections on the Absurdity of the U.S. Constitution