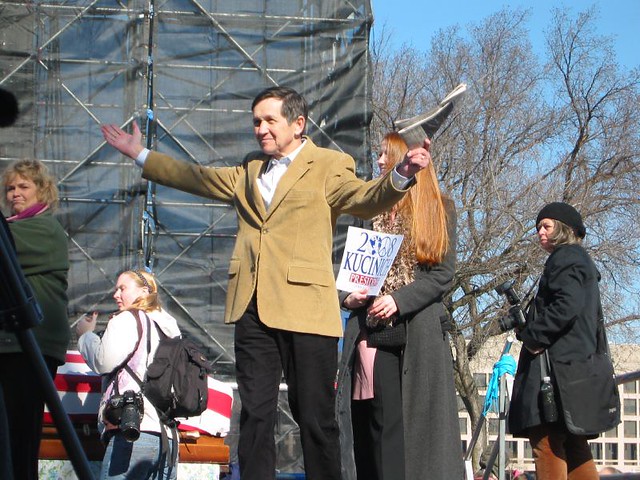 On the show this week, the first of a two-part interview, Chris Hedges discusses the American coup d’etat with former Ohio Congressman, Dennis Kucinich.

Dennis Kucinich served as a U.S representative from Ohio from 1997 to 2013, losing his seat after the state Democratic Party machine redrew Ohio’s 10th Congressional district, a redistricting designed expressly to oust him, although he is a Democrat, from his seat, which is what happened. He was also the 53rd mayor of Cleveland.

As mayor he took on the entrenched power of the big banks and business interests, along with the mob, which controlled City Hall. His anti-corruption campaign included battling back against the efforts to privatize the city’s municipal electric utility, a scheme that would have jacked up utility rates for the city’s residents and netted millions in profits for the banks and the privately owned Cleveland Electric Illuminating Company.

His fearless confrontation with these entrenched centers of power, largely hidden in the shadows, swiftly saw these monied interests mount a vicious assault against him, which included a relentless smear campaign, amplified by a press that obsequiously catered to the interests of its big advertisers, a recall vote, forcing the city into default and even assassination attempts. He was defeated in the next election. In December 2020, Kucinich filed paperwork to run in the 2021 Cleveland mayoral election, where he is currently leading in the polls.

Kucinich’s new book, The Division of Light and Power, looks back on his tenure as mayor and his confrontation with corporate power that today holds most cities and the country hostage.

Kucinich Memoir Is a Moving Account of a Battle Against Corporate Power, by Chris Hedges

Chris Hedges and Dennis Kucinich: The Division of Light and Power, Part 2

Dennis Kucinich Gives his Final Floor Speech of the 112th Congress: We Must Unite For The People

Dennis Kucinich on Fiscal Cliff: Why Are We Sacrificing American Jobs for Corporate Profits?

3 thoughts on “Chris Hedges and Dennis Kucinich: The Division of Light and Power, Part 1”