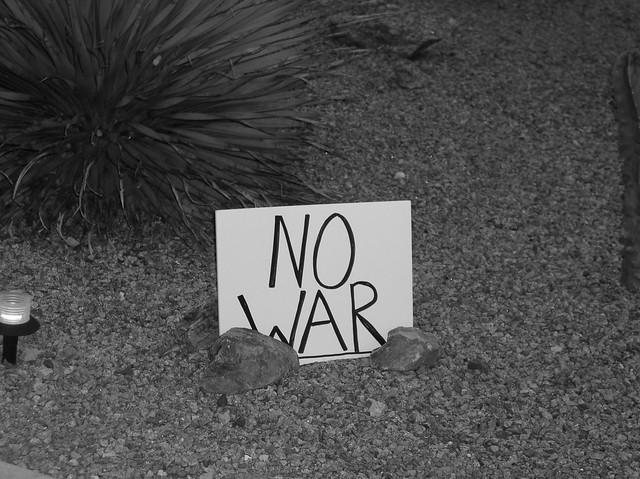 In many ways, war is ever more and less visible. Of course in U.S. academia, the Pinkerist pretense that we are living through a period of great peace is accomplished by all sorts of statistical manipulation, but first and foremost by declaring civil wars to not be wars, and declaring U.S. wars to be civil wars — a tricky thing to do when the minute the U.S. leaves, Afghans, for example, decline to keep killing each other (damn them!).

But in the United States, war and militarism — or some weird shadow of them — are everywhere: endless thank yous, special parking places and airplane boarding, endless recruitment ads and weapons ads, countless movies and television shows. War is relentlessly normalized. And, oddly, the ubiquity of war celebration has made war so unquestionable that there are few objections when war is not mentioned — even on occasions when it should be.

In November, the world’s nations will negotiate climate agreements while explicitly leaving out and giving blanket waivers to all militaries. This is a pro-U.S. action because the bulk of the world’s military spending is by the U.S. or on U.S. weapons. But it’s simultaneously just a neutral, normal, unquestionable prioritization of everybody’s militaries, since militaries are more important than the earth’s climate.

It’s also part of a common pattern. Militaries are left out of analyses of the spreading of COVID. Despite constituting the majority of federal discretionary spending, it’s hard to find a discussion of public spending, or a campaign website for a U.S. Congress Member that mentions the existence of military spending, war, peace, treaties, the State Department, or 96% of humanity. We have movies about PFAS chemicals that omit the biggest spreader of them. We have environmental groups concerned about super-fund disaster sites but not the entity responsible for the vast majority of them. We have anti-racist campaigns unconcerned about the consistent boost to racism given by wars. War veterans are very disproportionately U.S. mass shooters, but the number of news reports mentioning that fact could be counted on the fingers of someone with both arms blown off. The Green New Deal, like the infrastructure and reconciliation bills, is oblivious to either the funding available in militarism or the damage militarism does — well, not the reconciliation bill which proposes massive military spending increases for each of the next 10 years, something so normal and pro forma that opponents of increased military spending recommend not noticing it. Civil liberties groups have no objection to the freedom-eroding wars, and even support adding women to the group of people who can be forced into wars against their will. Multi-issue coalitions for progressive causes typically omit peace — and I have to imagine most weapons dealers don’t mind that a bit, because when you erase peace you also help erase war.

Sometimes war can’t be kept out of the news. But even then it doesn’t show up as war. It’s transformed — in the latest instance — into a mishandling of an evacuation, giving the impression that the worst horrors of a 20-year war are all to be found in its final days. We always seem to miss the fact that wars are one-sided slaughters of huge numbers of human beings — with equally huge numbers injured, traumatized, and made homeless and at risk.

Collecting reports on war deaths in Afghanistan from direct violence gave Brown University’s Cost of War Project a total of about 240,000. Nicolas Davies has pointed out that in Iraq in 2006 you had to multiply the reported deaths by 12 to get the number arrived at by scientific surveys conducted in Iraq, and in Guatemala in 1996 you had to multiply by 20. Starting with 240,000 and multiplying by 12 gives us 2.8 million possibly dead directly from war violence in Afghanistan. Multiply by 20 and you get, instead, 4.8 million. Interest in this question is limited in the extreme. There have been no serious studies conducted in Afghanistan. The U.S. corporate media reports on the topics are as nonexistent as humanitarian wars. And according to President Biden, “American troops cannot and should not be fighting in a war and dying in a war that Afghan forces are not willing to fight for themselves.”

In fairness, Biden was upset at the moment by the failure of a new civil war to materialize. Nonetheless, someone could have told him that Afghan military deaths were at least 10 times those of the U.S. military. Or the entire so-called intelligence so-called community could have been replaced by a single historian or peace activist, and the likely fate of foreign occupations might have been grasped 20 years earlier.

Ditch The Draft, Once and For All, by Rivera Sun

8 thoughts on “War: Ever More Present and Absent, by David Swanson”