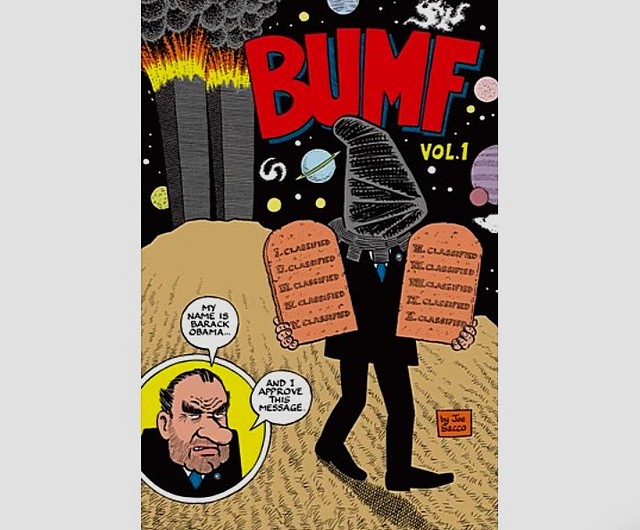 On the show, Chris Hedges discusses the nature of satire with investigative reporter and cartoonist, Joe Sacco.

Joe Sacco is one of the world’s foremost cartoonists, his work translated into at least 14 languages. He invented the genre of graphic journalism where meticulous and rigorous reporting is wedded to illustrations, a process that can take years. He has written and drawn numerous masterpieces such as Palestine, Gorazde: A Safe Area, The Great War and one of the finest books on the Palestine-Israel conflict, Footnotes in Gaza, which took six years to complete and documents the Israeli massacres of Palestinians during the Israeli occupation of Gaza in 1956, a massacre all but written out of the history books.

But Sacco is also a gifted satirist, and it is his satire, especially his underground comic Bumf—the British slang for bum fodder or toilet paper—we are going to explore. He turns his razor wit and scabrous illustrations to castigate the sadistic folly of American foreign policy and the vacuity of its political class, bringing Richard Nixon back to life where he wakes up in the White House in bed with Michelle Obama. Nixon, freed from the legal constraints that led to his impeachment, is overjoyed at the emergence of the surveillance state, the militarized drones that drop ordinance on whole groups of people, along with the license to kidnap, torture and assassinate supposed enemies of the state, even U.S. citizens. Nixon is taken to another planet, and after all if you are kidnapped, hooded, shackled, dressed in a diaper, sedated and flown thousands of miles in a CIA transport plane to a black site it might as well be another planet, where everyone is naked and hooded. Reporters in this world have been domesticated, bought off to serve as shameless courtiers to power. Sacco assumes the role of the court lackey in the comic, writing drivel to amuse and entertain the masses in the dystopia that has become America. Sacco knows, as Hannah Arendt wrote, that “the greatest enemy of authority, is contempt, and the surest way to undermine it is laughter.”

Joe Sacco on Journalism and War, interviewed by Chris Hedges

Joe Sacco: Footnotes in Gaza + Footnotes to a forgotten war by Laura Durkay

One thought on “Chris Hedges and Joe Sacco: The Nature of Satire”