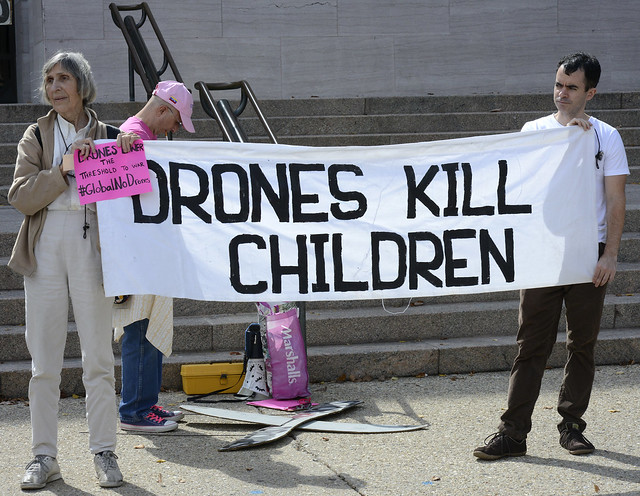 So a top US commander has come clean on primetime TV about the killing of 10 civilians in Afghanistan with a drone missile. Seven of the victims were children packed into a car.

CentCom General Kenneth McKenzie said the deadly strike was a “tragic mistake” and he offered his “deep condolences”. In an unprecedented televised press conference, the general said he took personal responsibility for the atrocity and that there would be financial compensation paid out to the victims’ families.

He didn’t offer his resignation though, which might seem appropriate for someone taking responsibility for such a heinous event. Neither did the Pentagon commander explain how compensation would be arranged given that the US evacuated from Afghanistan on 30 August with no officials now present in the country.

General McKenzie went to great lengths in his press conference to claim that the vehicle was surveilled carefully for several hours before the drone missile was launched, killing all the occupants. He presented a graphic to illustrate the detailed movements of the targeted car near Kabul international airport on 29 August. This was the day after a suicide bomber killed 13 US troops at the airport along with over 100 Afghan civilians trying to join the frenzied American airlift.

The general emphasised how his staff were under immense time pressure when they were assessing the target whom they believed was an ISIS terror team on its way to bomb the airport again.

What is objectionable about McKenzie’s apology live on TV is the impression of an exceptional error by US forces.

The reality is that civilians are routinely murdered by US drones in Afghanistan and several other countries where the Pentagon is operating, oftentimes illegally in violation of international law. Killing innocent people is not an “exceptional error” for US forces, it is the norm.

Daniel Hale, a former US Air Force analyst who turned whistleblower, was imprisoned in July for revealing the horror of civilian casualties from drone strikes in Afghanistan. He told a judge that 90 percent of victims were innocent civilians. Hale said he was sickened by the indiscriminate slaughter. For his truth-telling, he is now behind bars.

The use of Unmanned Aerial Vehicles was expanded under the Obama administration and they were deployed in Afghanistan, Iraq, Pakistan, Yemen, Syria, Somalia and Libya. Obama personally selected targets every week in briefings from the CIA in what became known as “Terror Tuesdays”.

It was claimed that during the Obama drone assassination programme that the total number of civilians mistakenly killed was just 117. That figure was derided as a gross underestimate. The Bureau for Investigative Journalism puts a more accurate death toll at six times higher. Even the latter may be an underestimate.

The fate of truth-tellers who reveal the murderous nature of US military occupations in foreign countries is to be buried behind bars. Julian Assange’s biggest “crime” was showing to the world the systematic killing of civilians by US forces in Afghanistan and Iraq. Assange is being held in a maximum-security prison in England awaiting the outcome of an extradition order by the US where he faces 175 years in jail for “espionage”.

People like Julian Assange and Daniel Hale are heroes who should be venerated publicly and given lifetime awards.

Meanwhile, the real criminals are given primetime TV to parade their insipid apologies while taking no responsibility for the murder. Saying “sorry” means nothing when the killings will go on and on. It’s just a sorry cover-up for US imperialism and its routine war crimes.

Unlike many other US drone murders of civilians that are brushed away into oblivion, the killing of 10 civilians in Kabul only came to light because one of the victims worked for a US charity. Otherwise, the Pentagon would have ensured that the atrocity was buried in a bureaucratic cover-up. The innocent victims like the truth-tellers are always buried.

General McKenzie’s “honourable” mea culpa is sick performance art. It is aimed at reassuring the American public that we really are the good guys who rarely commit atrocities. And when we do, then it is an exceptional “tragic mistake” for which we are truly “sorry”. That gives US imperialism a license to continue criminal wars, aggression, occupations and Mass Murder Inc.

Blinken on Damage-Limitation Tour After Afghanistan Fiasco, by Finian Cunningham

Chris Hedges: We Know the Truth about Drones Because of the Courage of Daniel Hale

Drone Murder Has Been Normalized, by David Swanson

13 thoughts on “Sorry Cover-Up for US Mass Murder, by Finian Cunningham”