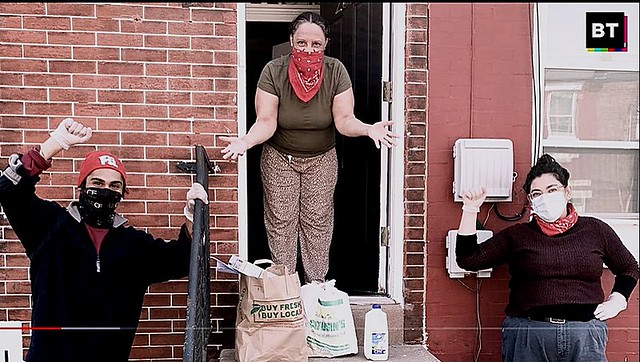 The Unity and Survival Program of the Philadelphia Liberation Center provided essential food support to a struggling population as the pandemic wreaked havoc. Their success demonstrates that the problem of hunger stalking the United States could be solved if there was sufficient political will to do so.

The COVID-19 pandemic supercharged the situation, exposing even those who felt “secure” to the possibility of going without eating. In a society where food is not a human right, but a good to be purchased, how were people supposed to eat if they couldn’t work?

The short answer: they didn’t. Receiving almost no help from the federal government, working people in the United States were laid off by the millions. Overnight, people suddenly found themselves wondering where their next meal would come from. Families were forced to choose between buying life saving medications and buying enough food to feed their families.

BreakThrough takes an extensive look at the Unity and Survival Program, detailing just how a group of socialist-led volunteers came together to start feeding hundreds of working-class families in Philadelphia as the Covid-19 pandemic raged around them.

Audio mix and musical score and by John Prysner

The Unity and Survival programme of the Philadelphia Liberation Center provided essential food support to a struggling population as the pandemic wreaked havoc.

According to the United Nations, the world produces enough food to feed 10 billion people. Yet this year, even in the United States, one of the world’s richest countries, one in three American families with kids went hungry. Even before the pandemic, in 2019, official statistics from the US Department of Agriculture detailed that 35 million people went hungry – 10 million of them children.

The Covid-19 pandemic supercharged the situation, exposing even those who felt “secure” to the possibility of going without eating. In a society where food is not a human right but a product to be purchased, how were people supposed to eat if they couldn’t work?

The short answer: they didn’t. Receiving almost no help from the federal government, working people in the US were laid off by the millions. Overnight, people suddenly found themselves wondering where their next meal would come from. Families were forced to choose between buying life-saving medications and buying enough food to feed their families.

In fact, in early summer 2021, 63 million people in the US told government investigators that they were unable to pay for their usual household expenses, in particular the balance between food and rent, but also including student loans and medicines.

The struggle to survive

This was the context out of which the Unity and Survival programme was born in the city of Philadelphia, a representative example of the type of “mutual aid programmes” that sprung up across the US during the pandemic. The initiative, launched by the Philadelphia Liberation Center, aimed to fulfil the duties that the government had failed to carry out during the global pandemic. It had a straightforward task: identify Philadelphia residents who were struggling to acquire food, deliver it to them and build a more dense community network to mobilise in defence of the right to life.

A delivery network in particular was a crucial element to the programme, as one volunteer organiser noted: “There was a high degree of fear and uncertainty and a reluctance on the part of many residents, not only in this neighborhood, but I’m sure throughout the city and the nation to expose themselves to the Covid virus. With so many seniors and people with chronic health conditions in the area, we felt that we needed to organise not just the supplies, but the network to distribute them.”

Initially, organisers of the Unity and Survival programme sought food donations and created a GoFundMe campaign to pay for groceries. The online fundraising platform became a popular way for people to finance basic needs like food and medical costs during the pandemic, since government support was insufficient. The Unity and Survival programme provided crucial assistance to families in precarious positions during this early period, which garnered the initiative nationwide attention and support.

Within months, the programme caught the attention of non-profit groups in the city. They began donating food boxes, significantly increasing the amount of food delivered. The programme also expanded its reach by adding community members to the delivery teams.

Organisers of the Unity and Survival programme identified community leaders and food box recipients who were interested in supporting the initiative and made them “block captains”. The block captains were responsible for making sure food boxes with groceries were delivered to their own neighbourhoods, thus multiplying the reach of the programme.

One notable factor of the block captain network is the importance of a familiar, trusted face, which helps overcome the shame that comes along with seeking assistance in a society with an extremely individualistic, “up by the bootstraps” ethos.

As one block captain noted: “My biggest goal when passing out food is for people to get the resource that they need without feeling judged by it, without having any kind of barriers.”

The Philadelphia Liberation Center was also able to mobilise support from community organisations it had worked with in the past in a variety of social struggles. For instance, it teamed up with the Norris Square Community Action Network, active in anti-gentrification struggles.

It also reached into the faith community, partnering with a church, La Vid Verdadera, with which members of the Liberation Center were already working to tutor Central American immigrants as part of a joint community education programme, Escualita Óscar Romero.

The Philadelphia Liberation Center estimates that it has delivered 100 000 meals so far, a number that is still growing every week. At its height, the Unity and Survival programme was serving 1 000 families every week and is currently serving 750 families, which underscores the continued persistence of hunger, even with a slight easing of the pandemic in the US.

“We’re getting to a point now where we can get a steady stream of food and supplies, which is amazing because just five months ago we had very limited means at our disposal, and we’ve now got to a point where we can look to grow this programme even further,” said another Unity and Survival programme organiser.

Members of the Philadelphia Liberation Center were proud of the apparatus they had built, but they all said the same thing about its weaknesses: it wasn’t big enough to meet the scale of the problem. Although the programme was able to feed tens of thousands of people in Philadelphia, there are tens of millions of people going hungry in the US.

The Unity and Survival programme gives us a glimpse of what’s possible, but it would have to be scaled up on a level only state authorities can reach to significantly reduce poverty in any way. The programme demonstrated that Philadelphia residents are ready and willing to work towards food sovereignty in their city – what’s lacking is the political will.

This is why, in its literature and outreach, the Unity and Survival programme actively challenges the notion that food can be bought and sold for profit, detailing that this is the very reason hunger exists in the first place.

It is something that was clear during the peak of the pandemic last year when videos of farmers dumping unsold milk and crushing unwanted vegetables with tractors went viral. From the perspective of a profit-centric system, the crops were worthless because they couldn’t be sold.

Reflecting on these realities, another programme volunteer told BreakThrough: “You know, that’s why we’re socialists. We believe that only the working class can take care of itself. The bourgeoisie, they’re not going to suddenly get kind and decide to be charitable when, when they become charitable, it’s only for their own preservation.”

An end to hunger, as the Unity and Survival programme emphasises, can be possible only by embracing a socioeconomic system that is intended to maximise human wellbeing, not profit for a few.

The Outlook for the US is Uniquely Bleak, by Finian Cunningham

8 thoughts on “Unity and Survival: Fighting Hunger on the Streets of Philadelphia + Hunger Stalks the United States, by Kei Pritsker and Eugene Puryear”