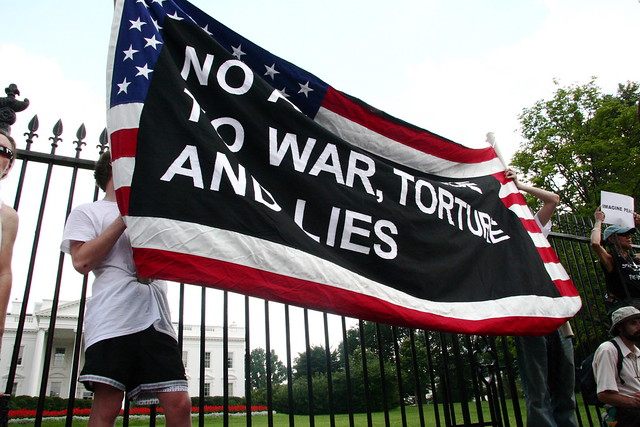 How Afghanistan whether it was the Anti-communist crusade of the 70s and 80s, and the Anti-terrorisms/Anti-Radical Islam crusade of the 2000s and beyond was not a “good war”, how the dissolvement of Yugoslavia and the NATO bombing of Kosovo and Serbia was not a good war, how the First Gulf War against Iraqi supposedly liberating absolute monarch anti-human rights Kuweit from “evil secular/sectarian” Iraq was NOT a good war, and how the EU/Euromaiden/NATO overthrow of the government of Viktor Yanukovych which saw Crimea divorce Ukraine to become part of Russia and a bunch of Western backed oligarchs and Neo-Nazis engaging in a brutal ongoing civil war with possible breakaway Eastern regions was and IS NOT a good war.

And we discuss why is it people are selectively anti-war and not consistently anti-war and anti-imperialist? Why “no war for oil on Iraq” but no war for oil on Venezuela, Bolivia, Libya? Why no to the Western/Gulf war on Yemen but YES to a Western/Gulf war on the secular non-sectarian government of the Baathist government of Assad in Syria? And why mass mobilization against the Vietnam War even amongst Anti-communist leftists but today people supporting a New Cold war on China, efforts to divide and conquer China and supporting reactionary movements in Hong Kong and the Xinjian region and supporting Western backed reactionary Uighur Jihadi separatists in or yet another imperial project in Belarus? How do those of us committed to a world of no war, détente, and truly everlasting peace and no to all forms of imperialism and militarism, how do we convince and explain to people that the Pivot to Asia and more NATO isn’t the answer to a better world? All of this and more in this edition of 1+1. Do enjoy and share widely!

6 thoughts on “David Swanson: We Oppose All Sides of All Wars”