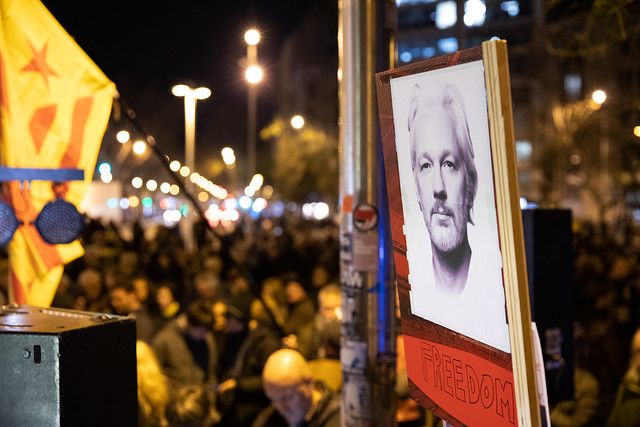 On the show, Chris Hedges discusses the extradition hearing of Julian Assange in London with Joe Lauria, Editor-in-Chief of Consortium News.

For the past two days, Chris Hedges has been watching the extradition hearing for Julian Assange via video link from London. The United States is appealing a lower court ruling that denied the US request to extradite Assange not, unfortunately, because in the eyes of the court he is innocent of a crime, but because, as Judge Vanessa Baraitser in January concluded, Assange’s precarious psychological state would deteriorate given the “harsh conditions” of the inhumane US prison system, “causing him to commit suicide.” The United States has charged Assange with 17 counts under the Espionage Act and one count of trying to hack into a government computer, charges that could see him imprisoned for 175 years.

If Assange is extradited and found guilty of publishing classified material, it will set a legal precedent that will effectively end national security reporting, allowing the government to use the Espionage Act to charge any reporter who possesses classified documents, and any whistleblower who leaks classified information, under the Espionage Act.

The Most Important Battle for Press Freedom in Our Time, by Chris Hedges

A Guide To The U.S. Government’s Appeal In The Assange Extradition Case, by Kevin Gosztola

8 thoughts on “Chris Hedges and Joe Lauria: The Extradition Hearing of Julian Assange”