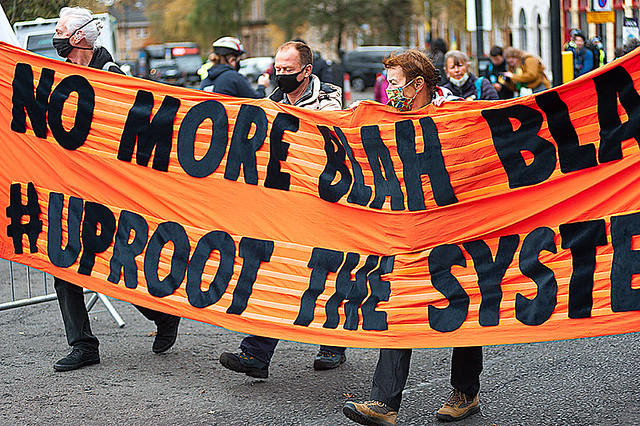 Since the Paris agreement in 2015, the world’s 60 largest banks have poured $3.8 trillion into fossil fuel companies. In the US, auctioning has begun of drilling rights in Alaskan waters and the Gulf of Mexico. In the UK, whose PM is talking about one minute to mid-night, 113 new licenses are offered to explore offshore reserves. Germany is developing new coal deposits. Australia, accounting for about 29% of traded coal globally in 2016, has become the world’s largest coal exporter and near-largest natural gas (LNG) exporter, currently representing around 3.6% of global emissions.

What the above means is that, unless civilization moves to a war-like footing, such as in pre-World War II, in an attempt to reduce and sequester carbon emissions from industrial, agricultural and transport sectors, large parts of the Earth may become uninhabitable.

It is the children, led by an 18 years-old girl, who appear to have the right perspective on what will determine their future, that of humanity and nature.

The alternative is unthinkable.

Andrew Glikson is an Earth and paleo-climate scientist at the Australian National University, studied geology at the University of Jerusalem and graduated at the University of Western Australia. He conducted geological surveys of the oldest geological formations in Australia, South Africa, India and Canada, underpinning the effects of large asteroid impacts, including their effects on the atmosphere and oceans and the mass extinction of species. Since 2005 he studied the relations between climate and human evolution. His latest book is The Fatal Species: From Warlike Primates to Planetary Mass Extinction. He can be reached at Geospec@iinet.net.au.

Eighteen-year-old Swedish climate activist Greta Thunberg called COP26 a “failure” when she addressed the Fridays for Future rally in Glasgow, which drew around 25,000 demonstrators. Her address comes after Thunberg dismissed climate leaders a month prior to the U.N. climate summit for political inaction. “The COP has turned into a PR event where leaders are giving beautiful speeches and announcing fancy commitments and targets, while behind the curtains the governments of the Global North countries are still refusing to take any drastic climate action,” said Thunberg on Friday. “This is not a conference. This is now a Global North greenwash festival.”

Greta Thunberg: “They know exactly what they are doing. They know exactly what priceless values they are sacrificing to maintain business as usual. The leaders are not doing nothing; they are actively creating loopholes and shaping frameworks to benefit themselves and to continue profiting from this destructive system. This is an active choice by the leaders to continue to let the exploitation of people and nature and the destruction of present and future living conditions to take place.”

22 thoughts on “The Road To A Climate Hell Of >4 Degrees C Is Littered With Untruths, by Andrew Glikson + Greta Thunberg: COP26 Is A Failure”