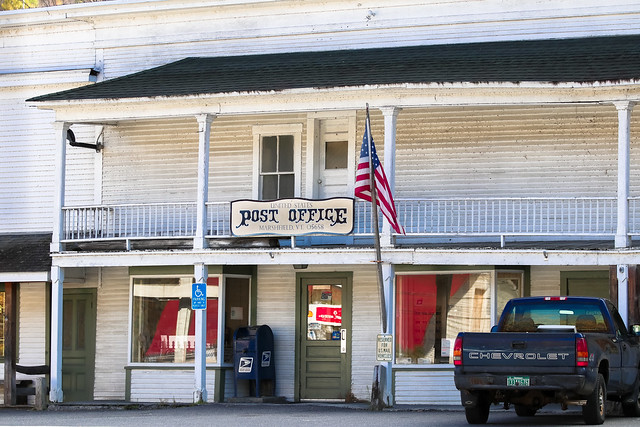 The preventable plight of the U.S. Postal Service, with its over 30,000 post offices, is an important issue for all Americans. When President Donald J. Trump’s donor and henchman Louis DeJoy became postmaster general in 2020, he started to dismantle the agency. Thousands of citizens responded by participating in demonstrations that revealed a deep civic commitment to preserving the people’s post office.

While DeJoy triggered a crisis that threatened the presidential election process, attacks on the Postal Service have been ongoing for decades. The anti-postal campaigns by corporate interests have remained a continuing source of frustration to those of us who have observed the Postal Service’s decline due to unimaginative management, a deck stacked to favor for-profit rivals such as FedEx and UPS, and unfair financial obligations and delivery prohibitions (for example, on wine and beer) imposed by Congress.

The Postal Service is facing a manufactured financial crisis that is primarily the result of a congressional mandate dating back to 2006 that required the agency to pre-fund the next seventy-five years of retiree health benefits in one decade. This pre-payment requirement is something that no other federal government agency or private corporation attempts to do—not to mention that there is no actuarial justification for such an accelerated payment schedule. The pre-funding requirement effectively forces the Postal Service to finance a $72 billion retiree health benefits fund for future employees who have not even been born yet. Despite these facts, Congress has refused to correct the host of problems resulting from its requirements.

The financial pressure resulting from the burdensome pre-payment schedule has led to negative impacts on service for all postal patrons. Postmaster General DeJoy’s ten-year plan proposes saving the agency money through cutting service and raising prices, which is a formula for sabotage. He already introduced service changes that have delayed the delivery of all first-class letters on a permanent basis. As a result, mail is now being delivered up to two days later than before.

Unlike DeJoy, our first postmaster general, Benjamin Franklin, was known for his can-do verve and his appreciation of efficiency and innovation. Franklin was eager to find ways to have the mail delivered more quickly. As a stand-alone structure, he never would have imagined that someday post offices would mutate into a counter or kiosk inside a Staples store—or some other big-box store or shopping mall—as recent postmasters general have urged and widely advertised.

The need for postal reform is not just a matter of endangered post offices, disappearing blue mailboxes, slow mail delivery, or the fight to maintain delivery on Saturday, important as these issues are. Instead of disabling and eventually dismantling the Postal Service, this is the moment to expand postal services. Congress especially must act to protect rural communities, small businesses, the elderly, and the disabled, among others, by reasserting its authority over the Postal Service and putting a stop to irresponsible cutbacks. These policies not only threaten the future of the Postal Service in the long term; in the short term, they harm the ability of small businesses to carry out their operations in a timely manner and inhibit the elderly’s ability to receive essential medications by mail. They also drive ever more consumers away from the Postal Service and toward commercial delivery corporations such as UPS and FedEx.

Post offices ought to offer an honest notary service (badly needed in an era of robo-signings), sales of fishing and hunting licenses, and an option to have gifts wrapped, among other new services. The Postal Service should accept wine and beer for delivery as FedEx and UPS do, and start delivering groceries as well. In addition, there is the widespread need for postal banking, given many millions of Americans are without bank accounts. This service actually existed until 1966 when the political lobbying of bankers terminated the successful and accessible program in communities throughout our country. The Postal Service recently started a pilot program to test check-cashing services in four select post offices on the East Coast. This program needs to be expanded to more post offices and be better publicized.

The future potential of the Postal Service is made clear in the just published book First Class: The U.S. Postal Service, Democracy, and the Corporate Threat (City Lights Books) by Christopher W. Shaw, which could not be more timely. Shaw investigates why this essential service is in danger, explains how to fight back against its dismantling, and explores what can be done to improve and expand our postal system and have more consumer representation on the Postal Service Board of Governors.

Ninety Members of Congress have called on the Postal Service Board of Governors to remove Postmaster General DeJoy. In addition to DeJoy’s ruinous USPS policies, he is under investigation by the FBI over illegal political fundraising tactics, and DeJoy’s family has financial ties with XPO Logistics, a company that in April the Postal Service awarded a multi-million-dollar contract. With the terms of two Postal Service Board of Governors expiring in one month, it’s time for President Biden to appoint new members who will not behave like rubber stamps for DeJoy and his destructive time in office.

The Postal Service is a fundamental institution that binds our country together. It can and should be updated and freed from the shackles of corporations. Showing up is half of democracy, so the question for citizens today is: “Are we going to show up for our post office?” Shaw’s book lights the path forward for all Americans.

Saving the Post Office and Postal Banking: The Models of Kiwibank and Japan Post by Ellen Brown

5 thoughts on “The Preventable Plight of the U.S. Postal Service, by Ralph Nader + Take Action!”