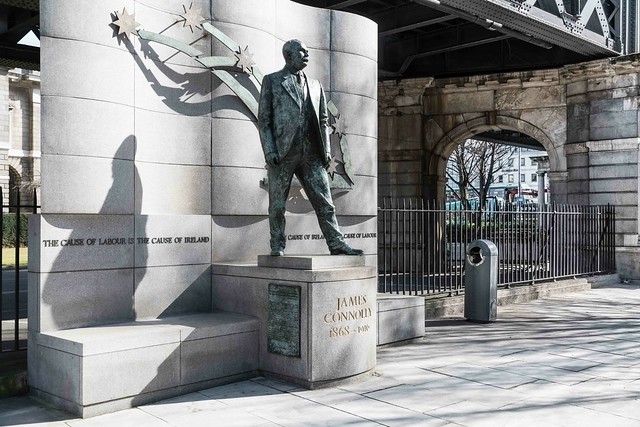 James Connolly is one of Irish Republicanism’s best known revolutionary figures, and upwards of twenty political parties in contemporary Ireland claim Connolly as their primary ideologue. Many more claim Connolly as at least a significant figure in their own particular, and often unlikely, political tradition. Even successive right-wing, Free Stater administrations have paid tokenistic lip-service to Connolly’s legacy by christening utilities after him and commissioning grand statues, akin to corporate art, to the Marxist brought up in the slums of Edinburgh.

A few of the micro-traditionalist Republicans, who would not entertain even the timidest of Socialist thought or principles, habitually claim Connolly, somehow selectively deaf to the tocsin of Connolly’s Marxism. These one-dimensional nationalist entities cling precariously to Connolly’s part in the 1916 Easter Rising as a metaphorical mirror to their own particularly narrow grasp of Irish Republicanism 101. There are also small elements within more radical Irish Republicanism, who would have no difficulties describing themselves as Socialists but who use the Connolly Hiberno-socialist canard as a safe yardstick to distance themselves from those Socialists of a much more Crimson, Marxian hue. To the chagrin of the Hiberno-socialist set, it is well documented that Connolly, Lenin and Luxemburg were harbingers of the new Socialist order.

Connolly was, of course, an Internationalist rather than a narrow Nationalist, and he was a Revolutionary Socialist rather than a one dimensional, physical force Republican. He was as scathing of the armed Liberals of Irish Nationalism in his day, as Lenin was of the severe political limitations of the Narodniks. His views matched Lenin’s on the betrayal of revolutionary Socialism by the Second Internationalists, who jettisoned the principles of International Socialism, just as quickly as the Imperialists banged the drums of jingoism, to herald a new unprecedented mechanized slaughter, in the name of patriotic duty in the days leading towards World War One. Connolly, in his Our Duty In This Crisis written in 1914, could not have been more vehemently opposed to those imperialist social democrats who applauded the forthcoming industrialized carnage than was about to be visited upon the European, Asian, African and American proletariat.

“Should the working class of Europe, rather than slaughter each other for the benefit of Kings and Financiers, proceed tomorrow to erect barricades and destroy the transport services that war might be abolished, we should be perfectly justified in following such a glorious example and contributing our aid to the final dethronement of the vulture classes that rule and rob the world!”

Connolly was not a ‘Left Republican’ in the sense of being an Irish Nationalist with a vague aspiration towards some vague notion of some future Social Democracy. Nor was he an Irish Republican who aimed an occasional nod towards an aspirational, future ‘social justice’ wrapped-up and mostly hidden within the vagaries of some Keynesian mixed economy. James Connolly tirelessly, in almost every single treatise, polemic and article he ever wrote, nailed his Red colors to the mast, in opposition to narrow Irish Nationalism. In Connolly’s brilliant, acerbic, yet compassionate piece, The New Evangel Preached To Irish Toilers written in 1901, he clearly critiques the fraud of supposed love for a harp and shamrock mirage of an Ireland while poverty ravages the proletariat, sentencing the children of the poor to lives of beggary and worse:

“Ireland, as distinct from her people, is nothing to me; and the man who is bubbling over with love and enthusiasm for ‘Ireland,’ and can yet pass unmoved through our streets and witness all the wrong and the suffering, the shame and the degradation wrought upon the people of Ireland – yea, wrought by Irishmen upon Irish men and women, without burning to end it, is, in my opinion, a fraud and a liar in his heart, no matter how he loves that combination of chemical elements he is pleased to call Ireland!”

In Connolly’s ‘Labor and Irish History’, the chapter entitled ‘The First Irish Socialist’ in which he praises the advanced, progressive nature of William Thompson’s Socialism as being light-years more scientifically based than the Utopian Socialists, whose appeals to the supposed good nature and philanthropy of individual Capitalists characterized their naivety. William Thompson, a native of County Cork, although still rooted to some extent in the Co-operative ideas of Utopian Socialists, like Robert Owen, he saw that only the proletariat could emancipate itself, from below and not by the philanthropy of some ‘enlightened’ individual industrialists.

While paying compliments to Thompson’s foresightedness for his era, James Connolly solidly identifies himself with Marx’s Scientific Socialism. Connolly likens Marxism’s ‘unshakable foundations’ to Darwin’s Evolution of the Species; just as Darwin had systematized all pre-Darwinian evolutionary strands, Marx had done similar with earlier strands of Socialism and political economy. Even back then, Connolly identified a reactionary strand of chauvinism, a small rump of narrow nationalism who every so often attempt to attach themselves to Irish Republicanism. Connolly, in defense of Socialism, Marxism, and William Thompson, writes in Labour in Irish History, The First Irish Socialist: A Forerunner of Marx, states:

“It is also curiously significant of the conquest of the Irish mind by English traditions, that Irish Nationalists should often be found fighting fiercely against Socialism as ‘a German idea,’ although every social conception which we find in the flower in Marx, we can also find in the bud in Thompson, 23 years before the publication of the ‘Communist Manifesto,’ 43 years before the issue of ‘Das Kapital.’

Connolly wrote of the poverty of ideology of those Irish Nationalists who view physical force as a principle, not a tactic to be used when needed during a national liberation struggle. There is an unexpected familiar contemporary resonance within Connolly’s ‘Physical Force in Irish Politics‘, as it describes those who resigned in disgust from what became constitutional Nationalist movements. Many of the most gung-ho proponents of physical force, at all costs, were at best, armed liberals, who’d no vision for day two of a successful revolution, let alone a change and a redistribution of wealth. As within contemporary politics, some Republicans who criticize the reformism of the Stormont constitutional politicians are not critiquing their pro-capitalist approach, they are merely scathing of the jettisoning of the tactic of physical force. As in Connolly’s day, many of the physical force Republicans are as reformist in worldview as those they scorn as ‘constitutionalist’. Connolly says of the one dimensional, physical force ‘Republicans’, that seek:

“to enlist the people under it’s banners, not so much by pointing out the base ideals of the constitutionalists or the total inadequacy of their pet measures to remedy the evils under which the people suffer, as by emphasizing the greater efficacy of physical force as a national weapon. Thus the one test of an advanced Nationalist is, in their opinion, one who believes in physical force.”

In conclusion to this study of Connolly’s Republican Socialism, there may be some uncomfortable words for those in vain search of some mythical Connollyite green-tinged Social Democracy that was in some, highly unlikely manner, theoretically different or even antithetical, to Marxism.

James Connolly, the Republican Socialist, the Easter insurrectionist leading Europe’s first Red Army and militant trades unionist, was, of course, an internationally renowned Marxist. Connolly was not averse to using nationalistic language and terminology when stressing the need for national liberation from British imperialism. Indeed Connolly often used overtly religious imagery in his penny pamphlets, to great success but at the core of Connolly’s writings were his acceptance of Marx’s Scientific Socialism and his application of those ideas to the problem’s facing Ireland in his day and throughout its history on the wrack of Colonialism, Genocide, and Imperialism.

James Connolly’s last words on this earth to his wife, following his death penalty by Court Martial for his role in commanding the Easter Rising in 1916, Lillie are transcribed and recorded in the Irish Government’s archives:

Nora told him of the executions of Patrick Pearse, Thomas MacDonagh and others. “He was silent for a while. I think he thought that he was the first to be executed. Then he said, ‘Well, I am glad that I am going with them.’ ”

Nora also told her father about the clamor to have the executions stopped. “I told him that it had been in the papers that there was to be more shootings. ‘England’s promises, Nora, you and I know what that means.’ ”

(These quotes can be found in a witnessed and signed statement by Lillie and Nora Connolly, which is now available online to researchers.)