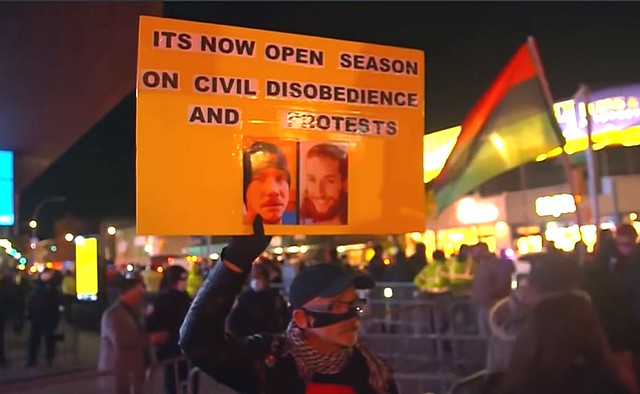 by The Party for Socialism and Liberation
LiberationNews.org
November 22, 2021

The Party for Socialism and Liberation joins with millions of people across the country in expressing our complete outrage at the acquittal of Kyle Rittenhouse on all charges. Once again, the U.S. court system has functioned to protect a racist murderer, who went out into the streets of Kenosha on August 25, 2020 to wage war on people protesting the police shooting of Jacob Blake, a 29-year-old Black man. The verdict is an infuriating reminder of the fundamentally white supremacist nature of the capitalist legal system in the United States.

The acquittal of Rittenhouse has tremendously dangerous ramifications. It effectively hands a license to kill to right-wing vigilantes, who will now feel even more empowered to terrorize people in the name of “law and order.” There is a long and deadly tradition of far right militia-type violence in the United States, and this threat has now been given a huge boost by the state.

The kangaroo court presided over by Judge Bruce Schroeder was a disgrace, and greatly enhanced Rittenhouse’s chances of acquittal by the nearly all-white jury. The process was rigged from the start, and grew more and more absurd with each passing day.

No doubt Rittenhouse was the aggressor

The case presented by Rittenhouse’s lawyers revolved around the claim of self-defense. This narrative was picked up by corporate media outlets in an attempt to prepare public opinion to accept an acquittal, and ridiculously has even bled into some alternative media circles. But an examination of the facts makes it clear that Rittenhouse was the aggressor.

A cell phone video featuring audio of Rittenhouse from two weeks prior to the events of August 25 gives a window into his state of mind at the time. The video zooms in on people leaving a CVS with objects in their hands, presumably participating in the looting of the store. A speaker, who sounds exactly like Rittenhouse, can be heard saying, “Bro, I wish I had my f—— AR right now. I’d be shooting rounds at them.” Despite the prosecution’s attempt to get the video admitted as evidence, the biased judge Schroeder rejected that motion.

Protests against the racist police shooting of Jacob Blake continued on August 25 and were marked by a notable increase in vigilante presence. Rittenhouse traveled to Kenosha from his home in Illinois that day and later at night he went to his friend’s stepfather’s home to retrieve his weapon. He then joined a right-wing militia gathered at a car dealership called Car Source. The owner of the dealership did not ask them to “protect” the location. Rittenhouse had absolutely no reason to be there — he along with his fellow fascist vigilantes went out heavily armed with the intention to terrorize or even kill their political opponents who were rising up against racism. It is ludicrous for a person in that situation to claim “self-defense.”

Rittenhouse picks himself up and runs towards a police line with his hands raised. Bystanders yell, “That’s the shooter! This dude shot someone!” as Rittenhouse walks towards the armored police cars. The police allow the armed teenager to pass through their lines without arresting or even questioning him.

This was emblematic of the police’s friendly attitude towards the far right paramilitaries that had mobilized that night. The Kenosha Police Department conspired with the vigilantes to suppress and intimidate anti-racist protestors. At 9:57 p.m. Kenosha Police Sergeant Adam Jurgens sent a message over the police’s internal message system saying, “If problems arise and those [militia] groups enter into the mix please provide them verbal orders to stand down if we have the resources to handle the calls for service. Very friendly but we need to handle our business in-house as much as possible.”

The concluding phrase “as much as possible” and the qualifier “if we have the resources to handle the calls for service” indicate that the police were considering relying on the militias as an option for “handling” protesters if the situation got out of their control. This perfectly encapsulates the historical role played by white supremacist paramilitaries as an auxiliary to the white supremacist official police forces.

The warm relationship between the police and the vigilantes can be seen in a video where the police offer a group of vigilantes water. At approximately 11:30 p.m., a mine resistant ambush protected vehicle announces itself to the militia, asking if they want water. Rittenhouse, in a distinctive green shirt, white hat and orange med kit, asks the police officers for water. As the officers demand anti-racist protesters leave for violating the curfew, they thank the militia. “We appreciate you guys. We really do,” says the police officer operating the MRAP. The police did not arrest militia members for slashing tires in the area or provocatively pointing weapons at protesters.

One member of the right wing militia told the New York Times (and protesters on the night of August 25) that the police had actually told the vigilantes that they were going to push the anti-racist protesters down the street in their direction. The police deny this, but it is certainly part of the cops’ standard toolkit of repression to engineer provocations of this nature.

Judge rigs the trial in favor of the killer

Even before the trial began it was clear that Judge Schroeder was biased in favor of Rittenhouse. He decided to grant the defense’s request to ban the use of the term “victims” to describe the people who Rittenhouse shot. At the same time, Schroeder denied the prosecution’s request to similarly ban the use of words like “looters,” “rioters” and “arsonists” to describe the same people.

One of the most dramatic (and disgusting) moments of the trial came when Rittenhouse himself took the stand. Widely mocked as being an obviously staged performance, Rittenhouse broke down in “tears” as he recounted and defended his murderous actions that night. The judge lent credibility to this ridiculous spectacle by calling a recess to allow Rittenhouse to compose himself.

The judge permitted highly unusual practices in the courtroom to send a subtle psychological message to the jurors that Rittenhouse did not pose a threat to anyone, feeding into the defense’s racist narrative of a “good kid” caught in a bad situation. One infamous photo shows Rittenhouse peering over just behind the judge’s shoulder as they watch video evidence together — a person on trial for two murders and attempting a third is allowed to hover un-handcuffed a few feet behind the presiding judge! At the conclusion of the trial, slips of paper were drawn out of a raffle drum to determine who the final jurors to deliberate a verdict will be. This task is generally done by a court clerk, but in this case the judge allowed Rittenhouse himself to draw the slips.

On Nov. 11, Judge Schroeder went so far as to order the entire courtroom to applaud for a witness for the defense. When John Black, an Army veteran and “use of force expert” brought into court by Rittenhouse’s lawyers, was testifying, Schroeder asked the courtroom if anyone had served in the armed forces since it was Veterans Day. Only Black identified himself _ after being prompted to do so by Schroeder! — and the courtroom was then told to clap for the man brought by the defense to argue that Rittenhouse was innocent.

Even if a murder conviction was in doubt because of the biased nature of the trial, it seemed completely obvious that Rittenhouse would at the very least be found guilty of illegally possessing a firearm, since he was 17 at the time of the killings and as a minor was not allowed to own or carry his gun. But Schroeder threw out this charge before the jury could even consider it. In an extraordinary move, Schroeder essentially overruled the Wisconsin state legislature and invalidated the entire law in question because of a technicality related to how the language in the statute was written.

No one can honestly say that a Black teenager on trial for multiple murders would have been given the same kind of treatment in any courtroom in America. The strenuous efforts to show Rittenhouse is presumed innocent, the built-in advantages for his lawyers, and favorable media coverage could not be more different from the racist judicial railroading that working class Black youth and others from oppressed communities are routinely the victim of. But Rittenhouse is a white racist vigilante, and therefore entitled to ample protections in the U.S. “justice” system.

Vigilante violence a tool of the ruling class

The U.S. capitalist ruling class has long relied on fascist, white supremacist paramilitary violence at crucial moments to stabilize their system. This goes as far back as the end of the Civil War, when the Ku Klux Klan and similar organizations were used to roll back the radical project of Reconstruction by employing brutal terrorism. In the early 1900s, the Klan was revived to repress growing labor militancy and the struggle for Black freedom. Similar fascist, vigilante violence was allowed, encouraged and organized by the state against the people’s movements of the 1960s and 70s.

More recently, there was a surge in the “militia movement” in the 1990s that culminated with the 1995 Oklahoma City bombing, where an explosive planted by white supremacist paramilitary members killed at least 168 people. Fascist groups received a surge of energy with the election of Donald Trump and later the emergence of far-right anti-vaccine conspiracy theories.

Rittenhouse’s acquittal is a clear signal from the government that vigilantes who kill anti-racist protesters — or any kind of progressive demonstrator — will enjoy impunity. All they have to do is say they feared for their lives and claim self-defense.

But the movement against racism will not be terrorized into passivity. In Kenosha and throughout the country, protesters are now hitting the streets to show that they will not be silenced by this grave affront to justice.

Protests erupt across US over Kyle Rittenhouse verdict

WARNING: This video contains strong language. Demonstrators take to the streets after a jury cleared Kyle Rittenhouse on charges related to his shooting dead two people at an anti-racism protest in Kenosha, Wisconsin, last year. Shouting matches flared on the courthouse steps in the town, and protest marches were held in Portland, Chicago and New York.