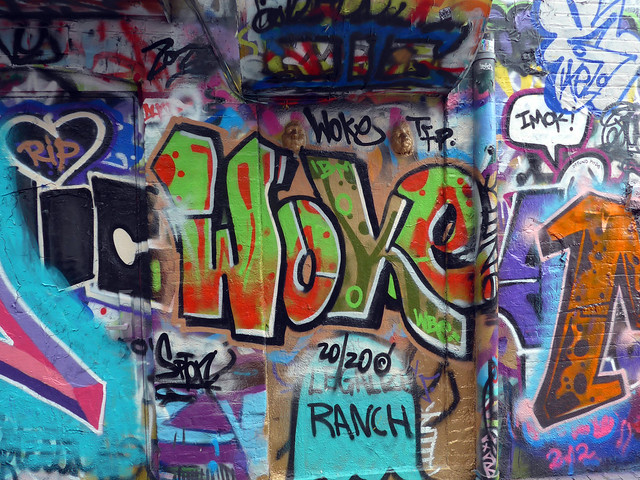 How anyone could believe that “left woke fascism” is actually a thing is staggering. But I have encountered this line of thinking many more times than I am comfortable with lately, primarily among Americans. Sadly, it has become very fashionable in some corners on the internet to bemoan and decry the supposed scourge of leftist “wokeness” and to equate it with the real menace of far-right authoritarianism, violence and brutality. It is a myth that has gained alarming traction.

Without a doubt, the politics of identity have long been used in order to maintain hegemony and neoliberal policies. It is a cynical, but effective, way to distract from issues of class and capitalist exploitation. And it has been used to silence people who may offer a differing point of view by unfairly casting them as racist, sexist, homophobic, etc. But the nonsense of “woke fascism” has been created by far-right ideologues and peddled by grifters like Bari Weiss, Bret Easton Ellis, Jordan Peterson and Glenn Greenwald who rake in tons of money off this ahistorical, erroneous and dangerous rubbish.

“Wokeness” is a new term, but it is derived from the mid 20th century. “Stay woke” was a phrase Black American workers used to encourage attention to civil and labor rights issues. It was later revived by activists in this century. As is the case of all progressive movements under capitalism, the term was co-opted by corporations as well as the police/surveillance/military sector to whitewash real systemic inequities with feel good, empty slogans or lifestyle choices which simply amounted to more profit for their particular brand.

But terms matter. While there are certainly self-described “left-wing” governments that are anti-democratic or even authoritarian, fascism has always been a far-right ideology rooted in the marriage of corporation and state, and maintained through violence, racial/ethnic/religious supremacy, scapegoating of immigrants and other minorities and unfettered nationalism. It is one thing to decry the excesses of political correctness or “cancel culture,” it is quite another to use terms like fascism for these particular societal trends.

It comes down to this: there are no “woke leftist fascists” who are aiming to whisk people off to concentration camps and/or wipe out mass sections of humanity because they fail to use the correct pronoun. There are, however, real fascists who would like nothing less than doing this to the people they view as genetically, culturally or religiously inferior to them and a threat to the traditional power arrangement in society. There are real fascists who dream of dropping leftists into the ocean as they did in Pinochet’s Chile. The song “Start up the Rotors” by Polish singer Kel’Thuz fantasizes about this openly and is shared widely by far right trolls on the internet. And one other recent instance is a chilling reminder of this. Following the Rittenhouse verdict, a member of the notorious Proud Boys expressed online: “The left wont stop until their bodie(s) get stacked up like cord wood.”

And yet I’ve seen an argument being used that attempts to equate mean tweets, “canceling” or even threats by a few left-identifying people on Twitter or Facebook as being evidence for “woke” or “leftist fascism.” While any kind of bullying, doxing or censorship of ideas should be condemned, these incidents do not amount to anything remotely fascist in nature.

The terrifying reality is that right now actual fascism is gaining ground. It has manifested itself in the laws that make it more and more difficult by the day for people of color and the urban poor to vote or organize. Laws that criminalize protest and grant impunity to people who plow down demonstrators with their cars. Laws that give people the right to become bounty hunters on women and those who assist them with access to a safe abortion. Lawmakers and police who openly cavort with white supremacist militias. Lawmakers who dismiss or even assist an attempted coup. Lawmakers who threaten other lawmakers with violence, rape or death. Lawmakers who deny science and ignore public safety in favor of the fossil fuel industry, corporate profit or the gun lobby. Lawmakers who pose with their family carrying assault rifles for a tweet in the immediate aftermath of yet another horrific mass shooting. These aren’t some trolls on the internet. They are elected officials and public servants.

American fascism resembles other fascistic societies, but it inhabits its own, unique sphere in history. It is the wealthiest and most powerful empire the world has ever known. And there is no indication that this will change in any way of significance any time soon. To ignore or downplay the real rise of fascism in this context or be a handmaiden to its growth is not only the height of foolishness. It invites a kind of horror words could not begin to describe.

4 thoughts on “The Dangerous Myth of “Left Woke Fascism,” by Kenn Orphan”