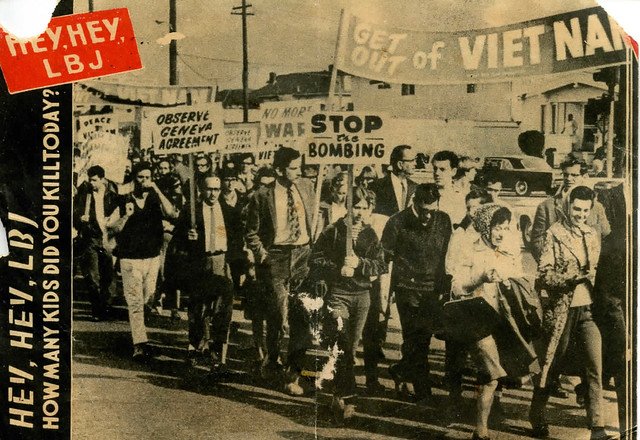 On the show, Chris Hedges discusses political violence with Mark Rudd, author, and former leader of Students for a Democratic Society (SDS).

The Weather Underground, a clandestine revolutionary organization that carried out a wave of bombings in the 1970s, was seen by my father and other clergy members who were involved in Vietnam anti-war protests as one of the most self-destructive forces on the left.

These members of the clergy, many of whom, including my father, were World War II veterans, often became ministers because of their experiences in the war. They understood the poison of violence. One of the most prominent leaders of Clergy and Laymen Concerned About Vietnam (CALCAV), to which my father belonged, was the Catholic priest Philip Berrigan, who was a highly decorated Army second lieutenant who fought in the Battle of the Bulge.

The young radicals of the Vietnam era, including Mark Rudd – who in 1968, as a leader of SDS, led the occupation of five buildings at Columbia University and later helped form the Weather Underground – did not turn to those on the religious left whose personal experiences with violence might have saved SDS, the Weather Underground and the student anti-war movement from self-immolation. Blinded by hubris, intoxicated by the lust for violence and hypermasculinity and infected with the disease of moral purity, the leaders of the Weather Underground destroyed the largest anti-war movement in the country. It was, perhaps, the single most important blow to the left since the witch hunts led by Senator Joe McCarthy.

The leaders of the Weather Underground dismissed the nonviolent left as useless cowards, claiming they were the only true revolutionaries. They embarked, as have many of those in today’s black bloc and antifa, on a campaign that proved to be counterproductive to the social and economic goals they said they advocated.

Rudd, 50 years later, plays the role once played by clerics Phil and Daniel Berrigan, Martin Luther King and Rabbi Abraham Heschel. His book, Underground: My Life with SDS and the Weathermen, is a brutally honest deconstruction of the dangerous myths that captivated him as a young man. I suspect that many of those in the black bloc and antifa will no more listen to his wisdom than did the young radicals five decades ago who dismissed the warnings from those on the religious left for whom violence was also not an abstraction. Rudd sees his old self in the masked faces of the black bloc and antifa, who advocate violence and property destruction in the name of anti-fascism. These faces, he said, ignite in him deep embers of “shame and guilt.”

Mark Rudd’s memoir is Underground: My Life With SDS and the Weatherman (pdf).

Journey Through Snow and Dreams, an excerpt from The Crown of Light, by Rivera Sun

Bill Ayers: Americans must rise up against war + Life in a bubble will explode in America’s face