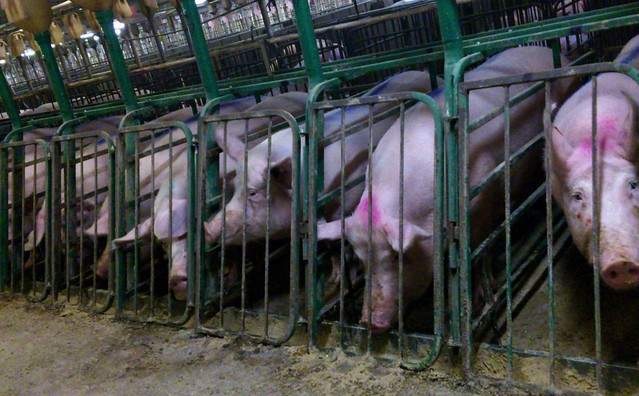 The huge industrial slaughterhouses in the United States transport overcrowded animals, smeared with their own urine and feces, in trucks over long distances without water or ventilation in the summer or heat in the winter.

Many animals arrive dead, sometime frozen to the sides of the trucks where a chain has to be wrapped around them to pry them loose. They are tossed onto a pile of other animal carcasses. Animals barely able to walk from the trucks into the chute to be slaughtered are beaten to death with a lead pipe. The killing is done so quickly—200 to 400 cattle can be killed in an hour or 3,000 to 5,000 per day—that when animals are skinned they are sometimes still alive, forcing workers to thrust a knife into the head to sever its spinal cord.

Slaughterhouse work is also some of the most hazardous in the country, with 36 percent of workers incurring serious injuries. Those who are disabled, losing fingers and even limbs in the machinery used to kill the animals, are usually fired and replaced by undocumented workers who have neither job protection or legal recourse.

On top of this, the federal inspection system and enforcement to prevent contaminated meat from being sold to the public has been gutted, essentially permitting the meat industry to regulate itself. This has resulted in numerous E. coli and salmonella outbreaks among meat consumers.

Gail Eisnitz is the author of Slaughterhouse: The Shocking Story of Greed, Neglect, and Inhumane Treatment Inside the U.S. Meat Industry.

10 thoughts on “Chris Hedges: Slaughterhouse: The Shocking Story of Greed, Neglect, and Inhumane Treatment Inside the U.S. Meat Industry”