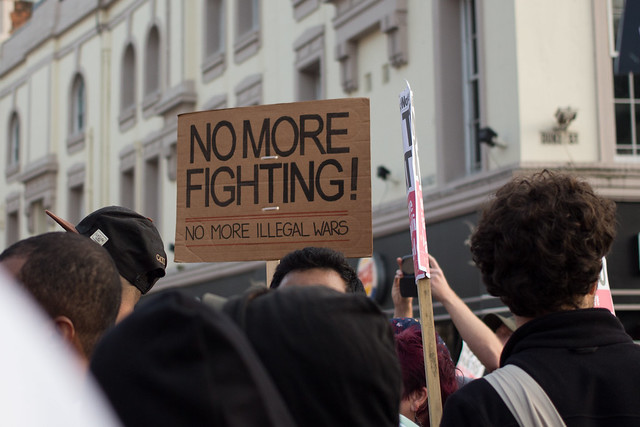 The world is realizing the price for American hegemony and vanity is criminally insane as the Ukraine debacle demonstrates amply.

This is precisely what Washington fears most: cracks appearing in its presumed leadership of European allies. The U.S.-led pressure campaign against Russia over Ukraine has been dangerously stoked up to the hilt to the point where a catastrophic war in Europe could be ignited.

And the Europeans are getting nervous about Uncle Sam’s recklessness. Nerves are fraying and with that, the hallowed “unity” – meaning U.S. hegemony – is coming undone.

German Chancellor Olaf Scholz hosted French President Emmanuel Macron in Berlin this week where both leaders called for European dialogue with Russia to deescalate the Ukraine crisis. Their announcement was a veiled repudiation of Washington’s confrontational stance towards Moscow.

Media reports say France and Germany are alarmed by Washington’s characterization of “imminent” war in Ukraine from an alleged Russian military invasion. Moscow has repeatedly and vehemently denied it has any invasion plans or plans to attack anyone. Somebody is lying and as each day passes without an invasion by Russia materializing the questions turn to Washington and what its agenda is.

There is growing wariness the Americans are pushing the tensions to a dangerous degree that is out of proportion to diplomatic efforts. Even the Americans don’t seem to understand their own suicidal tendency.

Notably, too, Berlin has refused to consider endorsing the American and British idea of imposing more extreme economic sanctions on Russia, such as cancelling the Nord Stream 2 gas pipeline or removing Russia from international banking mechanisms. The latter move would harm Europe as much as Russia.

The Scholz administration has also held steadfast against supplying NATO weapons to Ukraine.

Meanwhile, the Biden administration and NATO chief Jens Stoltenberg have been “working overtime” to project an image of unity among the U.S. and its European allies. That intense effort speaks of the tacit anxiety that the transatlantic alliance is not as robust or unified as is being projected. The anxiety is particularly acute for Washington because its position of dominance over European allies depends on its unquestioned authority.

President Biden claims he has spoken to every NATO ally and “we’re all on the same page” with regard to the situation in Ukraine and tensions with Russia. Biden asserts this week that there is “total unanimity” among the U.S. and its allies. The American president’s assertion is more wishful thinking than reality. There is not unanimity, as the French and German leaders are indicating.

An unlikely slap in the face came from the Kiev regime in Ukraine. Its president, Vladimir Zelensky, as well as other senior defense officials did a U-turn this week when they rebutted the U.S. claims that a Russian invasion was imminent. Kiev was rankled by Washington and London’s decision to pull out diplomatic staff from their embassies. Those moves were seen as alarmist and causing undue instability.

Evidently, the Americans and their ever-servile British patsy are going too far in fomenting tensions over Ukraine. Even the normally Russophobic Kiev regime has become concerned that Washington and London are precipitating an armed conflict with Russia.

More cracks undermining the U.S. leadership came from Croatian President Zoran Milanovic whose country is a member of NATO. He condemned the escalation in tensions and said Croatia would not take part in any conflict. He said: “If there is an escalation, we will withdraw everyone to the last Croatian military.”

Presciently, the Croatian president commented on the impasse: “It has nothing to do with Ukraine or Russia, it has to do with the dynamics of the U.S.’ domestic policy.”

Still another blow to the overwrought American leadership was the resignation of the German top naval commander, Vice Admiral Kay-Achim Schoenbach, after he labelled the U.S. claims of a Russian invasion of Ukraine as “nonsense”. Washington was apoplectic at the German snub to its presumed authority.

The crisis over Ukraine has taken on a madcap rush to the abyss of all-out war against Russia. President Biden even remarked grimly this week that such a war “would change the world”. That’s a clueless understatement; it would probably end the world given the nuclear powers involved.

Nevertheless, there are logical, if reprehensible, political motives behind the irrational slide towards disaster.

First of all, there is the historic American strategic objective of sabotaging energy and other normal trade between Europe and Russia. Washington’s Cold War strategy of thwarting any normalization of relations between Western Europe and Russia is as active today as it ever was during the past eight decades since the end of World War II. A particular prize for Washington is to displace Russia as the premier gas and oil supplier to Europe with its own hydrocarbons and in that way prop up the petrodollar system which in turn is crucial for preserving the U.S. dollar as a universal currency.

Having the U.S.-led NATO bloc on military alert is also a critical boon for the American weapons industry that is the beating heart of dysfunctional U.S. capitalism.

But there are also shorter-term petty political reasons for why Ukraine and Russia have blown up into such a crucible in recent months.

An Associated Press report this week revealed more than intended with the headline: “Biden’s big test… Proving he can rally allies against Putin.”

The AP report states the U.S. president is facing a “major test of the twin pillars of Biden’s 2020 candidacy that he could get things done competently at home and restore America’s standing in the world after Donald Trump’s volatile four years in the White House.”

When newly inaugurated President Biden crowed about “America is back” what he yearned for was to be able to show American voters that under his watch Uncle Sam was once again respected around the world.

Biden’s domestic promises have so far turned decidedly pear-shaped and his poll ratings are languishing from failure to revamp U.S. society. All the more then that this lame-duck president is trying to salvage his image as a strong leader among allies towards cut-out foreign enemies like Russia.

The crisis in Ukraine is being driven by systematic failure in U.S. politics and its bankrupt oligarchic capitalist economy. Some of that is strategic as in Cold War-style objectives. Some of it is down to petty domestic politics. The world is being pushed to a dangerous precipice in order to satisfy American political needs.

Fatally for the U.S. empire, however, there is a palpable sense that the world is realizing the price for American hegemony and vanity is criminally insane as the Ukraine debacle demonstrates amply. Hence the cracks are opening up under Uncle Sam’s fragile grip on both leadership and reality.

American imperial propagandists will argue that the splintering in transatlantic unity is just what Moscow has been seeking. Perhaps that is so. But the primary cause is due to Washington’s own inherent failing power and its hegemonic mania.

8 thoughts on “Cracks Open Up In America’s Fragile Leadership Over Ukraine Crisis, by Finian Cunningham”