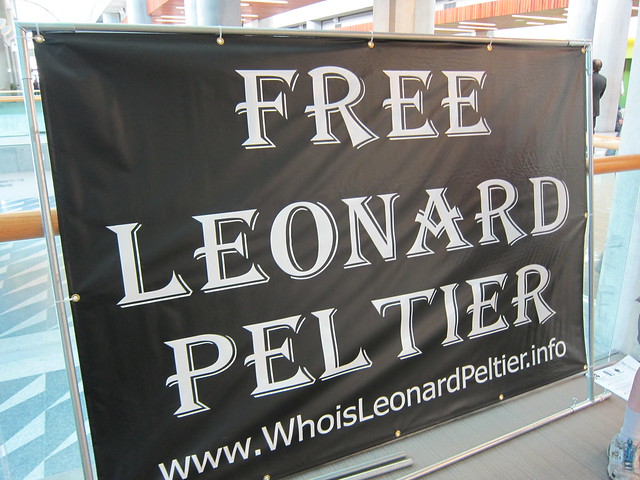 On the show, Chris Hedges discusses the Leonard Peltier case with Kevin Sharp, a former federal judge, and one of Peltier’s lawyers.

Leonard Peltier, a leader in the American Indian Movement, now 78 years old, is America’s longest serving political prisoner. He has been in prison for 44 years charged with the murder of two FBI agents during a gun battle in 1975 on the Pine Ridge Reservation.

Peltier in his memoir Prison Writings: My Life Is My Sun Dance said he participated in the shootout with the FBI agents but insists he did not kill them. His two co-defendants were acquitted based on self-defense. The FBI at the time of his trial was determined that Peltier would be found guilty.

Peltier’s trial was riddled with inconsistencies and the withholding of exculpatory evidence. The FBI, it was later learned, threatened, and coerced witnesses to lie and used these false statements to convict Peltier. Most jurists who have examined the case consider the trial deeply flawed.

James Reynolds, who was the U.S. attorney who helped put Peltier in prison in the 1970s, has written a letter to President Joe Biden decrying the unfairness of Peltier’s trial and asked the president to grant Peltier clemency. “I write today from a position rare for a former prosecutor: to beseech you to commute the sentence of a man who I helped put behind bars,” Reynolds wrote to the president. “With time, and the benefit of hindsight, I have realized that the prosecution and continued incarceration of Mr. Peltier was and is unjust. We were not able to prove that Mr. Peltier personally committed any offense on the Pine Ridge Reservation.” He added that granting clemency would help mend “the broken relationship” between Native Americans and the U.S. government. “I urge you,” he wrote, “to take a step towards healing a wound that I had a part in making.”

Peltier, who is in a Florida prison and who became eligible for parole in 1993, is in very poor health. If Peltier is not released soon, he will die in prison serving his two life sentences.

6 thoughts on “Chris Hedges: The Framing of Leonard Peltier”