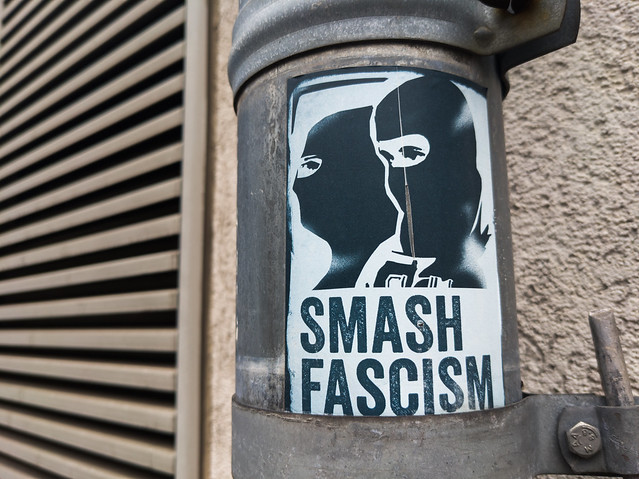 This past weekend, I attended a rally in my home city of Halifax. It was organized to counter the so-called “Freedom Convoy” which continues to hold cities hostage around Canada. Our gathering was intended to build solidarity and care for community. It was encouraging to see so many people come out to oppose fascism. I only wish more showed up.

Even though the other side is a minority in Canada, there were still many who came out to support the “Freedom Convoy.” They not only convened in parks. They were everywhere. In all honesty, I haven’t felt that uneasy since I lived in the States. Trucks with enormous Canadian flags drove down every street blaring their horns which, for some of the vehicles, was deafening.

I had already known that organizers of this convoy had a history of white supremacy and far-right ideologies. However, being present amongst them, it became very clear to this was not a movement, but a mob. The tactics they used were classic fascist bullying. Most didn’t care if people supported them or their cause or were interested in learning more. And most seemed more interested in intimidating people. What was also striking to me is how the authorities were friendly with many of them. I saw some of them chatting with them in a familiar and friendly manner. I’ve never seen that kind of thing happen at any of the protests I’ve attended that were anti-capitalist, against ecocide, antiwar or for Indigenous rights.

One thing I witnessed really disturbed me. An old man stood in the Grand Parade amongst the Convoy protesters silently holding a sign that read “support healthcare workers, go home.” He wasn’t shouting or getting in anyone’s face. But he was approached by several people who took a menacing stance toward him. One man approached him with his pit bull straining at the leash. The old man retreated. But the imagery had historic resonances that were undeniable.

The far-right has no answers to our problems except fear and the threat of violence. It thrives on the “us vs. them” or “good vs. evil” narrative because otherizing is so much easier than building community care and fostering solidarity between people.

Like the attempted coup in Washington a year ago, this Convoy has inspired similar far-right uprisings in Europe and elsewhere. And it seems evident that this is not going away anytime soon. If history has taught us anything, it is that fascism must be met with strong and unwavering opposition everywhere and every time it surfaces.

We cannot afford to think “oh this is Canada, not the States. It would never happen here.” Because the seed of fascism exists in every human society. And it only needs a combination of circumstances to explode into a raging fire. And if that fire isn’t contained at the start, it has the power to grow quickly and burn the entire house down before anyone can stop it.

Thoughts on the “Freedom Convoy” in Ottawa, by Kenn Orphan

14 thoughts on “Fascism is a Fire that Will Burn the Entire House Down, by Kenn Orphan”