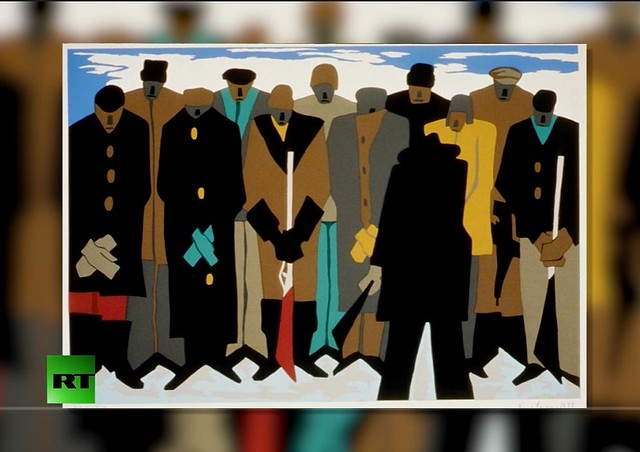 On the show, Chris Hedges discusses the novel Cloudsplitter and John Brown with the author Russell Banks.

The painter Jacob Lawrence in his 22-piece series The Legend of John Brown, first exhibited in 1941, chronicles in each of his panels a seminal stage in the life of the abolitionist John Brown. The first panel depicts Brown as Christ nailed to a cross, blood flowing from his nailed feet to the ground.

The next scenes portray Brown as a man of exceptional religious conviction, willing to suffer financial failure and hardship in his fight for abolition. The middle compositions tell the story of Brown’s plans to free slaves, including his raids that massacred pro-slavery settlers in Kansas, his failed attack on the U.S. arsenal at Harper’s Ferry, Virginia, and the final panels portray his capture, with his head bent, covered by long hair, and holding a cross, his sentencing and his hanging.

Brown’s religious zeal and martyrdom became a catalyst to the bloody civil war that followed. Brown remains one of the most enigmatic figures in American history, a bundle of contradictions, a man of rigid morality and high ideals who at the same time could kill those who supported slavery with unmitigated savagery. To many Blacks he is a hero, indeed Malcolm X said Brown was the only white man he respected, while whites often dismiss him as at best misguided or insane.

W.E.B. Du Bois, in a speech at Harpers Ferry in 1932 to honor Brown, was aware of his ambiguities. He said:

“Some people have the idea that crucifixion consists in the punishment of an innocent man. The essence of crucifixion is that men are killing a criminal, that men have got to kill him … and yet that the act of crucifying him is the salvation of the world. John Brown broke the law; he killed human beings… Those people who defended slavery had to execute John Brown although they knew that in killing him they were committing the greater crime. It is out of that human paradox that there comes crucifixion.”

Few have captured the paradox of John Brown better than Russell Banks in his monumental novel Cloudsplitter, one of our greatest works of contemporary fiction.

Listen to the video on RT as RT America on Youtube has removed the video or on Portable.TV.

Chris Hedges and Russell Banks: Foregone: The Power of Fiction