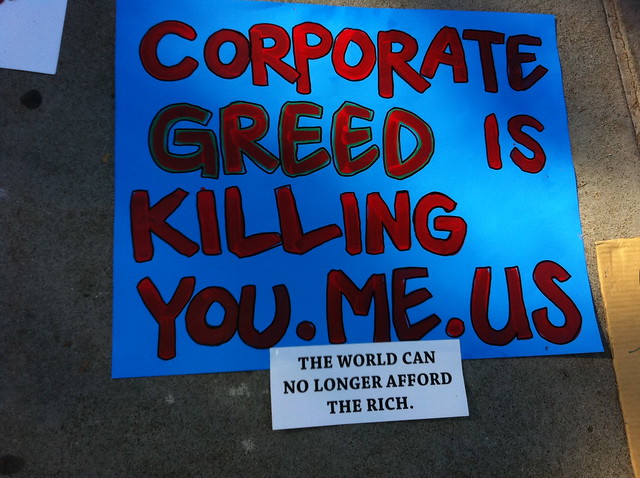 The biggest business in America is stealing and defrauding the federal government, Uncle Sam and you the taxpayers. In terms of sheer stolen dollars, the total amount is greater than the annual sales of Amazon and Walmart over the past two years.

Before getting to the real big stuff, start with how much was stolen or not delivered by the contractors in Iraq and Afghanistan. Just in one program, John Sopko—Special Inspector General for Afghan Reconstruction (SIGAR), estimated that $30 billion of the $100 billion repairs project was purloined. Despite his many damning reports on what was also wasted—like the $40 million natural gas-powered fueling station (there were no natural gas-powered cars in Afghanistan)—no one was indicted, no one was fired, no one missed a promotion. This is according to author Andrew Cockburn, who interviewed Sopko extensively for his new book The Spoils of War: Power, Profit and the American War Machine. In fact, Cockburn writes: “They were giving bonuses to people for stealing our money.”

Of the $360 billion in annual billing fraud by the health care industry, over $100 billion is fraud on Medicare and Medicaid.

Turning to the $6 trillion appropriated (without reversing the tax cuts by Trump on the super-rich) by both Trump and Biden since March 2020, government investigators and the media are seeing staggering thefts and frauds. Money was stolen outright by fake companies and fraudulent applications, or taken by profitable companies, law firms and others that these programs were never intended to benefit.

One estimate has the trillion dollar Paycheck Protection Program delivering only 25 percent to the people for whom it was intended. Even people like the notorious anti-taxer Grover Norquist, who is loaded with corporate donations, applied for and got a bundle of tax dollars.

From the beginning I called members of Congress to caution them to draft very tight language in the giant rescue and infrastructure programs in order to foresee and forestall the predictable giant heist. There were some provisions—expanding enforcement budgets and inserting certain general review obligations on government agencies. But it was massively too little and too late— and utterly inadequate for the volume of coming robberies.

Corporate lobbyists were already swarming over Capitol Hill to get their bailouts, grants, sweetheart contracts and other benefits. The airlines got about $50 billion in bailouts, for example, after they had bought back $45 billion of their own stock from passenger revenues.

The mass media was also largely inattentive, spending far more time on the friction between politicians in Congress than the burning of taxpayer dollars. The Inspectors General attached to each federal agency were timid, under-budgeted and had weak authority. Moreover, several Inspectors General positions were vacant.

Professor Malcolm Sparrow at Harvard has shown how there are specific, proven ways to prevent thefts and frauds on government programs. Effective criminal law enforcement authority, adequate enforcement budgets and plenty of investigators and auditors with higher level political support are crucial.

Neither Congress nor the White House have met this challenge of titanic corruption which should become a major campaign subject in the coming elections. Apart from a few perfunctory hearings, Congress has not held the high profile intense hearings that grab public attention—in part because both Parties have culpability, though the GOP is worse.

Biden spoke briefly this month about this thievery in his State of the Union address and promised a chief prosecutor for pandemic fraud. This is a little late. And where was the mention of adequate budget and authority? Professor Sparrow recommends that the enforcement budgets for commercial crimes have to be at least one percent of the estimated theft/fraud. The Biden oversight isn’t a tenth of that measure.

Finally, The Washington Post and The New York Times have started to investigate. The findings of their lengthy features are predictably staggering, especially regarding the Small Business Administration (SBA) which dispatched $343 billion in PPP loans over a 14 day period!

As recounted in the NY Times article by David Farenthold, a free for all robbery spree took hold. The SBA made classic, foreseeable blunders. First, it subcontracted out, without due diligence, to so-called nonprofits, the job of distributing and monitoring the expenditures, giving them 15 percent of the overall disbursements to, for example, children feeding programs. The blunder not only is an inappropriate delegation of governmental powers, but it also creates a perverse incentive for the overseer to shovel out money to subcontractors.

Biden’s Department of Agriculture arrogantly turned down Farenthold’s request to interview officials there. This is another sign of unpreparedness, enabled by a Congress that astonishingly let the Department “waive rules that had been put in place after previous scandals to make sure states watched the watchdogs,” wrote Farenthold. (See “F.B.I. Sees ‘Massive Fraud’ in Groups’ Food Programs for Needy Children”.)

A longer expose appeared in The Washington Post by Tony Romm with the headline “Immense Fraud’ Creates Immense Task for Washington As It Tries to Tighten Scrutiny of $6 Trillion in Emergency Coronavirus Spending”.

Romm’s examples are about sheer theft. A person pleaded guilty who somehow got $4 million and spent chunks of it buying a Porsche, a Mercedes and a BMW. A man was sentenced to prison for obtaining $800,000 for a business that did not exist. Fake or shell companies getting grants and unpayable loans illustrate that the guardrails were non-existent in thousands of cases.

So minimal are the prosecutorial initiatives that the commercial criminals are still actively seeking huge sums in grants, loans, direct payments and other forms of emergency assistance.

The SBA’s diligent Inspector General, Hannibal “Mike” Ware, has been producing report after report, incurring the hatred of Trump and his then-SBA Administrator, and still not convincing Congress that without more enforcement funds, the corporate crime wave will prosper unabated. Even so, Romm points to evidence that dozens of criminal fraud cases were preventable with some more diligence from the SBA. It isn’t reassuring that Romm reported that SBA officials turned down interview requests by the Post.

Recent efforts by a long-culpable Congress and a long-neglectful Presidency are not close to catching up with current robberies, not to mention any chance of retrieving stolen monies. Ever since I requested in 1971 that President Richard Nixon set up a commission on corporate crime, the federal government has remained obstinately indifferent to the sheer scale of ‘crime in the suites.” Consider the looted military contracting budget and the global level of corporate tax evasions up against the tepid responses from Washington. Too much discretion was delegated to the state and local governments without strict criteria. One New York Republican-controlled municipality is about to spend $12 million to renovate a baseball stadium.

Without a tradition of Congress requiring annual compliance reports from federal agencies, which would require securing regular data feedback flows, the government will continue to be caught flat-footed.

Why should the three working days a week Congress, with no skin in the game, really care? If it isn’t the unorganized taxpayers paying for these massive thefts, the next generation of Americans will get the tab. Especially since the solons on Capitol Hill have refused to rescind the huge Trump tax escapes for the wealthy and giant corporations that have ballooned the federal deficit.

Chris Hedges and Richard Wolff: The Precarious State of the US Economy

Chris Hedges: The Spoils of War – Power, Profit and the American War Machine

Michael Hudson: Biden Between BlackRock and a Hard Place