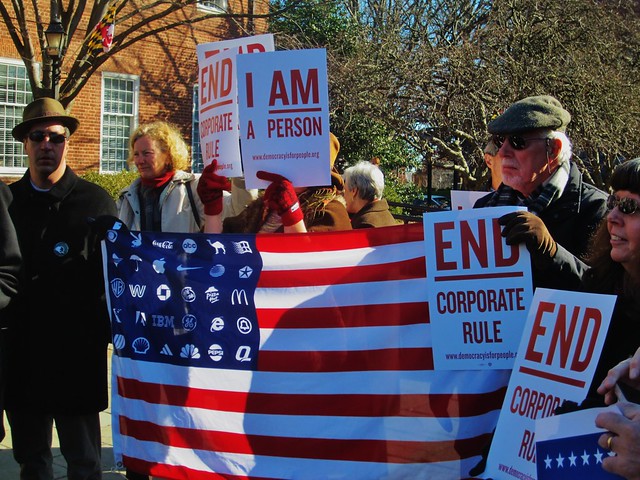 It happened so subtly, we missed the corporate coup. Like shadows, corporations surrounded our country and slowly strangled it. They crept into Congress, the White House, the Supreme Court, the FDA, the military, the Department of the Interior: everywhere you look, a corporation controls the decisions of this nation. We have become the occupied territory of brand names, corporate logos, monopolistic power, and corporate greed.

It would be easier to understand what has happened if they wore red armbands and goose-stepped. But no, the minions of corporate power wear false smiles, carry empty promises, and fly in private jets. The less-powerful rank-and-file of the corporate state look like our neighbors, relatives, friends. They are not our enemy. It is the destructive behaviors of the corporate state, and its occupation of our government, culture, and society that we must rebel against.

Every aspect of our lives has become an extraction zone for the insatiable hunger of corporate greed. They take our labor, sweat, and time. They steal our work, ideas, inventions, even thoughts. Their extortionist prices devour our earnings. They supplant our culture with theirs. They replace education with corporate programming. They broadcast propaganda and advertisements instead of news. They pass policies and legislation that maximize profits instead of protecting people and planet. They privatize the public assets built by collective investment. They take the resources of the land and dump the costs of destruction onto future generations. They tax our earnings to fund police and military that guard their interests. They suck up our life savings through health costs that come from the toxic side effects of their greed.

The corporate state gives us back mere illusions of freedom. Behind the smoke and mirrors, empty rhetoric and false words, lies a clenching fist of control. The moment you step out of line or dare to dissent, you run smack into the invisible electric fences of their laws and police. If you stay within their boundaries, they reward you by allowing you to think you have consumer choices. Each option funds their stockpiles of wealth, but you’re permitted to fantasize that you can vote with your dollars for the lesser of two evils.

We are occupied territory from sea to shining sea, from urban to rural region, from our outer edges to our inner souls. The corporate state extracts profits from every angle of our lives. To win independence requires inner, outer, and utter revolution. It demands that we put the tools of nonviolent struggle to work toward changing every aspect of our lives – social, economic, political, spiritual, cultural, mental. If we wish to end the occupation of the corporate state, we must turn our lives inside out and upside down until they serve us, and not the other way around.

Rise up. Rebel. Throw the occupiers out.

The Man From the North is a fictional writer in Rivera Sun’s novel, The Dandelion Insurrection and the sequels, The Roots of Resistance, and Winds of Change. The novel takes place in the near future, in “a time that looms around the corner of today”, when a rising police state controlled by the corporate-political elite have plunged the nation into the grip of a hidden dictatorship. In spite of severe surveillance and repression, the Man From the North’s banned articles circulate through the American populace, reporting on resistance and fomenting nonviolent revolution. This article is one of a series written by The Man From the North, which are not included in the novel, but can be read here.

7 thoughts on “End the Occupation of the Corporate State, by The Man From the North”