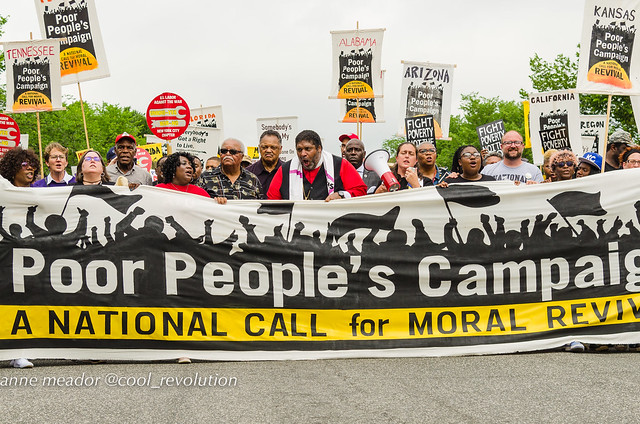 Everyone should get in the streets of Washington DC for the event planned by the Poor People’s Campaign on June 18 — if not sooner.

In a normal country, the streets would long since have been packed, government offices surrounded, public squares occupied, and change demanded. The U.S. — and the world with it — is suffering severely from unrepresentative government, the hoarding of wealth by a tiny group of overlords, the devastation of the Earth’s climate and ecosystems, the normalization of violence and massive warmaking and the risk of nuclear apocalypse, and the spread of all kinds of racist hatred and bigotry.

People have been conditioned to suppose that the proper response to this is to spend several months chattering about how they’re going to vote, and then take 5 minutes to vote for either an outright fascist or a completely unprincipled facilitator of maintaining a steady pace toward the approaching cliff — one or the other of whom has already been guaranteed victory by gerrymandering.

This absurd learned helplessness is actually modeled for people by the poor wittle Democrats who only have the White House and a majority in both houses of the Congress but prefer not to defy their funders.

Of all the lies told to us, powerlessness is the worst, the most unrelenting, the most effective, and the most damaging. If anyone is willing to ask anyone else to get off their ass even for a minute for any set of more-or-less good causes, they damn well ought to be encouraged. Any shortcomings of event organizers ought not to matter, both because we need a movement much larger than any individuals can lead, and because we’re up against the horrors of a sociopathic system that appears to run on dollars but is principally fueled by our own voluntary disempowerment.

A while back the Poor People’s Campaign sent around an email supporting unlimited spending on weapons for Ukraine. When some of us objected, the response was various peaceful statements, but never any opposition to sending weapons to Ukraine. I’m not for an instant suggesting that isn’t disgusting. I’m not proposing that anyone accept a Progressive-Except-For-Peace agenda. I’m proposing that we have war, oligarchy, bigotry, and many other problems to tackle, and that if anyone will attempt direct nonviolent creative action on any of them, we ought to be there. In fact the Poor People’s Campaign usually, if not always consistently, proposes to tackle all of the interlocking evils we’re up against. And that’s the best that’s ever seen in this corner of the globe.

Why are you still sitting there?

As Calls For Unions Grow, It is Worth Revisiting the Words of Martin Luther King, Jr., by Kenn Orphan

4 thoughts on “Turn Out for the Poor People’s Campaign, Regardless of Its Shortcomings, by David Swanson”