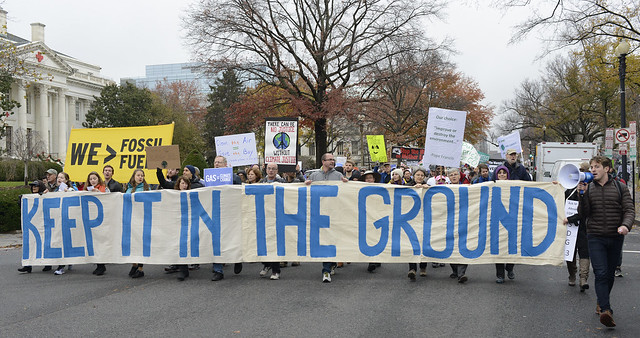 The U.S. government and all the corporations that profit from fossil fuels are cherry picking the actions that they are taking in response to the global climate emergency. Everything that they are pursuing is potentially profitable, and they are paying less attention to reforestation, wind power, solar power or other alternative energy sources.

As they have done and are continuing to do during the COVID pandemic, they treat the climate crisis as if the United States is the only country enduring the consequences.

The whole scenario raises the question of how, in spite of divergent interests among the rich and powerful, they could have reached this consensus of inaction and callous disregard. The world is on fire and they aren’t even looking for a fire extinguisher.

The poorest populations are suffering the worst disasters when extreme weather created by CO2, methane and other pollutants hit their homes.

In 1984, Congress demanded the presence of top tobacco executives to answer for the lies they had been telling for decades about the harm of tobacco use. The hearings were a big deal, covered by the national media before and after, and tobacco CEOs’ lies to Congress made headlines and were talked about for years.

Not that it did that much good, but contrast that to what was supposed to be a similar hearing – this time with top energy company executives, to answer for misinformation about climate change that they’ve been funding through phony think tanks.

The October 2021 hearing was held electronically because of the pandemic. The CEOs didn’t even bother to join it. They had lower-level flunkies answer questions, and the news media barely covered the events.

The way that they brushed off Congress with barely a second thought was a clear demonstration of the hierarchy. Capitalist government works for corporations – not the other way around. Any events that hint at another relationship in which giant corporations have to answer to the government are theater.

A May 11, 2022, article in the Guardian revealed something that even further elucidates their power. It turns out that despite claims by the major oil companies that they are going green, they are in fact expanding as never before. The article revealed:

Here are some of the events happening now that are caused by energy corporation criminals:

The Colorado River is in an unprecedented crisis. Warming and drying weather for decades has led to a drought that has broken records that go back 1,200 years. Water levels at Lake Mead, Lake Oroville, Lake Powell and dozens of other lakes are all at the lowest point ever recorded.

The river and its tributaries supply water to more than 40 million people and 3 million acres of crops. Hundreds of hydroelectric power generators electrify most of the southwest and are closer to their breaking point than ever before.

In northwestern India and in Pakistan a heatwave hit in the latter part of April and beginning of May, and is projected to return at the end of May. The heat was so bad that schools closed, crops were damaged, and there were power outages. A deadly cholera outbreak has infected thousands and killed people because of lack of access to clean drinking water.

A study by the British national meteorological service concluded that without the impact of climate change, a heatwave such as this might occur once every 312 years. But the frequency is now likely to be every 3.1 years – roughly 100 times more frequent. By the end of the century their frequency will be about once per year.

This is similar to what has been forecast recently for Baghdad, Iraq. Many experts question whether such heat is fit for human survival.

After torrential rains destroyed hundreds of homes and killed 435 people in the impoverished KwaZulu-Natal province of South Africa last month, flooding is happening again. Hundreds had to flee their dwellings in late May.

KwaZulu-Natal Premier Sihle Zikalala told Al Jazeera reporters, “Some areas are inaccessible and have become islands at this stage.”

In Bangladesh and parts of northeastern India, flooding in hundreds of villages has stranded 2 million people, including many children. The region is impoverished and because of lack of mobility, starvation is actually a concern.

The biggest obstacle to curtailing rising atmospheric temperatures is capitalism. But it isn’t just the rise of industrial capitalism that Biden & Co. can blame on the system’s earlier phases. The hyper-militarism of the U.S. imperialist era has exacerbated the global crisis.

That isn’t only because of the emissions spewed during the manufacture of the machinery of war – although the Pentagon itself emits more than the economies of 46 entire countries. But the plunder of the global south made possible by murderous warfare has left much of the world more vulnerable to extreme weather.

No one is safe from hurricanes, floods, rising sea levels or extreme heat. But when poverty is added to the equation, climate change is much more deadly for the world’s poorest populations.

Congressional hearings are nothing more than an attempt to rescue the reputation of the Biden administration that has come nowhere near being the champion of saving the planet that it promised during the 2020 election campaign and the early months of the administration.

The transition to a non-fossil-fuel world has to be run by the people. The oil barons that are knowingly destroying our planet belong in jail for the rest of their lives.