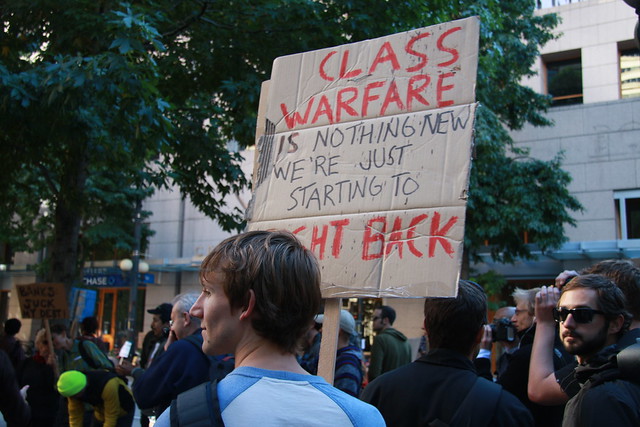 To Wall Street and its backers, the solution to any price inflation is to reduce wages and public social spending. The orthodox way to do this is to push the economy into recession in order to reduce hiring. Rising unemployment will oblige labor to compete for jobs that pay less and less as the economy slows.

This class-war doctrine is the prime directive of neoliberal economics. It is the tunnel vision of corporate managers and the One Percent. The Federal Reserve and IMF are its most prestigious lobbyists. Along with Janet Yellen at the Treasury, public discussion of today’s inflation is framed in a way that avoids blaming the 8.2 percent rise in consumer prices on the Biden Administration’s New Cold War sanctions on Russian oil, gas and agriculture, or on oil companies and other sectors using these sanctions as an excuse to charge monopoly prices as if America has not continued to buy Russian diesel oil, as if fracking has picked up and corn is not being turned into biofuel. There has been no disruption in supply. We are simply dealing with monopoly rent by the oil companies using the anti-Russian sanctions as an excuse that an oil shortage will soon develop for the United States and indeed for the entire world economy.

Covid’s shutdown of the U.S. and foreign economies and foreign trade also is not acknowledged as disrupting supply lines and raising shipping costs and hence import prices. The entire blame for inflation is placed on wage earners, and the response is to make them the victims of the coming austerity, as if their wages are responsible for bidding up oil prices, food prices and other prices resulting from the crisis. The reality is that they are too debt-strapped to be spendthrifts.

The pretense behind the Fed’s recent increase in its discount rate by 0.75 percent on June 15 (to a paltry range of 1.50% to 1.75%) is that raising interest rates will cure inflation by deterring borrowing to spend on the basic needs that make up the Consumer Price Index and its related GDP deflator. But banks do not finance much consumption, except for credit card debt, which is now less than student loans and automobile loans.

The most immediate effect of the Federal Reserve’s credit tightening will be to reduce America’s home-ownership rate. This rate has been falling since 2008, from nearly 68 percent to just 61 percent today. The decline got underway with President Obama’s eviction of nearly ten million victims of junk mortgages, mainly black and Hispanic debtors. That was the Democratic Party’s alternative to writing down fraudulent mortgage loans to realistic market prices, and reducing their carrying charges to bring them in line with market rental values. The indebted victims of this massive bank fraud were made to suffer, so that Obama’s Wall Street sponsors could keep their predatory gains and indeed, receive massive bailouts. The costs of their fraud fell on bank customers, not on the banks and their stockholders and bondholders.

The effect of discouraging new home buyers by raising interest rates lowers home ownership – the badge of being middle-class. Despite this, the United States is turning into a landlord economy. The Fed’s policy of raising interest rates will greatly increase the interest charges that prospective new home buyers will have to pay, pricing the carrying charge out of reach for many families.

As the United States has become more debt-ridden, more than 50 percent of the value of U.S. real estate already is held by mortgage bankers. Homeowners’ equity – what they own net of their mortgage debt – has fallen even faster than home ownership rates have declined.

Real estate is being transferred from “poor” hands to those of wealthy landlord corporations. Private capital companies – the funds of the One Percent – are going to pick up the pieces to turn homes into rental properties. Higher interest rates will not affect their cost of buying this housing, because they buy for all cash to make profits (actually, real estate rents) as landlords. In another decade the nation’s home ownership rate may fall toward 50 percent, turning the United States into a landlord economy instead of the promised middle-class home ownership economy.

While home ownership rates plunged for the population at large, the Fed’s “Quantitative Easing” increased its subsidy of Wall Street’s financial securities from $1 trillion to $8.2 trillion – of which the largest gain has been in packaged home mortgages. This has kept housing prices from falling and becoming more affordable for home buyers. But the Fed’s support of asset prices saved many insolvent banks – the very largest ones – from going under. Sheila Bair of the FDIC singled out Citigroup, along with Countrywide, Bank of America and the other usual suspects. The working population is not considered to be too big to fail. Its political weight is small by comparison to that of Wall Street banks.

Lowering the discount rate to only about 0.1 percent enabled the banking system to make a bonanza of gains by making mortgage loans at around 3.50 percent. So despite the stock market’s plunge of over 20 percent from nearly 36000 to under 30,000 on June 17, America’s wealthiest One Percent, and indeed the top 10 Percent, have vastly increased their wealth. But most Americans have not benefited from this run up in asset prices, because most stocks and bonds are owned by only the wealthiest layer of the population. For most American families, corporations and government at all levels, the financial boom since 2008 has entailed growing debt. Many families face insolvency as Federal Reserve policy aims to create unemployment. Now that the Covid moratorium on the evictions of renters behind in their payments is expiring, the ranks of the homeless are rising.

The Biden Administration is trying to blame today’s inflation and related distortions on Putin, even using the term “Putin inflation.” The mainstream media follow suit in not explaining to their audience that blocking Russian energy and food exports will cause a food and energy crisis for many countries this summer and autumn. And indeed, beyond: Biden’s military and State Department officers warn that the fight against Russia is just the first step in their war against China’s non-neoliberal economy, and may last twenty years.

That is a long depression. But as Madeline Albright would say, they think that the price is “worth it.” Biden’s cabinet depicts this New Cold War as a fight of the “democratic” United States privatizing economic planning in the hands of the largest banks “too big to fail” and other members of the neo-rentier class, in opposition to “autocratic” China and even Russia treating banking and money creation as a public utility to finance tangible economic growth, not financialization.

There is no evidence that America’s neoliberal New Cold War can restore the nation’s former industrial and related economic power. The economy cannot recover as long as it leaves today’s debt overhead in place. Debt service, housing costs, privatized medical care, student debt and a decaying infrastructure have made the U.S. economy uncompetitive. There is no way to restore its economic viability without reversing these neoliberal policies. But there is little “reality economics” at hand to provide an alternative to the class war inherent in neoliberalism’s belief that the economy and living standards can prosper by purely financial means, by debt leveraging and corporate monopoly rent extraction while the United States has made its manufacturing uncompetitive – seemingly irreversibly.

The rentier class has sought to make America’s neoliberal privatization and financialization irreversible.

It has succeeded to such a degree that there is no party or economic constituency promoting such recovery. Yet the Democratic Party leadership, subjecting the economy to an IMF-style austerity plan, will make this November’s midterm elections unique. For the past half century, the Fed’s role has been to provide easy money to give the ruling party at least the illusion of prosperity to deter voters from electing the opposition party. But this time the Biden Administration are running on a program of financial austerity.

The Party’s identity politics address almost every identity except that of wage-earners and debtors. That does not look like a platform that can succeed. But as the ghost of Margaret Thatcher no doubt is telling them: “There Is No Alternative.”

Michael Hudson is President of The Institute for the Study of Long-Term Economic Trends (ISLET), a Wall Street Financial Analyst, Distinguished Research Professor of Economics at the University of Missouri, Kansas City and author of The Destiny of Civilization (2022), …and forgive them their debts (2018), J is for Junk Economics (2017), Killing the Host (2015), The Bubble and Beyond (2012), Super Imperialism: The Economic Strategy of American Empire (1968 & 2003 & 3rd Edition 2021), Trade, Development and Foreign Debt: A History of Theories of Polarization v. Convergence in the World Economy (1992 & 2009) and of The Myth of Aid (1971), amongst many others. He can be reached via his website Michael Hudson, mh@michael-hudson.com. Originally published June 19, 2022.

2 thoughts on “The Fed’s Austerity Program to Reduce Wages, by Michael Hudson”