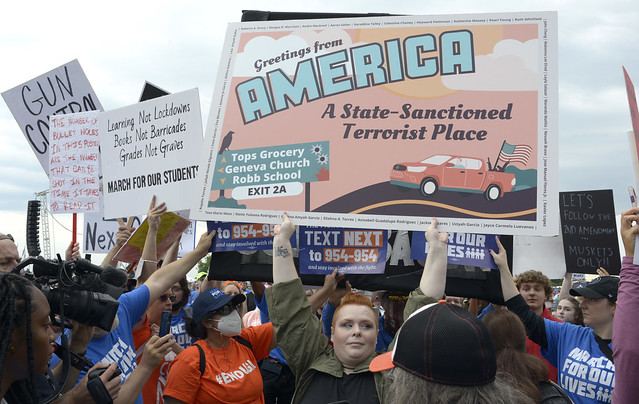 A war zone? No. Just another day in the US. Independence Day, in a nation whose Supreme Court is intent on demolishing independence for half the population, while granting even more rights to those who want to terrorize it.

Even from abroad, I know many of my American friends are feeling anxious. Many are grieving. With each civil liberty being chipped away, they feel helpless as they watch their country slipping steadily down a steep hill toward a Christo-fascist nightmare. Holidays like the 4th of July only make this grief more acute. The absurdity of flags and anthems extolling “freedom” and “liberty” all while those very terms are denuded of any value they may have once had. And now, yet another mass shooting to add to an ever growing list.

In truth, there have always been times in the States where Americans sought to escape their republic. But I’ve definitely noticed an uptick over the past five years. And I’ve had many reach out to me inquiring on how to flee successfully. Yet, I still see so many Americans doing everything they can to prop up the cadaver of American democracy while slapping makeup and perfume on it so as to mask its putrescence. A kind of kabuki theatre of democracy with all the appropriate props for the charade. Regardless of the effort, the writing seems to be on the wall. The US is a failed state where democracy is essentially dead in all but appearance.

If we are to be honest, it was inevitable that the misery the American Empire brought to millions in the Global South would eventually come home. How many democratically elected leaders have been overthrown by the US? How many coups and plots fomented by the CIA? Lumumba? Mosaddegh? Allende? How many Americans have even heard of these people? How many killing fields have been drenched in the blood of innocents thanks to American wars of conquest? Korea? Vietnam? Cambodia? Laos? Panama? Guatemala? Iraq? Libya?

And in reality, the Global South also includes millions of Americans who have been relegated to capitalism’s sacrifice zones. Those who reside on the margins of empire. Forgotten and ridiculed for being poor. Shot by militarized police in the streets or in their homes or incarcerated for being Black. Brutalized, erased and disenfranchised for being Indigenous. Caged and whipped by jackbooted thugs for being undocumented. Maligned and criminalized for being houseless.

None of this is new. After all, the US was built on the soil of a mass grave. Its powdered wig, ethnic cleansing, slave-owning, founders designed the farce that would become the “American Experiment.” White supremacy permeated its roots since its “revolution” was only intended to maintain an economy of slavery and genocide. In fact, its governing houses were constructed by forced labour. A bloody war had to be fought to end slavery, and even after the war was over, it codified racism in segregation while terrorizing Black people with the threat of lynching for decades. Starting with the decimation of the bison, its ecological diversity has been relentlessly raped for material gain. Capitalist exploitation is the sacrosanct religion of the land. In fact, the only thing that has made America “exceptional” has been its ability to convince so many of its subjects that its cruelty is virtuous and ordained by the benevolent hand of the Divine.

Yet even with this rancid past, ordinary people rose up against such tyrannical oppression. Workers protested their exploitation, often falling to the slaughter of federal and state troops. Slaves revolted, often suffering horrifically for doing so. Women, Black and Brown people, Indigenous, Queer and other marginalized segments of society united in solidarity to demand their human rights. People from all walks of life banded together to demand environmental protections. And many times, they succeeded in forcing the hand of power.

But over the last few years these hard won battles have come under brutal attack by a far right that has felt simultaneously threatened as it feels emboldened. As civil rights and liberties are rendered inert, guns proliferate. Mass shootings have become normalized. Membership in white militias is growing. Housing and healthcare are being increasingly allocated toward the rich as a luxury. The demographics of the state are shifting, all while the levers of power in that state are being sequestered by an ever shrinking minority in the ruling class. And this is the essence of fascism: the human, the living and the earth are nothing, the weapon, wealth and power are everything. With the only opposition seeming to lie in the inept, corporate-owned, and thoroughly ineffectual Democratic Party, it is no wonder there are so many feeling disempowered in the face of such blatant, unabashed authoritarianism.

Many liberal, white Americans are feeling anxious today because they are finally experiencing a taste of the brutality their ruling class, with the capitulation of the bourgeoisie, have delivered to millions of people for decades. They are grieving and that can be a positive catalyst. It has the power of uniting people in solidarity against injustice. But it can also be paralyzing. By all accounts, the rise of an even bolder fascism in the US is inevitable. One can only hope that the rise of its nemesis is equally so.

The Fourth is an Annual Day of Collective Amnesia, by Kenn Orphan

5 thoughts on “The American Nightmare, by Kenn Orphan”