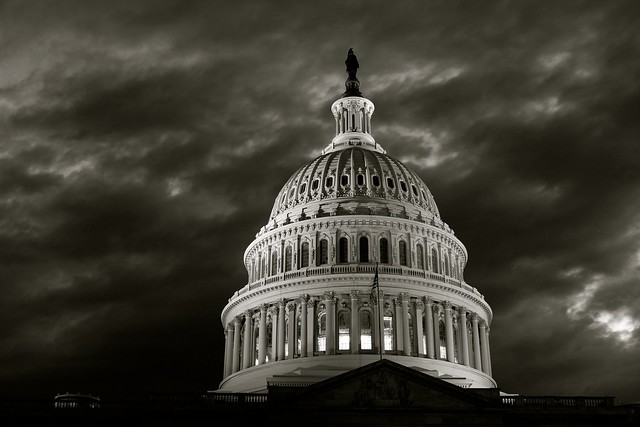 Joe Biden signed into law today the “Inflation Reduction Act” — a package of environmental, health care and tax measures that the administration is trumpeting as one of its crowning legislative achievements. But in reality, it represents a drop in the bucket compared to the scale of social crises workers are facing on multiple fronts.

The Inflation Reduction Act will not actually have an impact on inflation. The Congressional Budget Office estimates that the bill will have no effect on inflation in 2022, and cause inflation to either go up or down by one-tenth of one percentage point in 2023. In reality, this bill is what is left of the “Build Back Better” social agenda pushed by Biden at the beginning of his term. It was simply given the title it has to make it more palatable to right-wing Democratic Senator Joe Manchin, who is effectively opposed in principle to the creation of any social programs.

What Biden was originally proposing, starting with a major address in April 2021, would in fact have made a major difference in the lives of tens of millions of people. This wide ranging reform agenda included, among other things, universal pre-K, heavy subsidies for child care, making community college free, guaranteeing 12 weeks of paid family and medical leave, monthly payments to working-class parents, major investments in public housing and hundreds of billions of dollars worth of environmental spending — the centerpiece of which was a program to transition to renewable electricity generation. In total, the Biden administration wanted to spend $3.5 trillion over the course of 10 years on “Build Back Better.”

But instead of fighting the right wingers inside his own party — most notably Senators Manchin and Kyrsten Sinema — Biden decided to adopt a policy of appeasement that ended in disaster. After an initial phase of negotiations, the bill was slashed in half to $1.7 trillion. But even that ended up being insufficient to appease Manchin, who went on Fox News in December to announce that he was pulling out of negotiations entirely.

With the prospect of a midterm election disaster looming, Manchin made a surprise return to negotiations last month and he and the White House announced a deal less than one-eighth the size of what the administration was initially pursuing. This is how we ended up with the “Inflation Reduction Act.”

There are still positive measures that remain in the bill that was just signed into law. In total, the act allocates $370 billion for measures to protect the environment and combat climate change. This primarily comes in the form of tax credits to companies involved in the production of renewable energy and the development of green technologies. This is a small fraction of what it would cost to truly transform electricity production, transportation and agriculture in the United States, but it does still represent a break from the near total inaction that prevailed up to this point on the climate crisis.

Starting in 2026, Medicare will be able to negotiate with pharmaceutical corporations over the price of 10 drugs and eventually 20 drugs. While it is an outrage that these negotiations cannot take place immediately over the price of all medications, this still will save over $100 billion over the course of the next 10 years — a testament to how extreme big pharma’s price gouging is. Out-of-pocket expenses for people enrolled in Medicare will now be capped at $2,000. The act also extends for three years an expansion in subsidies available on the Affordable Care Act health insurance marketplaces.

But mixed in are measures that actively undermine the stated aims of the bill. In order to get Manchin’s approval for the environmental measures that are included, Biden conceded to a policy that would open up tens of millions of acres of publicly owned land to oil and gas drilling. The Bureau of Land Management is compelled under the law to issue leases to fossil fuel corporations at a rate tied to the number of leases issued for the use of land for renewable energy infrastructure like solar panels or wind turbines. A side deal was reportedly made between Joe Manchin and Senate Majority Leader Chuck Schumer to pass separate legislation making it easier to construct hazardous pipelines by reducing environmental standards in the permitting process.

The act imposes a minimum corporate tax on companies making over $1 billion a year of 15 percent. Under previously-existing law, corporations were supposed to be paying a tax rate of 21 percent, but because of loopholes and write-offs many huge monopolies regularly pay well below 15 percent. However, a modification to the law pushed by Senator Kyrsten Sinema and supported by six other Democrats along with every Republican effectively exempted private equity managers — a type of finance capital firm. These Wall Street financiers will save $35 billion because of this intervention by their bought-and-paid-for politicians.

The idea that this new law will be sufficient to fundamentally turn around the bleak political fortunes of the Biden administration is a fantasy. Only a bold program of social transformation aimed at tackling inequality in all its forms can mobilize people in sufficient numbers in a moment of crisis like this and turn back the rising tide of the far right, which is aiming to recapture control of the federal government in the wake of the Democrats’ utter failure to deliver.

© Copyright 2022, Content may be reproduced with credit to LiberationNews.org.