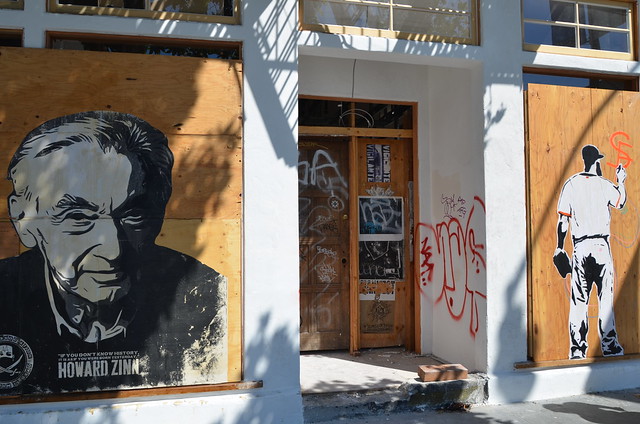 Documentary in which professor Howard Zinn recounts his life as a writer, educator, and leader in nonviolent social protest.

His story is one of being in “the right place at the right time,” from poor beginnings, working in shipyard unions, fighting in WWII as a bomber pilot, and then launching his academic career as one of the first white professors to teach at the historically black Spelman College in Atlanta, Georgia. He helped spark the civil rights protest there, and soon moved to Boston College where he became a key figure in organizing anti-Vietnam protests.

The historical span of the film concludes with Zinn protesting the war on Iraq. The documentary captures a year in Zinn’s life, including his winning of the 2003 Prix des Amis du Monde diplomatique. Testimonials from the likes of Alice Walker (a student of Zinn’s at Spelman) and Noam Chomsky put his contributions to the peace and civil rights movements in a broader perspective. Matt Damon narrates and the score includes songs by Woody Guthrie, Billy Bragg, and Eddie Vedder.

In this presentation of The Massachusetts School of Law’s program, Books of Our Times, Dean Lawrence R. Velvel interviews American Historian Howard Zinn on his books: You Can’t Be Neutral on a Moving Train – A personal History of Our Times, and Failure To Quit – Reflections of an Optimistic Historian. The discussion ranges from Mr. Zinn’s optimism for the future and what true Patriotism is, to what Americans don’t want to hear.

One thought on “Howard Zinn: You Can’t Be Neutral On A Moving Train”