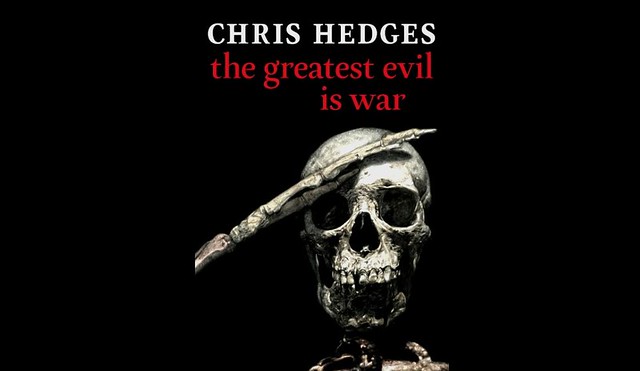 Ralph invites back award-winning war correspondent and author, Chris Hedges, to discuss his new book The Greatest Evil Is War in which he points out that war is not only a racket but – no matter what its causes – a moral obscenity.

And Mark Green joins us to elaborate on “Winning America” a compendium of rhetorical strategies and concrete policies Democrats should be running on to win the midterm elections. Plus, we plug Tort Law Education Day!

Chris Hedges is a Pulitzer Prize-winning journalist, who spent nearly two decades as a foreign correspondent in Central America, the Middle East, Africa and the Balkans. He is the host of The Chris Hedges Report, and he is a prolific author— his latest book is The Greatest Evil Is War.

“Unchecked militarism is cancerous to a civilization. And it overreaches in the end. So, as it decays— as we have decayed — it engages in more forms of military adventurism in an attempt to reclaim a lost hegemony and a lost glory and a lost power.” — Chris Hedges, author of The Greatest Evil Is War

“Democratic administrations are wholly in lockstep with the Republicans on militarism. In some cases, even worse, because they provide more cover… So, we have to hold those who prosecute permanent war— Democrat or Republican— accountable. And I think that by surrendering to a Democratic administration in the idea that it’s “the least worst,” we weaken our power and our credibility.” — Chris Hedges, author of The Greatest Evil Is War

Chris Hedges returned to The Sanctuary for Independent Media in Troy NY on October 21, 2022 to speak on the subject of his latest book, titled The Greatest Evil is War (Seven Stories Press). This unflinching indictment of the horror and obscenity of war draws from experience and interviews for a book that looks at the hidden costs of war, what it does to individuals, families, communities, and nations.

Chris Hedges Is Right: The Greatest Evil Is War, by David Swanson

8 thoughts on “Chris Hedges and Ralph Nader: Unchecked Militarism is Cancerous to a Civilization + Hedges: The Greatest Evil is War”